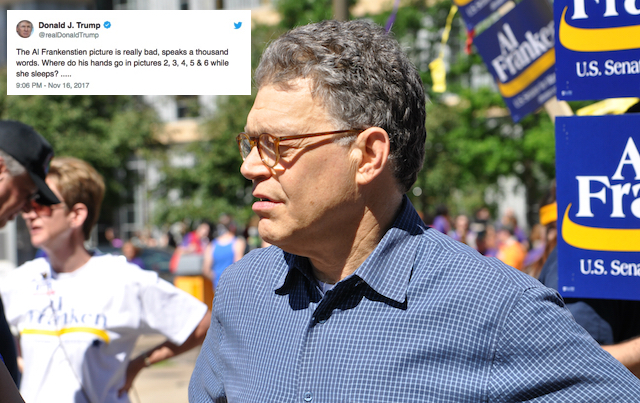 It’s been more than a week since the first allegations against Republican Senate candidate Roy Moore broke. Since then, more women have come forward to describe the sexual advances and assault Moore committed against them, many while they were minors. It’s come out that he was banned from both a YMCA and the Alabama mall where he, then in his 30s, would try to pick up teenage girls.

While a number of Republicans have condemned Moore’s actions, Donald Trump is not among them. Maybe he’s still embarrassed by supporting Moore’s opponent in the primary. Maybe he doesn’t want to do anything to risk losing that seat to a Democrat. Maybe he simply doesn’t care. Whatever the reason (all three, probably), Trump hasn’t said a word about Moore and whether he thinks he should step down, something Moore refuses to do.

But about 12 hours after Leeann Tweeden published her account of being assaulted by Al Franken, we got this:

.And to think that just last week he was lecturing anyone who would listen about sexual harassment and respect for women. Lesley Stahl tape?

I said this when talking about Franken yesterday, but I will scream it from the internet rooftops until it sinks in: WOMEN ARE NOT YOUR GODDAMN PROPS. Donald Trump doesn’t care about Leeann Tweeden. He doesn’t care about sexual harassment or “respect for women.” To him, these things are simply ammunition to take down his political opponents. He can’t even keep from sexually objectifying her in his fake condemnation of sexual assault. I assume that first tweet is supposed to be something of a mean joke, but it’s at Tweeden’s expense more than Franken’s. Trump can’t even concern troll convincingly.

By highlighting Franken’s hypocrisy, Trump is putting him in the same category as Moore so that he can pretend he cares about the issue without having to criticize a Republican or address the many accusations that have been made against himself. It’s some standard “whataboutism,” a maddeningly effective tactic John Oliver recently delved into. If you missed his segment on it, it’s definitely worth a watch.

Trump and his supporters have been calling out a double standard of not just Franken’s behavior, but a presumed silence coming from other Democrats and their supporters on the left. The idea is to prove that Dems are just as bad as Republicans, and therefore we can’t criticize anyone. But as Oliver says in that clip there, “Even if you believe that Democrats are guilty of a double standard, the solution is not to have no standard whatsoever.”

Except in this case, Democrats are addressing the issue at hand. Republicans and Democrats alike (including Franken himself) have been calling for an ethics investigation. No one is ignoring this.

And because of that, Trump’s sanctimonious deflection is glaringly transparent.

President Trump, who was caught on tape bragging about assaulting women, still hasn't commented on the allegations against Roy Moore harassing underaged girls, but tweets this about Senator Al Franken pic.twitter.com/FNdOPXi4x7

Trump has more than a dozen, on-the-record, allegations of sexual assault against him, and was caught on tape bragging about committing sexual assault. This is a dangerous game for him to play. https://t.co/seUnYcBuhU

“I’m automatically attracted to beautiful women — I just start kissing them, it’s like a magnet. Just kiss. I don’t even wait. And when you’re a star, they let you do it. You can do anything.” https://t.co/x6E8KNzURU

You should probably just shut the hell up about this topic – you know, being an accused rapist and confessed sexual predator and all. https://t.co/P03aOlUxRM

Hello we are in the fucking upside down https://t.co/fpUhgJAlTY

Trump comments on others' sexual misconduct exemplify his cynical, dangerous view of leadership where moral authority derives from power versus any common set of values.

Trump on Franken: Pot discusses sins of the kettle.

Trump’s “whataboutism” very often works as a deflection and a distraction. But his assumption that other people care as little about women and sexual assault as he does has spectacularly backfired here.

Plus, the icing on the turd cake: He misspelled Frankenstein. He literally can do nothing right.