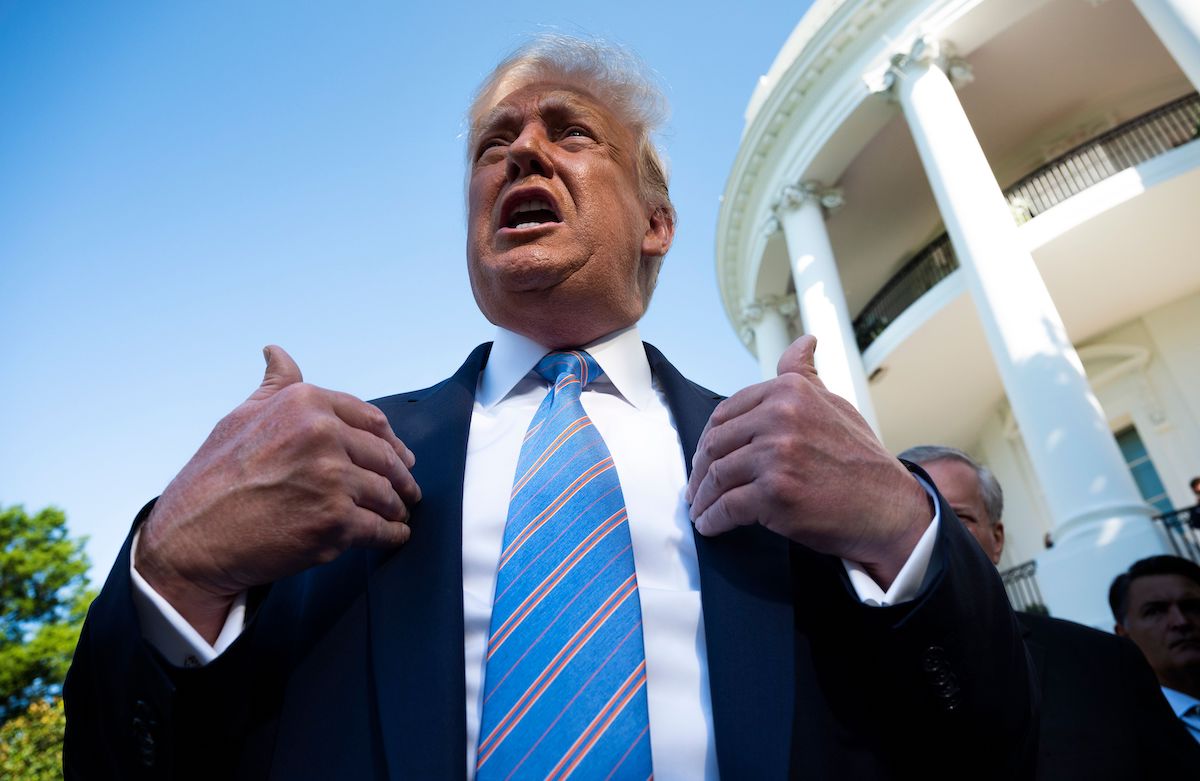 We are less than 100 days out from the presidential election, and Donald Trump is feeling the heat. The president is leaning into his claim that a Biden presidency would be a radical socialist free-for-all, which is laughable considering Biden is a known moderate. In his latest unhinged tirade, Trump spoke to a crowd of supporters on the tarmac of the Cleveland airport, where he said the following:

Trump on Biden:
“No religion, no anything. Hurt the Bible, hurt God. He’s against God, he’s against guns, he’s against energy, our kind of energy.” pic.twitter.com/KvFS2ShcAZ

In his rambling word salad, Trump claimed of Biden, “Take away your guns, take away your Second Amendment. No religion, no anything. Hurt the Bible, hurt God. He’s against God, he’s against guns, he’s against energy, our kind of energy.” The irony of course, is that President Two Corinthians is lecturing Biden, who is a practicing Catholic.

Andrew Bates, a spokesman for the Biden campaign, released a statement saying, “Joe Biden’s faith is at the core of who he is; he’s lived it with dignity his entire life, and it’s been a source of strength and comfort in times of extreme hardship,” adding, “Donald Trump is the only president in our history to have tear-gassed peaceful Americans and thrown a priest out of his church just so he could profane it – and a Bible – for his own cynical optics as he sought to tear our nation apart at a moment of crisis and pain … And this comes just one day after Trump’s campaign abused a photo of Joe Biden praying in church to demean him, in one of the starkest expressions of weakness throughout this whole campaign.”

Trump’s claims lack any sort of reason and sense. After all, the bible is an inanimate object, so it can’t be hurt. If objects could be hurt, then I better apologize to the 10,000 cans of Diet Coke I’ve crushed in my lifetime. Secondly, if God exists, I doubt he fears a 77-year-old Scrantonian. After all, Joe Biden isn’t Bartleby from Dogma. Get a grip, Trump.

Of course, Twitter is here to dunk on Trump and wonder how Biden plans to defeat the almighty. Flaming sword? An ice cream cone in each hand? Repeatedly saying “come on, man!” until Yahweh finally relents? The possibilities are endless …

Trump, referencing Biden: “No religion, no anything, hurt the Bible, hurt God…He’s against God.”

Out of all the ridiculous lies he’s uttered, Trump saying Biden is against God and will hurt the Bible is right up there in the Top 5 of Stupid Crap Trump says. You know, it’s be like saying Trump is against golf and will hurt Putin.

Trump is now saying that if we elect Joe Biden it will “hurt God” and that Biden is “against the Bible, against God.”

Biden isn’t the one breaking nearly all of the Ten Commandments, so this is just another lie…which shouldn’t appease God, either. pic.twitter.com/GtVZLazHpi

“no religion, no anything

(Biden is a practicing Catholic. Trump does not appear to practice any religious faith)

God did not immediately respond to a request for comment.

God created the universe but he has never faced an adversary as powerful as Biden. Lmao.

You know you’re going down for the third time when you claim your opponent has the power to hurt God. Trump is a pathetic excuse for a human being.

Trump says Joe Biden has the power to “hurt God.”

You’d be a fool not to vote for a guy with that kind of power!

i once saw joe biden kick god in the balls outside a ramones concert. the media is too afraid to report this

I don’t think you can argue that Joe Biden is weak and then claim that he hurts God.

(via The Hill, image: JIM WATSON/AFP via Getty Images)