The president was referring to MSNBC's Ali Velshi, who was hit with a rubber bullet during the George Floyd protests. 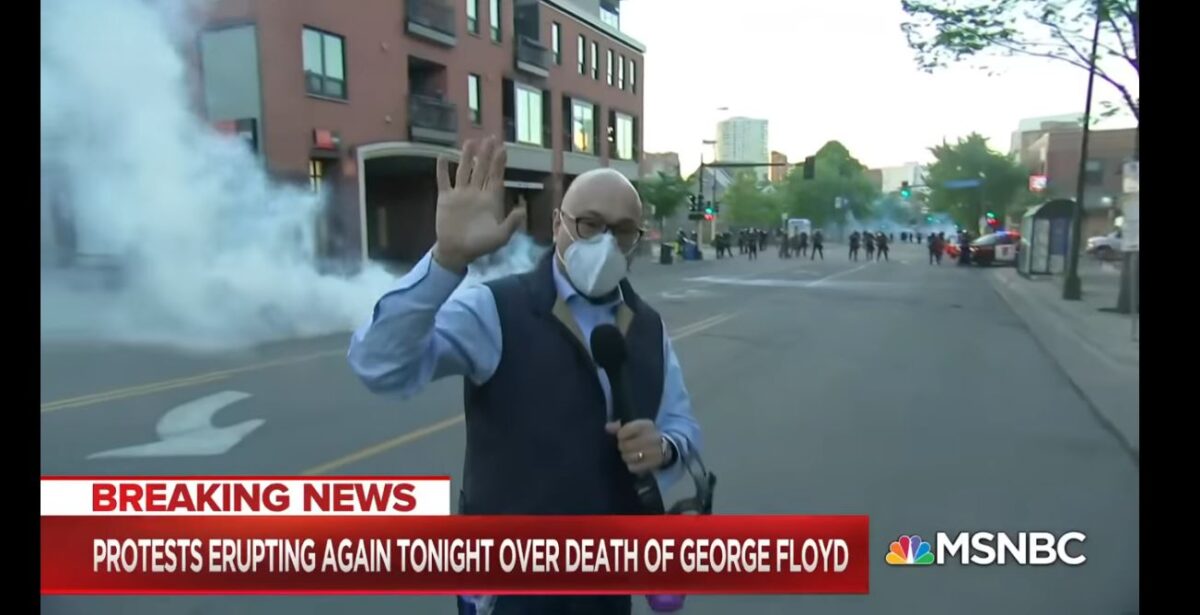 Just when we think Donald Trump can’t get crueler, more authoritarian, or more vindictive, he plummets to new depths. During a campaign rally in Minnesota, the president discussed MSNBC host Ali Velshi getting shot in the knee with a rubber bullet by the police during the George Floyd riots in May. Trump mocked Velshi and crowed, “It was the most beautiful thing … it’s called law and order,” to his crowd of cheering sycophants. In any other universe, a president mocking a wounded journalist would be an international scandal. In Trump world, it’s just another Saturday.

Trump gloated, “I remember this guy Velshi, … He got hit in the knee with a canister of tear gas and he went down. He was down. ‘My knee, my knee.’ Nobody cared, these guys didn’t care, they moved him aside.” He continued, “And they just walked right through. It was the most beautiful thing, … No, because after we take all that crap for weeks and weeks, and you finally see men get up there and go right through them, wasn’t it really a beautiful sight? It’s called law and order.”

"It was the most beautiful thing … it's called law and order" — Trump gloats about @AliVelshi getting hit by a rubber bullet in Minneapolis. Sick stuff. pic.twitter.com/bgKSmmL8O7

So, @realDonaldTrump, you call my getting hit by authorities in Minneapolis on 5/30/20 (by a rubber bullet, btw, not a tear gas cannister) a “beautiful thing” called “law and order”. What law did I break while covering an entirely peaceful (yes, entirely peaceful) march?

MSNBC released a statement saying, “Freedom of the press is a pillar of our democracy. When the president mocks a journalist for the injury he sustained while putting himself in harm’s way to inform the public, he endangers thousands of other journalists and undermines our freedoms.”

It’s important to note that Velshi was born in Nairobi, Kenya, and is Muslim. I doubt Trump would have celebrated the shooting of a white journalist in such a manner.

This news story will be a blip in the relentless bad news tornado that is 2020. But it’s still shocking and sobering that an American president would celebrate the shooting of an American journalist. It’s a reminder of just how far from normal this presidency is, and how little accountability Trump is held to. It’s also a brutal reminder that Trump and his followers believe the press is the enemy of the people.

Fellow journalists and politicians took to social media to condemn the president’s words:

In all of my years covering wars and authoritarian leaders around the world and even with their disdain for a free media, I have never heard one of those leaders call the shooting, targeting and/or injury of a reporter “a beautiful thing” the way Trump has spoken about @AliVelshi https://t.co/jFWFWJbrLE

.@AliVelshi is an excellent journalist & a good, decent human being. So of course Trump thought it was “law & order” when he was shot with rubber bullets while covering protests & I can’t help but wonder if that has anything to do with the fact that he’s foreign born & Muslim. https://t.co/5UhtGljdlt

To be clear…@AliVelshi is a pros’s pro who goes wherever the story takes us. He has risked his safety and comfort to report facts. He should not be mocked. His ilk should be applauded. Let’s stop booing the refs.

There is no one more kind or more professional than @AliVelshi https://t.co/2xsl7wBMSb

Absolutely heinous. @AliVelshi didn’t deserve to be shot by a rubber bullet, anyone celebrating that violence has something wrong with them, and it’s twisted for anyone least of all a president to call it “law and order.” No journalist should find this acceptable. https://t.co/1VDhdfoL1H

This is disgusting. Shame on you President @realDonaldTrump.
Ali Velshi is a brilliant journalist who was injured doing his job. For you to celebrate that is despicable. https://t.co/yZI6Xt1h5Y

Trump gets a cheer for wanting my friend @AliVelshi to be injured & lying about what really happened to Ali in his brave live reporting. https://t.co/PXVls8dyrL