We Need to Talk About What a Monster Joe Arpaio Is, and What That Means About Donald Trump 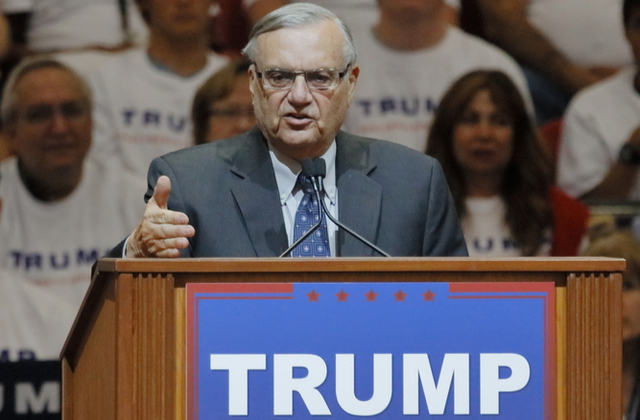 Until last week, Joe Arpaio wasn’t a name that was on many casual news consumers’ radar. At least, not outside of Arizona, where he served as the Sheriff of Maricopa County from 1993 until 2016. Trump’s sudden pardon last week brought Arpaio into the national spotlight, but I’m guessing a lot of people still only know him as ‘the racist Sherrif Trump pardoned.’ That’s about all I knew of him–that he represented the most racist, unjust elements of law enforcement. But the more we learn about the details of his career, the more it becomes apparent that Arpaio isn’t just an awful man; he’s a monster wearing a human’s body.

While he may not have been known by many outside of Arizona, the Phoenix Sun Times has been covering Arpaio for more than 20 years, and following Trump’s pardon, they wanted to make sure all of America knew who this man was.

I have to warn you now. This thread, like the man, is disturbing.

We've been covering Joe Arpaio for more than 20 years. Here's a couple of things you should know about him… 1/many

You may have heard of Arpaio’s infamous “Tent City” jail, which he himself referred to as a “concentration camp.”

He ran a jail that he described as a “concentration camp.” https://t.co/5MNt2lxOyw

He opened the camp in 1993 to ease jail overcrowding. Accounts of the inhumane treatment inside the camp are horrifying. During the Arizona summers, temperatures in the outdoor complex could reach or pass 120 degrees. (Arpaio himself once seemed to brag that thermometers hung high inside the tents, where heat rises, could pass 140 degrees.) Prisoners died often, sometimes with no explanation.

Prisoners there died at an alarming rate, often without explanation. https://t.co/wriqDix6EA

Inmates in Arpaio’s jails were often denied medical treatment, including those with chronic illnesses, as well as pregnant women.

The stories from inmates are harrowing.

Here’s a couple of other examples of what went on in his jails: https://t.co/lX0xV7dyNg

Arpaio also utilized humiliation and other forms of emotional torture.

He ran an ongoing “mugshot of the day” contest on the Maricopa County Sheriff’s Office website. https://t.co/n9hyv0u6Xd

Unsurprisingly for a man who built his career on what was eventually deemed illegal application of immigration laws, he cruelly targeted Latino inmates.

One time, as a publicity stunt, he marched Latino prisoners into a segregated area with electric fencing. https://t.co/DYeyFUDhbD

And then there are the crimes he willfully refuses to give a shit about.

Under him, the MCSO failed to investigate hundreds of sex abuse cases, many of which involved children.https://t.co/CdsU0p9dZo

Oh, he also once staged his own assassination attempt. The man he framed spent four years in prison and his settlement cost tax payers over a million dollars.

Oh, and one time he staged an assassination attempt against himself? That was weird. https://t.co/KboxuTwYXe

Those who worked under Arpaio seem to follow in his despicable footsteps.

For Nat'l Dog Day let's remember the time JoeArpaio's Deputies set a puppy on fire, laughing at its sobbing owner as it died a ghastly death pic.twitter.com/4bGuwUIR9u

But of all of these crimes, the one he was found guilty of, and then pardoned for, was contempt of court.

In 2013, a federal judge confirmed what literally everyone in Phoenix knew: he’d been racially profiling Latinos. https://t.co/2uYZLMdnwt

The judge ordered Arpaio to stop racially profiling. No more pulling over Latino drivers for no reason or otherwise investigating and detaining people based on nothing but their race. But he’s not going to let some judge stand between him and his racist ways. (He also hired a PI to investigate the judge and his wife.)

He also kept on profiling people, which is why he got charged with contempt of court (and was found to be guilty AF) https://t.co/PycurAtivk

Over the course of his career, he cost tax payers tens of millions of dollars in settlement payments.

By 2015, his fondness for racial profiling had cost the county more $44 million. On top of, you know, ruining lives. https://t.co/zlLg6kCsUf

He also paid millions to settle lawsuits like this one, where deputies stood by as an inmate was brutally beaten. https://t.co/WppUM1vPOs

This is the man Trump pardoned. And it wasn’t just a regular pardon. Not only did Trump skip all the typical steps involved in issuing clemency (like a review by the Justice Department), but–and this is truly baffling–Arpaio didn’t even ask for the pardon. Trump just decided to give it to him. That is not how that usually works.

So why did he do it, and what does this tell us about Trump other than that he’s just as awful as we already knew he was? Well, it sets the stage for a number of things. To start, it’s a clear message to racists in law enforcement that they’re doing a-okay. No one is going to stop them from abusing their power, especially when it comes to targeting immigrants.

It’s also hard not to see this as an attack on journalists, as Arpaio hates the media maybe as much as Trump does. He’s had to pay millions in settlements after having reporters arrested.

He arrested New Times reporters for covering him. We won a $3.75 million settlement for that one. https://t.co/tB97Xtg5ig

This also creates a far-reaching, incredibly dangerous precedent for future abuse of Trump’s power to pardon. We’ve already seen the sort of incestuous nepotism that guides this administration. Trump has given jobs and opportunities not just to his actual family, but to former business associates. If he built his business empire on back scratching, a lot of those favors seem to be getting cashed in on as Trump builds policy and tax codes designed to favor his billionaire business friends. Now a precedent has been set that not even actual convictions can stop Trump’s friends from whatever illegal activity they want to partake in.

There’s even been question of whether this could extend to those involved in the Russia investigation, like Paul Manafort and Michael Flynn. What is to make them comply with subpoenas to testify if Trump will simply pardon them for doing so? Would Trump do that? It would almost certainly constitute obstruction of justice, clear grounds for impeachment. But could he do it? Sure. It seems like every day he’s setting new precedents for previously unthinkable behavior.