The party of family values 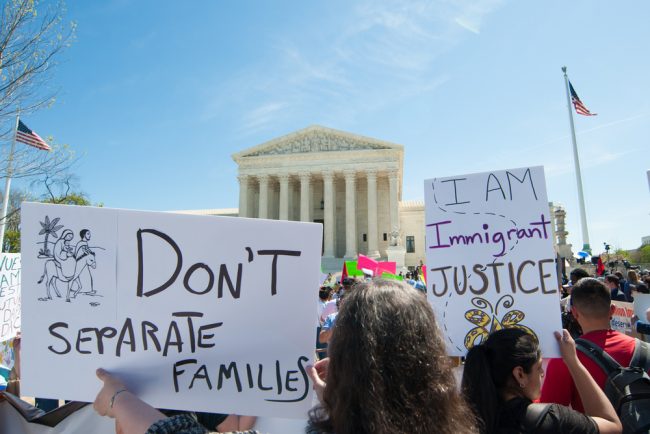 According to three officials who spoke with Reuters, the Trump administration is considering taking their dehumanization of immigrants to the next level. In a town hall for asylum officers, the Department of Homeland Security (DHS) reportedly briefed officials on a proposal to separate parents and children who are apprehended crossing illegally into the United States, in order to “deter mothers from migrating to the United States with their children.”

If implemented, the new policy would keep parents in detention centers and place children into protective custody with the Department of Health and Human Services until they can be housed with a U.S. relative or state-appointed guardian.

Trump has repeatedly called for the end of “catch and release,” a policy which allows undocumented immigrants to reside freely in the United States, rather than in detention centers, until their legal matters can be addressed in court. This policy was enacted in part because of the realities of the U.S. legal system. Immigration cases–particularly asylum applications–can take months or years to resolve. It would be both inhumane and expensive to hold people in detention for such a long period of time. In addition, the prolonged detention of children has already been banned by the 9th U.S. Circuit Court of Appeals, for obvious human rights reasons.

However, the prolonged detention of adults was not banned by the courts, which is where I suspect the real deviousness of this Trump proposal comes in. By separating children from their parents, the administration could be free to detain adults for inhumane lengths of time while releasing their children to protective custody or another guardian. This would allow the administration to end “catch and release” without the threat of a legal challenge on behalf of any affected children. (I’m not a lawyer, though, so I may be entirely off-base. None of this constitutes legal advice.)

DHS, in a bleakly ridiculous statement, tried to justify their new proposal as motivated by safety concerns. “The journey north is a dangerous one with too many situations where children – brought by parents, relatives or smugglers – are often exploited, abused or may even lose their lives,” an official said. “With safety in mind, the Department of Homeland Security continually explores options that may discourage those from even beginning the journey.”

This statement reveals a profound ignorance of what many who flee to the United States are facing in their home countries. Many of those who are apprehended at the border are asylum seekers fleeing violence, political reprisal, and the upheaval of the rule of law. They are not motivated to flee because they anticipate a rosy welcome in the United States (especially not under this administration). They’re motivated to flee because the situation in their home country has become so deadly. If the administration wants to “discourage” migrants from beginning their journey to the U.S., they should help the people of Central America to fight the gangs and corrupt militias terrorizing their countries. They should even–call me crazy–look at how the United States’ “war on drugs” fuels that violence and adjust policy accordingly.

In addition to being disgusting, the proposed family separation policy would be expensive and difficult to implement. “You are talking about a pretty rapid increase in the detention population if you are going to do this,” said Randy Capps, of the nonprofit Migration Policy Institute. “The question is really how much detention can they afford.” The Trump administration has been pretty open about its commitment to expanding detention centers, and I don’t think there’s much doubt that Paul Ryan will find them the money. For me, the more important question is what conditions would be like for those immigrants who are detained while demand exceeds capacity. Further crowding an already overcrowded detention system is a human rights disaster waiting to happen.

U.S. Representative Henry Cuellar (D-TX), whose constituency includes about 200 miles of the border with Mexico, named the proposal for what it is: wrong. “Bottom line: separating mothers and children is wrong,” he said, “That type of thing is where we depart from border security and get into violating human rights.”

(Via Jezebel and Reuters; image via Shutterstock)