The True Size of Africa 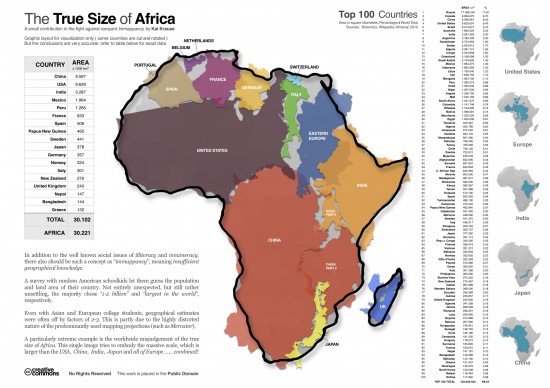 Very good, very well-researched illustration by Kai Krause illustrating just how mammoth Africa is. You could fit China, the US, India, Mexico, and Japan in it and still have room for a good chunk of Europe!

In addition to the well known social issues of illiteracy and innumeracy, there also should be such a concept as “immappancy”, meaning insufficient geographical knowledge.

A survey with random American schoolkids let them guess the population and land area of their country. Not entirely unexpected, but still rather unsettling, the majority chose “1-2 billion” and “largest in the world”, respectively.

Even with Asian and European college students, geographical estimates were often off by factors of 2-3. This is partly due to the highly distorted nature of the predominantly used mapping projections (such as Mercator).

A particularly extreme example is the worldwide misjudgement [sic] of the true size of Africa. This single image tries to embody the massive scale, which is larger than the USA, China, India, Japan, and all of Europe……. combined!