Do We Really Need Another Season of True Detective? | The Mary Sue

Do We Really Need Another Season of True Detective? 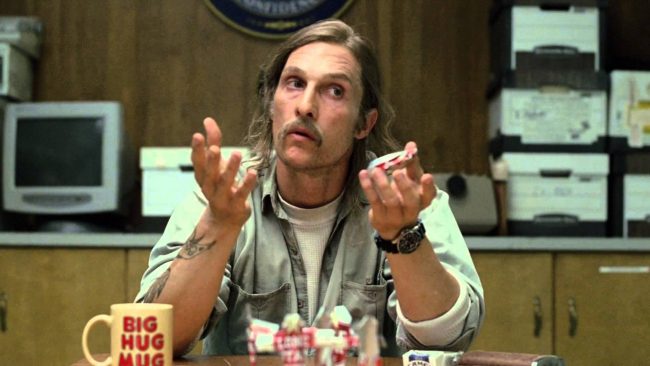 Reports are pouring in that despite being off the air for two years, HBO’s True Detective is coming back for a third season. After the second season, we have to ask: is this really necessary?

If you’ve forgotten all about True Detective during its long hiatus, here’s a refresher. The first season, starring Matthew McConaughey and Woody Harrelson as a pair of mismatched detective partners on the hunt for a creepy killer, had an off-beat sensibility and sparked fascination in its audience.

Theories about the central mystery ran rampant and people were reading The King in Yellow, a book of short stories from 1895 intimately bound up with the plot. While the show was on, the fan excitement in parsing “clues” reminded me of early Lost.

I watched the entire first season on an airplane, rapt, and loved its quirky, existential intensity. It wasn’t easy or fun watching, but True Detective‘s freshman effort felt well-made and different, and it raked in awards and accolades for the cast, writers, and production.

It’s hard to have lightning strike twice, and season two—which starred the imitable Colin Farrell and Rachel McAdams—was … not electric.  The show retained its ratings, but was widely lambasted by critics and fans. HBO’s president of programming blamed himself for rushing show creator Nic Pizzolatto, in a mad dash to double down on the first season’s popularity.

Well, it’s been two years, and apparently, Pizzolatto has gotten his wind back. Reports say that he’s working on season three with the help of David Milch, a creative force behind HBO’s Deadwood. The collaboration with Milch has Nerdist speculating that season three could be a Western. My speculation is whether the world is really clamoring for a new True Detective at all.

One of the strengths of BBC dramas is that they know when to end. Many brilliant shows only plan out a season or two and then they are finished, in all of their glory. In Hollywood nothing successful can ever be thrown out until far past its expiration date. I would much rather remember the greatness of True Detective season one rather than see it struggle again. What do you think? Am I worrying for nothing?

(via Variety, images via HBO)