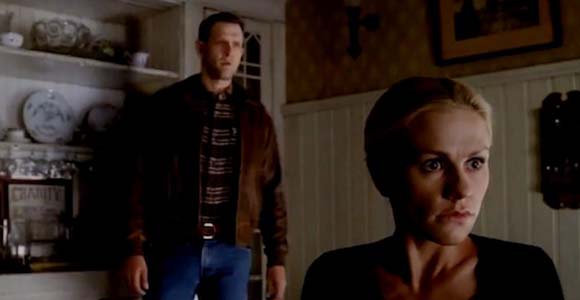 We picked up where we left off last week, Sookie and Ben/Warlow making out and then her turning on him with her faery powers. He is intent on keeping to his story, that he’s actually a good guy who likes her but drops a huge bomb. He lets her know the night her parents died, they were actually trying to kill her and he only killed them to save her life.

Before they can really get into that, Bill shows up after having a flashback and realizes Warlow is Lilith’s progeny, and is able to use his maker powers to take him away. We see Warlow with his people in 3500 B.C., his first meeting with Lilith, turning, the massacre and eventual murder attempt of his maker.

At Bill’s house, Jessica is high on tons of faery blood and tries to make out with Bill. Gross. Andy, still searching for his lost children, goes there and finds them all dead. Almost. There’s one still alive, and while Jessica hides from what she did, he leaves to find some vampire blood to revive his daughter. It works but before she goes to rest, she tells Andy everything. That it was Jessica who killed her sisters and that Bill was experimenting on their blood. Holly warns him against going after him and for now it seems he’s listening.

Tara goes to Eric to let him know Pam was taken by the vampire police and both get themselves arrested in order to gain entrance to the facility. As Pam is being processes, she sees all the insane testing going on. Which just happens to include vampires having sex. We aren’t surprised, are we? However, it also includes a test in which vampires must battle it our between each other and a therapy session. Pam agrees to tell the therapist whatever he wants in exchange for a live donor.

Down at “The Unfriendly Possum,” Alcide is questioning other werewolves about Sam’s whereabouts. According to his father, who was already drinking there, backwoods wolves don’t like city wolves. They have a fight, because that’s all Alcide is good for now and part ways. But a quick stop at the post-coital hotel room of Sam and Nicole reveals Alcide’s father staying nearby. Perhaps this will get his son to calm the hell down? Probably not.

The Governor and Sarah Newlan are having a lovers spat over his newly vamped daughter Willa. Sarah’s solution?  Talk about having a baby with him. He’s not too keen on the idea and feeling rejected, Sarah goes off to find Jason and have wild, soul-saving sex with him. All’s well and good until Jessica shows up, still quite high, and still quite horny. Nothing happens between her and Jason sexually but they do have a good talk about their “relationship.” That is, until Sarah comes out of the bedroom and somehow rescinds Jessica’s invitation to Jason’s house. She’s quickly nabbed by the vampire police as well. 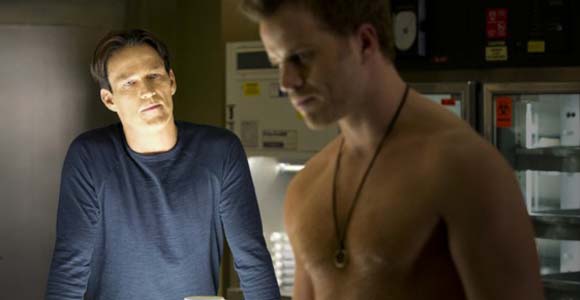 Back at the facility, Jessica finds Tara and explains what happens. When not interested in the government issues blood supplement (because she’s super full on faery blood), other inmates try to attack her but another stops them. Apparently there’s already a hierarchy in the vampire prison. Meanwhile, Pam is still being brutally honest with the therapist, telling him she doesn’t value human life and that vampires move past their pain because it’s stupid to dwell on it when you live that long.

Willa is a “VIP” at the facility, although that doesn’t stop a creepy guard from making sexual advances at her. Sarah returns to tell the Governor they have good news. And for some reason, Steve Newlan is allowed to take part in the fun. They’ve “captured” Eric and the Governor is keen on having a chat with him. But it doesn’t stop there, the Newlans have set up more vampire entertainment. Pam is put into the same holding cell and both her and Eric are given stakes. She told the therapist one lie, that she didn’t care for Eric any longer. We know she does but she’s still really pissed off, so it should be interesting to see how that scenario shakes out.

Sookie decides she must know the truth about her parents, no matter what. She fills our resident “helper,” Lafayette, in on the latest drama. In between all this, Terry has as strange conversation with an old military buddy named Justin who is all-too willing to kill him when Terry asks to be put out of his misery. That’s supposed to happen in the next few days.

Lafayette starts up a seance at Sookie’s house and is overwhelmed by her parents’ spirits. When Sookie grabs his hand, we see flashbacks of Ben/Warlow telling them Sookie is his intended and that she’s destined for great things. While her mother is simply confused, her father wants to kill Sookie instead. Lafayette becomes possessed by his spirit to finish the job. So Sookie now knows the truth but she’s being drowned by her father’s spirit. This woman needs to move to Antarctica.

I hate to harp on the Lafayette thing again, especially when he got to do more than any other episode so far this season, but he still has no storyline of his own. Doesn’t look like he’ll get one this season at all by the look of it. The vampire prison is certainly providing a lot of fun but I’m more preoccupied as to whether or not Sookie is actually going to be with Warlow. She seems to like him but we know she doesn’t want to be turned into a vampire. Can’t see that ending well, but things never do for Sookie, really.