True Blood Recap: Death Is Not The End

Especially when you have friends left to feed on. 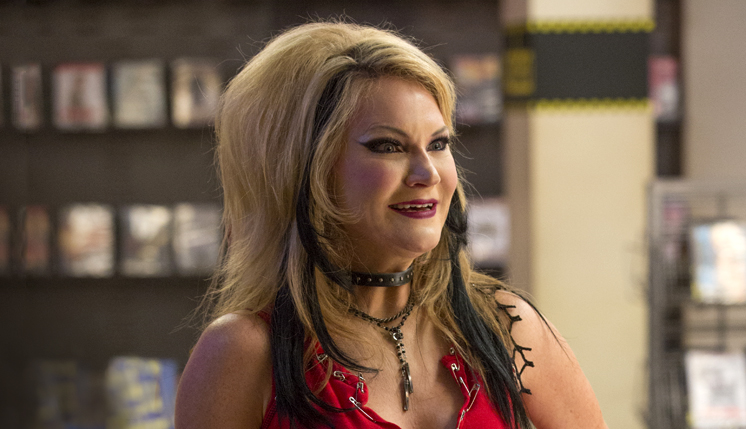 There was no sex on last night’s True Blood, unless you count whatever (or whomever) Jackson was up to in the start of the episode—which I don’t, simply out of respect for Alcide.

Yesterday’s episode opened with Sookie and Jason making phone calls to spread the word about Alcide and Maxine Fortenberry’s death. Alcide’s father tells Sookie his son “loved the fuck out of her,” and promises to be in Bon Temps soon. I couldn’t be less excited for Jackson’s arrival (werewolf family drama is consistently more boring than it should be), but on the bright side, the death of Big Max might mean the return of Bubba, and with him a little bit of my heart.

While the Stackhouses make difficult phone calls from inside the morgue, Eric is on a private jet with his fangs in a flight attendant’s thigh. He and Pam are heading to Baton Rouge in search of Sarah Newlin, but Eric redirects the plane to Shreveport to find Willa first. As far as baby vamps go, Willa is certainly the least compelling—I’m having trouble giving two fucks about her in the midst of important things like Tara dying, so I’m not surprised that she’s now nothing more than a plot device to justify Eric returning to Bon Temps. After alerting the flight attendant to their change in destination, Eric also warns her she’s now a carrier of Hep V. Charming. 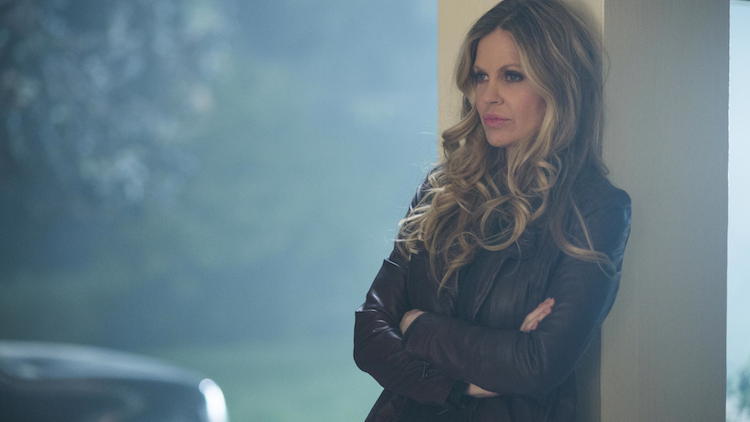 Before you can say “use protection, you jerk,” the episode flips into interminable flashback mode to reveal exactly why Pam harbors such a hatred for Shreveport. As punishment for disrespecting the Yakinomo corporation, Eric and Pam are ordered by the Authority to run a video store, complete with a porn-filled basement and secret Underground Railroad passageway. The Authority also appoints Eric as Sheriff because, you know, keep your friends close but put your enemies in charge of a stash of adult videos, I guess. With logic like that, it’s no wonder mainstreaming isn’t going smoothly.

Back in the dreary present day, Sookie, Sam, and Jason visit Holly and Andy (Sookie is wearing a new shirt, thank Billith. I couldn’t bear to see her wear Alcide’s blood anymore).  Sookie gives Arlene’s children an ill-advised heart-to-heart and promises to rescue their mother.  I expected this episode to tread into difficult emotional territory because of Alcide, but  it seems to be following a disappointing pattern I’ve been noticing throughout the season, where major characters’ deaths are strangely uneventful. Tara wasn’t mourned much because, as Lafayette pointed out, she had already died once, but Sookie seems unnaturally strong in the wake of her boyfriend’s murder. Everyone grieves differently and I respect that the people of Bon Temps don’t really have the luxury of mourning right now, but I simply didn’t believe Sookie’s behavior in the episode and especially this saccharine scene. I’d rather roll my eyes at a million Emma appearances than sit through more Sookie/sad kid bonding.

Andy is convinced to let Sookie speak with Holly, who is recuperating from her time in captivity but has no memory of what happened to her. Holly agrees to let Sookie help her remember what happened after the attack on Merlotte’s, and has a terrifying flashback to being held captive in Fangtasia. Sookie leaves for Bills after giving Andy advice on how to comfort his distraught kinda-girlfriend, and Sam and Jason drive off to inform Kevin’s widow of his death.

Understandably, Sam wants to detour to Fangtasia first to rescue Nicole. Jason pulls a gun on Mayor Sam and reminds him that any attempt to enter the bar would be a suicide mission without the help of vampires. The pair arrive at Kevin’s house and tell Rosie about her husband’s untimely death. I respect Sam’s commitment to his job, but it seems a poor strategic choice to show up at the home of someone who tried to shoot you not twelve hours ago–especially considering Jason then reveals the location of the Hep V den to Rosie. Smooth move, Stackhouse.

Back at Casa Bill, Jessica is writhing in pain from the unhealed bullet wound she received from Big Max in the last episode. James reveals that Jessica hasn’t fed in ten weeks.  Sookie arrives in time for the vampire domestic drama, and gives Jessica a refreshingly cynical speech about death that inspires the vamp to ask for Lafayette. 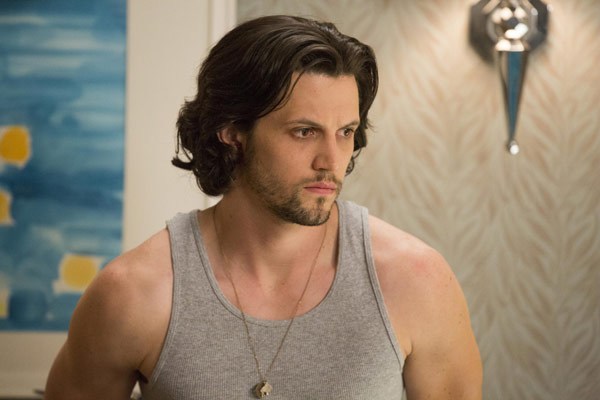 And suddenly, we’re in another flashback. It’s 1996 and Pam and Eric are lording over their podunk video rental store, where a customer (played by a commendably nerdy and sweet Tara Buck) is  captivated by the Eric and his very ’90s billowing shirt. HBO: I strongly suggest a spin-off show based entirely on the life of video store Eric. Something along the lines of Reality Bites, but with more undead Skarsgård. Get back to me.

Meanwhile, everyone is awake at House of Compton. Bill warns Sookie that the ranks of vampires willing to help out humans have diminished since the attack at Merlotte’s, but that he will of course assist her in storming Fangtasia because he “owes her everything.” Blech.  Sookie lets Bill feed on her so he’ll be strong for the fight, while upstairs James and Jessica are still arguing about Jess’ eating habits. 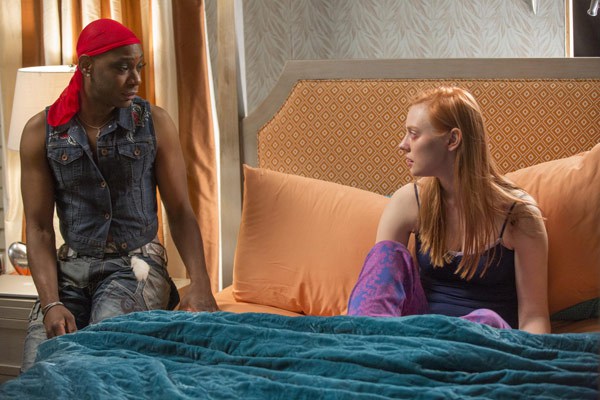 Don’t look now, it’s 2006 and we’re in a video store again. Ginger, who began working for Pam to get closer to Eric, has brought the Viking “a shitty chair.” Mainstreaming has already begun, as evidenced by a fridge full of True blood.  Ginger tells Pam that she should turn the video store into a night club capitalizing on her boss’ unattainability, because “Eric Northram is nothing if he is not pure, fucking sex on a throne.” Pam glamours Ginger into forgetting she came up with the idea, and Fangtasia, apparently, is born.

Back at Bill’s, a band of vamps and humans are gathered in preparation to storm the video store turned nightclub turned prison. Violet, Sam, Jessica, Sookie, and James are joined by Michael and Keith, two vampires from James’ band (LOL). Jason makes an ill-advised speech about Normandy, and Eric and Pam mercifully arrive at the house to make the evening a little more exciting. Eric reveals to the horrified group that he does have Hep V, but reassures them by saying it’s only Stage 1 and summons Willa to the little gathering as well.

Sookie and Eric take some time out for a heart to heart, because it’s not like anything important is happening right now. Sookie reveals that Alcide died earlier in the day, and Eric is typically sensitive about the news (not). The two are interrupted by an indignant Willa, who reams Eric out for abandoning her during vampire infancy. Eric explains that there’s an alternate way to enter Fangtasia, and the rescue squad carpools to Shreveport. 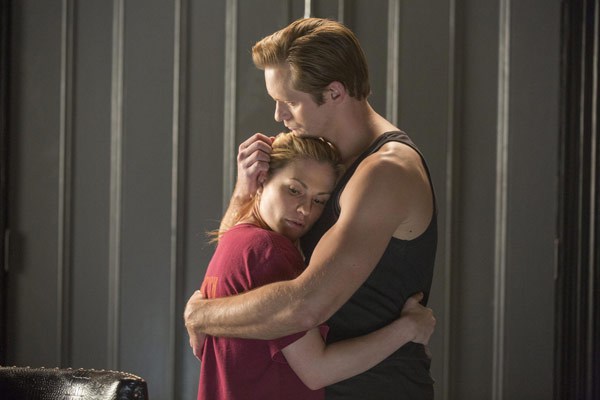 Once at Fangtasia, Sam shapeshifts into a mouse and arrives in the bar basement to alert the captives that help is on the way. One of the Hep V vamps arrives for Arlene, while Bill punches a hole in the wall and sneaks the group in through the underground passageway. Eric distracts the infected group by telling them he’s a sick Sheriff with a fairy for them all to feast on. Not surprisingly, Vince, Rosie, and the rest of the trigger-happy Bon Temps humans arrive for their revenge and shoot up the bar.

The healthy vamps and infected gang, all of which seem to have survived the gunfire surprisingly intact, meet in the street for a slow motion rumble. Sookie listens to her injured friend’s thoughts as Arlene has a vision of Terry. Sookie tells Arlene that the real Terry would want his wife to stay alive and take care of their kids. Arlene drinks Keith’s blood and Sookie overhears Terry telling Arlene he loves her and she should return to the land of the living. The Shreveport streets and the inside of Fangtasia are covered in splatters of dead vamp goo. A cello plays. Sookie and Eric share a meaningful look. Roll credits.

What did you guys think of last night’s episode? Frankly, I’m puzzled by it. In spite of being one of the stranger installments of this season (I don’t know what to make of the obvious afterlife revealed by Terry), I was still flat-out bored. I didn’t believe Sookie’s stoicism or her sudden coziness with Eric, and the attack on Fangtasia didn’t feel earned to me yet—maybe if the season had been built around rescuing the captives, there would have been more tension.

Regardless, it will be interesting to see who takes on the mantle of “big baddie” for the rest of this show’s brief lifetime. Whoever fills the shoes of the Fangtasia gang, they better not mess with the return of Hoyt—perhaps Big Bubba can help this show end its days with some of its original integrity intact.