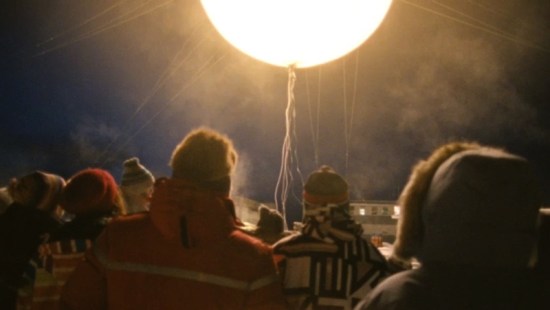 Inuvik is one of the most northerly towns in Canada, and as such, it’s subject to great variations in sunlight throughout the year. According to Wikipedia, “Due to its northern location, Inuvik experiences an average of 56 days of continuous sunlight every summer and 30 days of polar night every winter.” Also: temperatures approach -40 degrees Celsius (which happens to convert to -40 degrees Fahrenheit).

This not only makes Inuvik a prime target for hibernal vampires, but it also makes for rather gloomy winters. In a cool promotion for its “Brighter Mornings” campaign and its new juice line, Tropicana Essentials with added vitamin D and calcium, Tropicana went into Inuvik for a month with a 36-foot-wide, 100,000 lumen artificial sun.

…A team of Canadian filmmakers captured the raising of the ‘sun’ in Inuvik for a series of documentary-style commercials.

The lights were affixed to a 36-foot wide helium balloon which then rose and illuminated the town. The Tropicana Brand’s ‘sunrise’ coincided with Inuvik’s annual Sunrise Festival, which celebrates the return of sunlight after weeks of relative darkness.

The brand also provided 1,200 free cartons of Tropicana Pure Premium Orange Juice – one for every household in the community.

Tropicana’s Facebook page has more info on the campaign. Below, a sniplet of their footage: