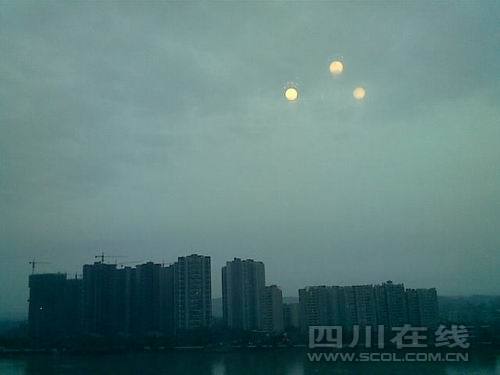 On July 26th, the Chinese city of Leshan witnessed a phenomenon that’s puzzling experts and led one Chinese paper to ask this morning if it was a UFO: What appeared to be three suns in the sky at once. Assuming this didn’t come from a close encounter of the third kind or a three wolf moon passing through a double rainbow, what could it have been?

The main explanation put forth by scientists is that the triple sun was the product of a ‘sun dog’ or parhelion, which Danwei describes as a “halo around the sun caused by refraction of sunlight through atmospheric ice crystals, often looks like three suns hanging in the sky.” But here’s the thing: Parhelia usually cause all of the suns to appear next to each other on one straight line; the triple sun formed a triangle. Thus, Chinese astronomers aren’t quite sure how to explain it.

Our armchair guess: Leshan is a region notorious for its pollution caused by unbridled urban growth, so much so that the famous Leshan Giant Buddha, more than a millenium old is getting covered in dirt and soot. That much junk in the sky could play many more tricks on our eyes than a few measly ice crystals.