Why doesn't anyone understand how PTSD works? 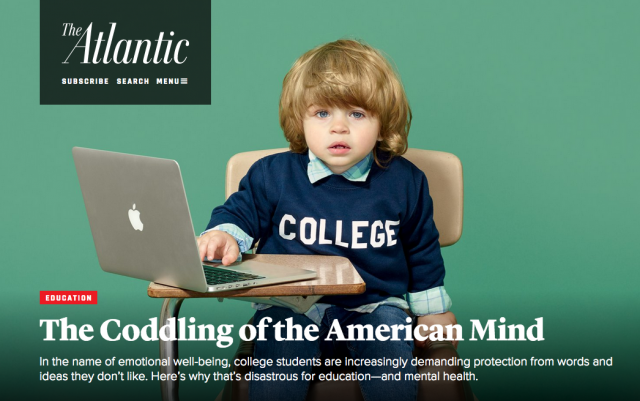 You’ve basically read this anti-trigger warning article before. You probably didn’t even see the far-less-popular follow-up, “I was a liberal adjunct professor. My liberal students didn’t scare me at all.” The stories people share about trigger warnings tend to wildly misunderstand the issue; this latest one literally depicts modern college students as babies.

The Atlantic‘s piece makes some reference to work done by mental health professionals and the idea that perhaps trigger warnings don’t much help people who have PTSD, which is an argument I’ve heard before. However, the piece uses the idea of “exposure therapy” as a justification for why trigger warnings can harm students:

Students with PTSD should of course get treatment, but they should not try to avoid normal life … A discussion of violence is unlikely to be followed by actual violence, so it is a good way to help students change the associations that are causing them discomfort. And they’d better get their habituation done in college, because the world beyond college will be far less willing to accommodate requests for trigger warnings and opt-outs.

This assertion that classroom discussions are a “good way to help students” lacks a citation. Although “exposure therapy” worked for me, personally, that’s probably because a mental health professional was involved.

This article does very little to explore how educators might better serve PTSD sufferers; instead, the piece seems to assert that educators shouldn’t have to change a thing. Also, the title, photo, and overall framing of the piece emphasizes the myth of the oversensitive, trophy-hoarding millennial who just wants to get out of doing their homework. This assumption supposes that young college students are using their “fragile” natures as an excuse to not engage with “words and ideas they don’t like” (e.g. “students seem to be reporting more emotional crises; many seem fragile”).

And as for the words they “don’t like”? Let’s see:

The recent collegiate trend of uncovering allegedly racist, sexist, classist, or otherwise discriminatory microaggressions doesn’t incidentally teach students to focus on small or accidental slights. Its purpose is to get students to focus on them and then relabel the people who have made such remarks as aggressors.

Speaking as a millennial who got trophies for nothing (and I could tell I hadn’t “earned” them, by the way — we all could tell, and so we internalized worthlessness, not “specialness”), worked an unpaid internship for years in addition to being a full-time student and also working a paying part-time job, and had an abusive relationship that resulted in mild PTSD and anxiety, I guess you could say I’m an expert on bad millennial stereotypes. And this article is far from the first one I’ve seen to lean on these tropes. This is just one in a long line of misunderstandings on the part of older college professors who actually just seem angry at the “political correctness” their modern students have begun to demand. They may try to characterize us as literal babies, but they’re the ones who look like babies to me, given the refusal to acknowledge their students’ experiences. They can’t be bothered to make small changes to their own curriculums that might better facilitate conversations among their students about media depictions of violence, rape, assault, war, kidnapping, and so on.

I like the idea of trigger warnings, but I’ll be the first to admit that I’m not sure they do much to protect people from panic attacks. Unfortunately, almost no articles that discuss trigger warnings seem particularly interested in centering the experiences of people with anxiety and PTSD, and how those people might be better served by institutions and classes that they’re paying thousands and thousands of dollars to attend. Ahem. Anyway.

A trigger warning doesn’t necessarily stop me from engaging with content, but it does help me prepare for what I might endure. In my experience, though, it’s almost impossible for me to predict what will trigger a panic attack in me. That doesn’t mean I think trigger warnings are useless; I understand the purpose they’re meant to serve, even though they don’t always work. I think trigger warnings have arisen in response to the uncontrolled, fire-hose nature of the internet; young people use them as a way to cope with how little control we have over the way content has changed in the age of modern technology.

I don’t have evidence to back up my claims about how these warnings work, unfortunately, but I do have a lot of anecdotal stories from friends about how they have trouble predicting what will “set off” their anxiety, as well. What’s more, the treatment of anxiety and PTSD focuses on allowing people who suffer from these conditions to continue to enjoy and interact with media in spite of triggers. If your therapist tells you to just stop watching TV entirely, uh, get a new therapist because the best ones I’ve had have been the ones who’ve encouraged me to gain the tools to navigate even the hardest aspects of my daily life. The end goal of treatment, in my experience, is to be able to continue interacting with potential triggers without having a panic attack.

I don’t actually think these articles tend to be about PTSD sufferers at all, though. I think they are about silencing discussions of how media tends to depict violence and rape, and refusing to acknowledge how and why modern students are “offended” by many of these depictions. To me, the entire point of a good arts studies course would be to discuss how these representations tend to be framed, and to highlight whether or not those depictions are exploitative, or even sexist, racist, and transphobic. Millennials are not afraid of these conversations. Quite the opposite, in my experience. The reason why trigger warnings and content warnings have become a mainstay in progressive blogging spaces is because young people have finally begun to acknowledge how many of us have dealt with trauma and violence, and have craved places to discuss how our stories get depicted in media.

I’ll end this piece by highlighting an example of a college professor I had who did this right. Long before I knew about feminism or trigger warnings at all, I read the novel McTeague for a college course. In the run-up to the book, our professor told us that it would feature some implied sexual violence. In other words, she told us we might be a bit creeped out. She was right; it’s a pretty gross book. But we were prepared well ahead of time, and we came to class ready to discuss how the book navigated these topics.

If I had gone to my professor with a doctor’s note and explained that I couldn’t read the book, I’m not sure what would have happened. I’d like to think she wouldn’t have been a jerk about it, and that my condition would have been respected as much as any other time that I got sick over the course of my academic career. PTSD and anxiety are real, and they can be treated, and the end goal of treatment is … yup … allowing a student to go back to doing their homework. But, again, I don’t think that’s what this article was ever really about.

I wish that articles about trigger warnings would stop throwing anxiety and PTSD sufferers under the bus as a veiled excuse to mock students’ political correctness. If professors think trigger warnings are for “fragile” babies, then I’d hate to see how they navigate topics like sexism and racism in their classrooms. You’d think they’d want to be sure they were discussing these difficult topics in a way that didn’t alienate their most marginalized students. Even students who don’t suffer from anxiety or PTSD could benefit from a more respectful approach to tough topics, especially given how many students have had to navigate oppressive systems for their entire lives.

The fact that millennials have begun to call out institutions for their backwards ways makes me feel proud. Any attempt to frame these young students as afraid, oversensitive, and irresponsible should be seen for what it is: old institutions unwilling to accommodate the diverse experiences of their students.

(via The Atlantic, image via screenshot)