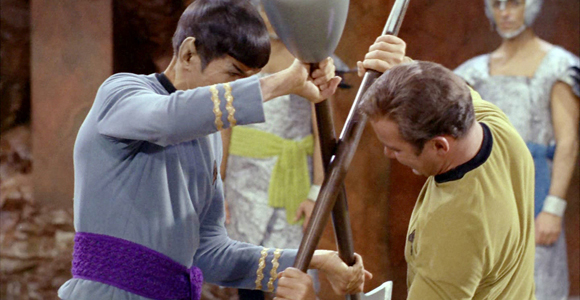 Over what infraction did one man ask a court for trial by combat? Click ahead to find out!

“A minor motoring offense” according to The Telegraph. Back in 2002 (pardon us, we just heard about this story and couldn’t resist sharing), 60-year-old Leon Humphreys decided instead of paying a $40 fine, he’d ask for trial by combat. He claims he was ready to fight the chosen champion of their motor vehicle department. Methinks someone was reading too much A Song of Ice and Fire.

“Leon Humphreys remained adamant yesterday that his right to fight a champion nominated by the Driver and Vehicle Licensing Agency (DVLA) was still valid under European human rights legislation. He said it would have been a ‘reasonable’ way to settle the matter,” writes Telegraph. Yes…reasonable. “Humphreys, an unemployed mechanic, was taken to court after refusing to pay the original £25 fixed penalty for failing to notify the DVLA that his Suzuki motorcycle was off the road.”

He went so far as to inform the court just how he would fight their champion, with “samurai swords, Ghurka knives or heavy hammers.”

According to the wikipedia page on trial by combat, it’s been retired for a while: “Wager of battle, as the trial by combat was called in English, appears to have been introduced into the common law of the Kingdom of England following the Norman conquest and remained in use for the duration of the High and Late Middle Ages. The last certain trial by battle in England occurred in 1446: a servant accused his master of treason, and the master drank too much wine before the battle and was slain by the servant.”

Did we also mention Humphreys intended this to be a fight to the death? He was denied and was fined £200 with an additional £100 in court costs.