November 30th of every year should heretofore be known as Saint Trevor Noah’s Day, if only because he managed to keep it together while interviewing Tomi Lahren on The Daily Show last night.

On last night’s The Daily Show with Trevor Noah, Noah had on as a guest conservative commentator, Tomi Lahren, whom I’d never heard of until today, but apparently has a channel on The Blaze TV, a digital streaming subscription service that caters to a right-wing audience. When I saw that this person was to be interviewed on The Daily Show, I thought Hmm. This should be interesting. I’d be curious to see what this young, female, conservative political commentator has to say about all this Trump business. Because even knowing that we’d disagree, I still get excited when I see women, particularly young women who bring with them new energy, vitality, and hopefully ideas, on either side of the aisle making their voices heard.

I just wish that Tomi Lahren were someone I could respect.

Watch the video above, and you’ll see the myriad moments in which she’ll say something, only to contradict herself moments later. The way she’ll deflect a question by refusing to get off one point. The way she says “I don’t like labels,” followed almost immediately by, “I’m a Millennial, Trevor.” (Even Noah has a hard time not LOL-ing directly into her face on that one.)

There are so many ways in which this woman’s ignorance slip is showing, but I’m thankful that I don’t have to write about most them here, because Noah does such an amazing job holding her accountable for the things she says. As Pajiba noted, “He’s not as good as Jon Stewart was at the daily rundown, and he may never be, but he’s a better interviewer (Jon Stewart, God bless, pulled punches, and even when he was going after someone, often turned it into a joke. He was rarely very hard on an interviewee).” 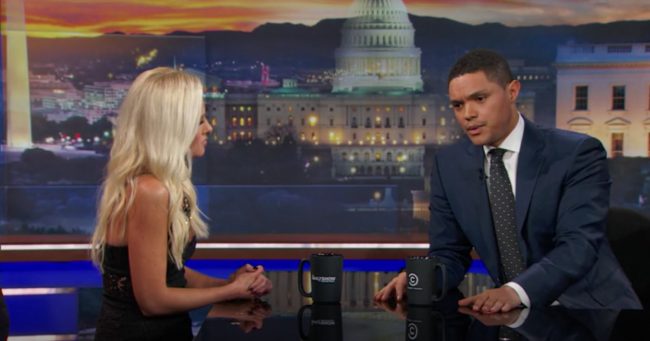 Meanwhile, Noah went after her without deteriorating into a hateful horror show, which takes huge amounts of patience. So thank you, Trevor Noah, for that.

The one point I did want to comment on is the point in the interview around 21:15, where she tries to relate other protesters to herself “as a woman.” With regard to football player Colin Kirkpatrick and his taking a knee during the national anthem in protest of how black people are treated in the United States, the conversation between Lahren and Noah goes like this:

Lahren: “For me, I think there are a lot of folks in this country — I, being a woman, um, I didn’t have rights [until] after black people, until women got the right to vote. But because I feel like I’m a woman and I’m marginalized in some way, I don’t protest my country. I don’t see what he’s protesting. I would like to know exactly what he is protesting.

So, what she’s saying is, she believes that women are indeed marginalized “in some way” in this country (and I’d love to have a conversation with her about exactly what those ways are, because I’m sure they’d be quite different from my list), but that she doesn’t protest how women are treated, because she chooses not to make herself a victim.

Meanwhile, I want whatever pill, tonic, or elixir that Noah took to remain calm throughout this entire interview.