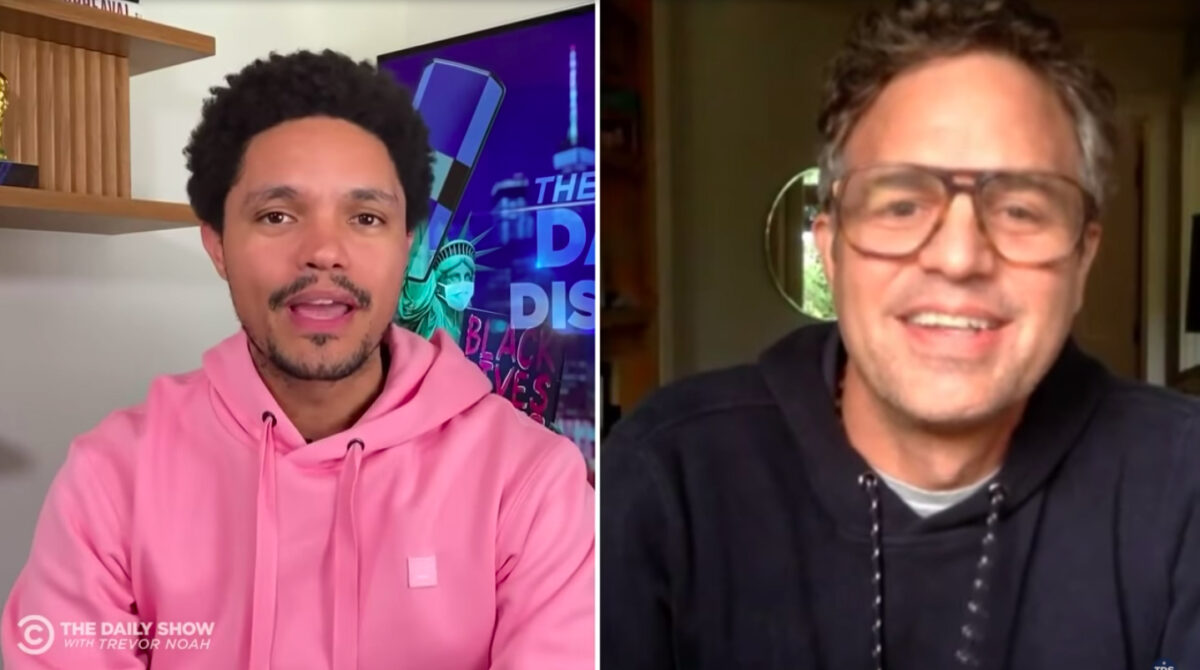 Trevor Noah and Mark Ruffalo clearly miss hugs, but they also had an incredible interview together for The Daily Show where Noah asked Ruffalo about his hometown of Kenosha, Wisconsin, and his support of the Black Lives Matter movement.

“Or being around people who don’t have masks on and not wanting to hit them or like berate them or ask them like ‘What the f**k is your problem? What’s the big deal, man?'” Ruffalo said, and honestly, I said, “Wow, a mood” out loud. Are all the Avengers just seething in their homes about people not wearing masks? Give me THAT video.

But Noah went on to point out that Mark Ruffalo has never really been quiet about his views. It’s one of the reasons I like him so much (outside of the fact that he’s a very good actor). He often picks projects with a story and a message and uses that to talk about the importance he found in that.

His Twitter account is filled with his political views and speaking out, and he’s just always kind of been an actor who doesn’t shy away from his beliefs. Talking with Noah, he brought up the ridiculousness of people who say “all lives matter” in response to “Black lives matter.”

“I feel bad for anyone who doesn’t join us, especially for the people who say ‘All Lives Matter’ because if you truly believe that ‘All Lives Matter’ then you should be on the streets right now with your Black and brown and white brothers who are all fighting for one of the races where obviously it doesn’t appear like they are being considered the same was as the rest of us, alright?”

Ruffalo is clearly frustrated with how the media is taking on these protests, as well. Right after his comments on the people who claim “All Lives Matter,” he began talking about how the protests are predominately peaceful, but they’re not being depicted that way in the media. He also brought up the people coming from out of town and tearing apart towns. (He specifically mentioned his hometown of Kenosha and how it broke his heart). His problem wasn’t necessarily the violence but more that the news coming out of Kenosha didn’t feel honest, and he pointed out that he understands that Kenosha has a history of racial injustices that needs to be addressed.

The reason this interview is so important, to me at least, is that it’s Ruffalo using his platform as a famous white actor to talk about these issues and force his white fans to listen to him. There is a lot of “that’s not my place” happening with white celebrities, and that’s not helpful. Celebrities like Ruffalo using their platform to try to bring awareness to the BLM movement helps because there is, sadly, a culture where fans will do what their faves ask of them, and with Ruffalo, he’s asking his base (by using his platform in this way) to stay informed, and I respect that.

Ruffalo couldn’t go to the protest in Kenosha because he’s quarantined and taking care of his family in the midst of the pandemic, so he hosted an Instagram Live with the Kenosha BLM organizers to help do his part.

And what I loved about the end of this interview was Mark Ruffalo talking about the upcoming election. A very vocal Democrat and supporter of Bernie Sanders, Ruffalo pointed out that the mistakes of 2016 cannot be repeated in 2020, and we do have to rally behind Joe Biden. That doesn’t mean we don’t hold him and the Democrats accountable, but we cannot let four more years of Trump happen.

I’m proud to be a fan of Mark Ruffalo and proud, as Trevor Noah said, that he continues to have that fire for what is just and right in this world.