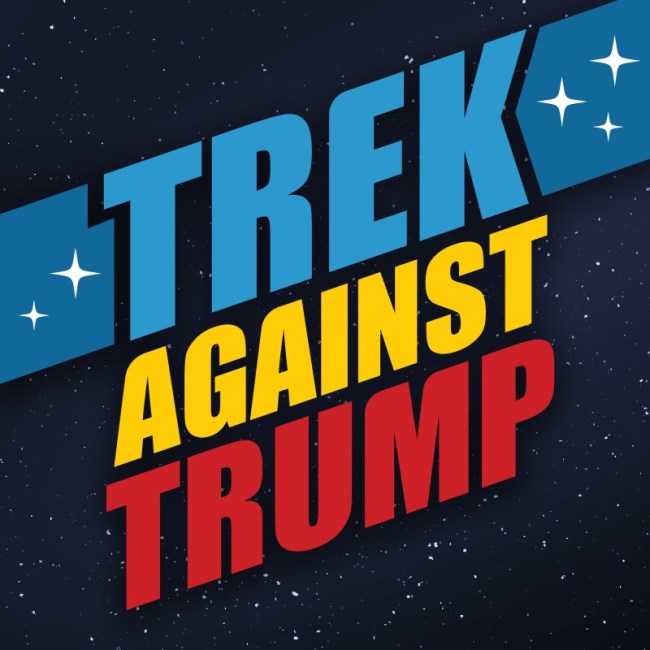 A few days ago, an account appeared on Facebook and Twitter called Trek Against Trump. Their goal? To get out the vote for Hillary Clinton, because if one believes in the optimistic, inclusive world of Star Trek, a vote for a man who is vocally racist, sexist, and who thinks himself smarter than other people simply because he’s managed to stay rich by not paying taxes doesn’t make sense. You’d think.

Over 100 members of the Star Trek family — from across all the series and films, as well as family members of the deceased — came together to endorse the Trek Against Trump effort, with more seemingly adding themselves all the time. They hope to inspire Trek fans to recognize that Trump is completely antithetical to what Trek stands for, encourage them to vote and, what’s more, to make a conscious vote for Clinton, rather than a third party candidate. Here is their statement in full:

Star Trek has always offered a positive vision of the future, a vision of hope and optimism, and most importantly, a vision of inclusion, where people of all races are accorded equal respect and dignity, where individual beliefs and lifestyles are respected so long as they pose no threat to others. We cannot turn our backs on what is happening in the upcoming election. Never has there been a presidential candidate who stands in such complete opposition to the ideals of the Star Trek universe as Donald Trump. His election would take this country backward, perhaps disastrously. We need to elect a president who will move this country forward into the kind of future we all dream of: where personal differences are understood and accepted, where science overrules superstition, where people work together instead of against each other.

The resolution of conflicts on Star Trek was never easy. Don’t remain aloof –vote! We have heard people say they will vote Green or Libertarian or not at all because the two major candidates are equally flawed. That is both illogical and inaccurate. Either Secretary Clinton or Mr. Trump will occupy the White House. One is an amateur with a contemptuous ignorance of national laws and international realities, while the other has devoted her life to public service, and has deep and valuable experience with the proven ability to work with Congress to pass desperately needed legislation. If, as some say, the government is broken, a protest vote will not fix it.

Have you just turned 18? Have you moved? Have you never voted before? Some states have early registration (early October) and/or absentee ballots. You can’t vote if you are not registered. So make it so. Go to https://www.rockthevote.com , a non-profit, non-partisan organization, and fulfill your civic duty. Because, damn it, you are a citizen of the USA, with an obligation to take part in our democracy! Do this not merely for yourself but for all the generations that follow. Vote for a future of enlightenment and inclusion, a future that will someday lead us to the stars.

But you didn’t think that something like this would be universally accepted, did you? Of course not. The comment sections over at the Facebook page have gotten heated, as conservative Trek fans, ahem, express their displeasure with the Star Trek family for, as one commenter put it, “alienating half their fan base.” And, of course, you got the same old tired comments about how some wish that Hollywood types would stop expressing political opinions.

Of course, if a conservative Hollywood type expresses their political opinion, their freedom of speech must be protected at all times!

I, for one, am thrilled that so many people whose work I love and respect are coming together in the name of a franchise that has been a part of me since childhood to elect a person who will ensure that the country stays safe for people like me: female, Latina, LGBTQIA, non-wealthy. 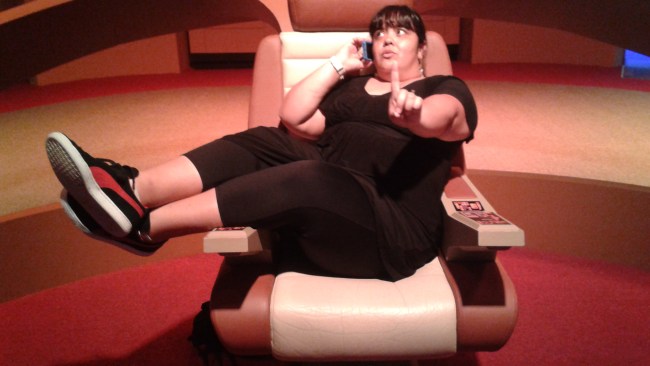 “I don’t have time to deal with the Romulans right now. I’m getting out the vote for HIllary.”

Trump has not proven that he cares about any of these things. In fact, he’s been actively misogynistic, racist, harmful to the LGBTQIA community, and vocal about his superiority complex because he’s rich. A vote for Trump is a vote against people like me. It’s a vote in favor of considering me a second-class citizen at all my intersections. The thought that there are people in this world who would support a man like that genuinely frightens me.

But I’ve never been more proud to be a Star Trek fan than I am right now.

(images via the Trek Against Trump Facebook page and Yours Truly)