Steve Mnuchin Got Owned on Twitter by ... Axl Rose?! | The Mary Sue 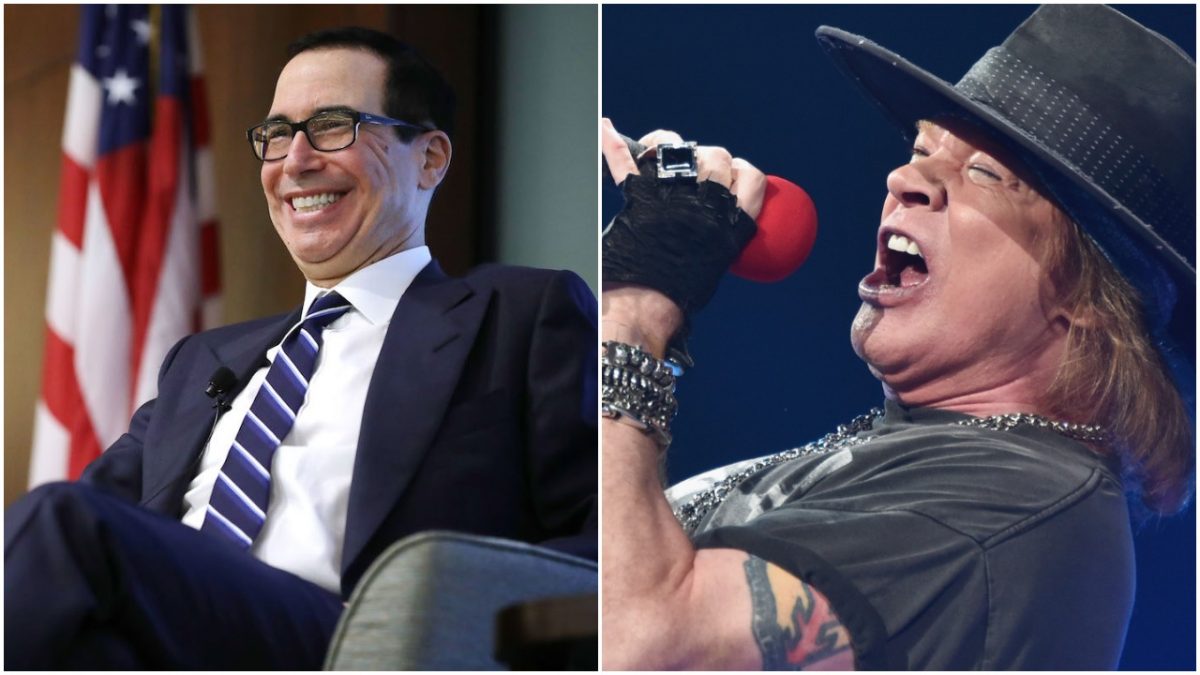 Welcome to the Jungle, Steven Mnuchin. The Treasury Secretary got into a Twitter fight with the lead singer of Guns N’ Roses and managed to only make himself look worse, which is saying something for the guy who referred to stimulus checks as “bridge liquidity” for struggling Americans.

Some background. Mnuchin was recently in the news for encouraging Americans to get out, travel the country, and enjoy the open road during this lovely global pandemic we’re all suffering through. Because of course everyone has time on their hands right now, why not directly flout CDC guidelines and hit the road!

It was in this context that Axl Rose appeared to bless Twitter with his wisdom by stating what we all were thinking:

It’s official! Whatever anyone may have previously thought of Steve Mnuchin he’s officially an asshole.

Mnuchin however, couldn’t stand being called out by the rock legend and so he responded petulantly and manage to end his tweet with the flag of … Liberia.

He quickly deleted the tweet with the wrong flag and then tweeted AGAIN with the right one. But oh, the internet remembers.

Now, to give Mnuchin the benefit of the doubt here, the flags of Liberia and the US do look alike. But his error and his general horribleness were not something anyone was going to let go. Certainly not Mr. Rose, who replied to his corrected tweet with a pretty cutting response.

My bad I didn’t get we’re hoping 2 emulate Liberia’s economic model but on the real unlike this admin I’m not responsible for 70k+ deaths n’ unlike u I don’t hold a fed gov position of responsibility 2 the American people n’ go on TV tellin them 2 travel the US during a pandemic.

Everything about this is great. Not only did Mnuchin show that, like his boss, he’s a petty, vindictive rube who should not be allowed on social media, but he also allowed himself to be called out in a public forum for his irresponsible rhetoric. In a sentence that seems to summarize the bizarre universe that we’ve found ourselves in, Axl Rose made several excellent points in his reply to the Treasury Secretary.

Axl Rose has, in the past, complained about the Trump administration using “loopholes” to utilize Guns N’Roses songs without their consent, and said that Trump has “no regard for truth, ethics, morals or empathy of any kind.” And this isn’t even the first big political kerfuffle involving GNR this week, after Trump appeared at a mask-making factory sans mask while the band’s hit “Live and Let Die” piped in the background.

This is just another entry in the chronicles of “2020 is the darkest and weirdest timeline,” to be updated daily.