Why Transparent Has Lost The Trust Of The Trans Community 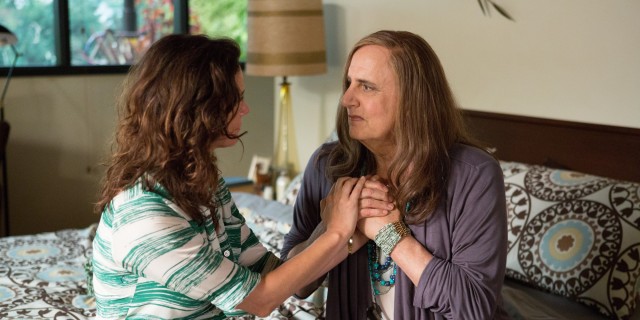 I’ve written about the issues I have with Transparent before, but buckle in – we’re going to take another spin. I was one of the people on Twitter that was not happy with all the mainstream media attention the show received, especially after the Golden Globes. The speeches were good, and the show genuinely does have it’s heart in the right place, as does the main lead. But public opinion on Transparent is split: to cisgender people, it’s a positive accurate portrayal of the “trans experience”; to transgender people, it’s a lot less accurate and positive.

I can’t say that all transgender folk do not enjoy Transparent; that would be incorrect, and a disservice to the individuality of trans people. Everyone who identifies as trans is can have a different opinion on a TV show, because we’re all individuals. Trans people (like all people) don’t unanimously agree on what’s positive, problematic, or many other things. Good. That’s how it should be! We’re trans, not the Borg.

Though I wouldn’t say no to Borg firepower sometimes.

As evidence by the twisted and tangled Twitterverse and the many online articles, it’s clear to me that trans opinion is far more against Transparent than for it. I avoided the show from the start because I just knew that emotionally I couldn’t deal with watching it – I had no trust left to give. Mainstream media has a long history of transgender abuse. It didn’t help that Transparent started out on a sour note with trans people, as the show cast a cisgender male actor to play a trans woman – a classic erasure. Despite that, I’ve kept an eye on Transparent and trans opinions regarding the show, because I was hoping that my cynicism this time would be misplaced. I adopted a wait-and-see approach.

It seems that this the right move, because the show has issues. First of all, Transparent is written by cisgender writers. “Yes but,” I hear people say, “Jill Soloway has a trans parent!” This is trotted out as though it somehow means that Jill understands exactly what it is like to be transgender in today’s highly transphobic society. Sure, her experience will provide her with more understanding than most cis people, but it’s still second-hand experience. It’s just not the same as lived experience; hearing things second-hand is nothing like living through them. The pain is not as raw, the emotions are one step removed, and the impact is from a distance.

It’s hard to win trust in the trans community, and shockingly easy to lose. Trust can vanish like love spurned, in an instant, with no hope of winning it back. Missteps in season one have thus lost Transparent quite a bit of trust from the trans community. The awful representation of Ian Harvie, the shows only trans man, failed to win back confidence that the show really understood trans issues. It got worse when it became clear during the season that the show is not actually about Maura coming out; that’s just the plot engine.

What Transparent is truly about is how cisgender people cope with something they don’t want to be happening – that they can’t stop from happening; and, more fundamentally, that it’s happening to someone they can’t easily be rid of. The focus is on cisgender people being afraid of losing their privilege. It hasn’t focused on trans representation, it’s focused on cis people being afraid of having someone close to them come out as transgender. To me, this is why Transparent has lost so much trust, and why so many trans people are questioning how much cisgender applause the show is getting.

“Well, okay,” people say to me, “but for season two they’re going to have a trans consultant on the show to help with the writing!” This is true, they do! But, tragically, they made a mess of this, and lost more trust in the process. Though it sounded great when it was first announced – “Jill Soloway wants to nurture a female transgender writer!” – the Transparent staff actually selected a famous trans musician, Our Lady J, to be their consultant. The problem here is that, if you’re trans and famous, your life experience is going to be very different from 99.9% of other transgender people. I question how the real experience of trans folk will be reflected with a trans celebrity consulting.

For many people, any hope of trust in the show being regained was lost when Jill Soloway publically posted a derogatory photo on her Facebook page of Bruce Jenner. It was a picture that I will not repost or describe in detail, as I don’t think it’s fair to keep spreading it – let’s be clear here, Bruce Jenner should not be called transgender until Bruce himself declares that he’s trans. That hasn’t happened, so his personal identity should not be up for media speculation. Suffice to say, the picture Jill posted was mocking both Bruce Jenner and transgender women, and it was a cheap and ghastly gag.

The trans community on Twitter is, in part, lamenting the betrayal, yelling “I told you this would happen!” Yet again, trans people – and trans women in particular – are shown as just a punchline. We’re the funny turn, and our very existence is mocked as humorous. This all hurt a great deal more considering it came from Jill, whom parts of the trans community did trust, believing that she understood the struggles faced by trans people. For me, it demonstrated that cis people perhaps can’t fully understand transgender people, and re-inforced just how important it is for cis people to listen to trans people before attempting to represent trans topics.

If Jill had listened and genuinely understood the trans community, this wouldn’t have happened. Transparent has made so many mistakes that it’s clear they are not deserving of the plaudits and awards they’ve received, and they are certainly not deserving of trust from the trans community. Now is the time for cisgender people to also hold this show up to a higher standard than it’s currently achieving. I don’t want Transparent to die – I just want it to be better.