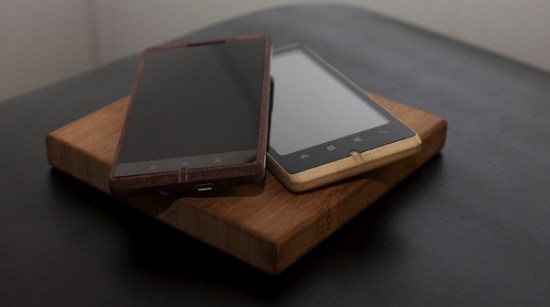 If you like to be on the bleeding edge of sustainability and style, there’s a new mobile phone on the horizon that you might want to know about, a mobile phone that’s made of bamboo. OK, so it still has a screen and like, electronic gizzards –it’s not from Gilligan’s Island or anything– but the casing is made entirely from a single piece of bamboo, grown and cut in such a way as to rival most plastics in strength and durability.

The bamboo phone is the brainchild of Kieron-Scott Woodhouse, a British student in his fourth year at Middlesex University. Woodhouse started with a few concept designs that were quickly found by the phone industry’s powers-that-be. Soon thereafter, Woohouse was approached to help develop the real thing.

When it’s finally ready, the phone is going to run Google’s Android operating system and will boast all the features that an Android phones typically possess. In fact, it’s got some especially high tech ones including a “flash ring” for the camera, which may actually make the bamboo phone’s camera one of the best ones out there.

The phone is to be released in China and the UK soon, but other details are hard to come by at the moment. The aim is to market the phone to a “boutique” sort of crowd, so don’t expect all phones to start being made out of bamboo any time soon. That being said, because of its fast growth and hearty nature, bamboo is a pretty good material for this kind of stuff, which is why you’ve probably seen it being used for keyboards or mice, arguably also marketed towards a boutique sort of crowd. Still, if these ever make it to the States, I’d love to check one out. Not sure I’d want one but it does seem like a neat idea, unless you like, leaf it somewhere where there are termites or something; that wooden be good at all.