Maybe this world is another planet's hell. 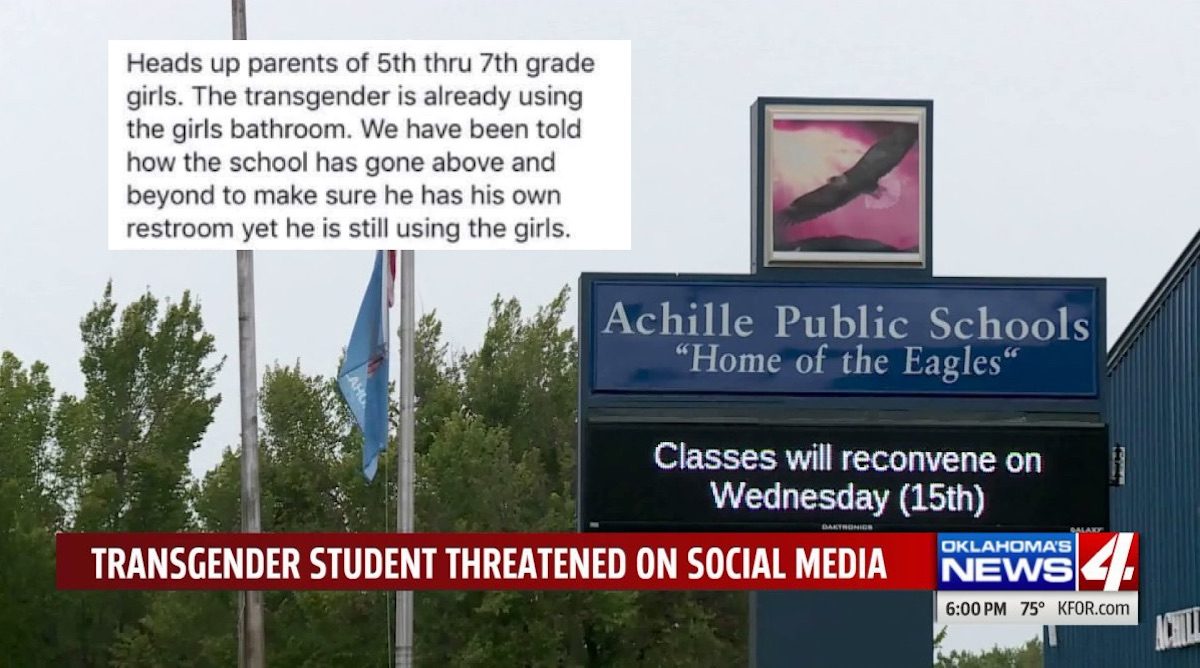 Maddie is 12 years old, and on her first day of 7th grade, she used the girls’ bathroom at her public school in Achille, Oklahoma. Then the parents from her school showed themselves to be subhuman pieces of toxic garbage.

Maddie usually uses one of the faculty restrooms. But on Aug. 8, her first day in seventh grade, she used the girls’ bathroom because she was in a new building and didn’t yet know where the faculty bathrooms were.

“She’s been living as female for years—she started at Achille as Maddie,” Rose said, according to Oklahoma News 4. “We had no problems when we first started.”

Then a mother named Jamie Crenshaw wrote a fear-mongering post on a Facebook private group for parents at Maddie’s school:

“The transgender is already using the girls bathroom,” Crenshaw wrote last week. “We have been told how the school has gone above and beyond to make sure he has his own restroom yet he is still using the girls. REALLY…. Looks like it’s gonna be a long year.”

Crenshaw’s cruel pearl-clutching unfortunately did not end with her choking on her own pearls. Instead of being reprimanded or corrected, parents in the Achille group started piling onto Crenshaw’s comment with violent threats against Maddie, who is a child.

“This is terrible!! Y’all have great kids and a lil half baked maggot is causing them probs. We feel 4 y’all,” wrote one man.

Another father suggested attacking Maddie, who is a child, with a knife. “If he wants to be a female make him a female. A good sharp knife will do the job really quick.”

Yet another man also thought violence toward a child should be encouraged. He referred to Maddie, who is a child, as “it.” “Just tell the kids to kick ass in the bathroom and it won’t want to come back!!” To which another man thought the Crenshaws’ son should commit these acts of violence:

One man, whose profile picture showed a family, wrote: “Let Parker whip his ass until he quits coming to school.” People reacted to the post 16 times with the like button and the laughing emoji.

It’s hard to address what happened, because every time I look at these comments there’s a sound of screaming in my brain, and I wonder if humanity just needs to be canceled. We’re done here, let’s reboot the planet and bring back the dinosaurs.

Maddie’s mother went on to obtain an order of protection against Burney Crenshaw, Jamie Crenshaw’s husband, who was a ringleader of the online bullies and has apparently instigated incidents with Maddie’s parents. The Crenshaws sound like a delightful family. I hope they get run out of town and that every single “adult” who contributed to the Facebook thread about Maddie sees offline repercussions for it.

Ms. Rose obtained an order of protection against Mr. Crenshaw after she said he blocked her in the road on Friday morning and “verbally assaulted” her about Maddie, shortly after they dropped their children off at school. Earlier this year, she said, Mr. Crenshaw confronted Ms. Rose’s husband at a father-daughter dance that he had attended with Maddie.

Beyond her supportive parents, the hero of this story is Maddie, though she is understandably traumatized by the threats and language used against her. Per the Times:

Maddie said that she was now afraid to sleep alone at night — but that even though she’s scared, she wants to stay in public school.

“I’m going to keep my head held up high and stay strong and go to school,” she said in an interview on Tuesday. “And won’t let those bullies drag me down.”

Maddie, a child, is displaying grace, fortitude, wisdom and bravery in the face of this terrible situation. But the fact that a 12-year-old is afraid to sleep alone at night because of the parents of her classmates is heartbreaking and deeply disturbing. What happened with Maddie seems to be an encapsulation of so many things that are wrong with America, and it’s also demonstrative of why fighting for equal rights and protections under the law is so vitally and pressingly important.

In response to the widespread reports of the threats against Maddie, the school district shut down all public schools for two days, “to protect children in the event of big protests.” There’s some indication that the Achille schools are now doing what they can to address the sort of bullying Maddie faced—but what can be done about the fact that the nastiest, most hateful vitriol emerged from the parents of her peers? And in the age of Trump, how do we move forward to better protect children and people of every age?

Oklahoma is a state that does not recognize hate crimes based on gender identity or sexual orientation, nor does it offer discrimination protection along these lines.

In Oklahoma, “all transgender people are invisible to the law,” said Paula S. Schonauer, a retired police officer and longtime activist on behalf of transgender people in the state. Transgender students depend on the individual policies of school districts to address their needs.

It should not be up to the individual policies of school districts to address the needs of transgender students. Because Donald Trump was elected president, measures intended to protect transgender students on the issue of bathrooms have been removed.

Protections for transgender students that had allowed them to use bathrooms corresponding with their gender identity were rescinded by the Trump administration last year.

Your vote matters in so many ways that have so many ramifications for others.

A GoFundMe has been set up by supporters of Maddie’s family with the intent to help them move elsewhere. You can donate to it here.

Now if you will pardon me, I have to keep screaming. I know I’m not the only one.

while cis white men on fox news bullshit about #transgenderprivilege, ADULTS are threatening violence against trans children for fucking existing. excuse me while i scream https://t.co/mWsSGtgNYj