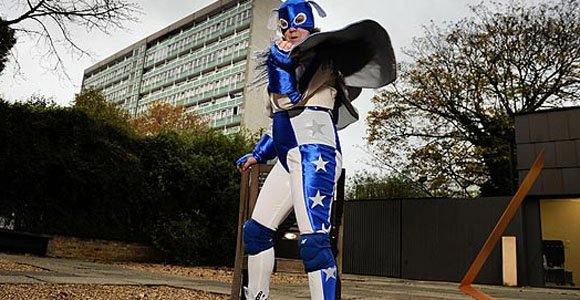 Jess Thom is a 31-year-old woman who suffers from tourette syndrome, an uncontrollable tic disorder. But instead of simply dealing with the cards she was dealt, Thom had decided to make something positive out of it – she made herself into a superhero called Touretteshero.

“Dressed as Touretteshero, Jess raises awareness of the disorder with children by playing games, costume-making and storytelling. Much of the focus is on how interesting it is for us all to be different,” writes The Sun.

Thom, who runs a blog about her condition and alter-ego, first experienced tics from Tourette’s when she was six. “Throughout her school years, she experienced involuntary movements and noises and remembers saving up her tics to let them out secretly in the bathroom,” they write. “No-one at school fully understood what was going on but by the time she was a teenager she realised she had Tourette’s. She was only properly diagnosed in her early 20s.”

Thom works with the youth to educate them about tourette’s, “Dressed as Touretteshero, Jess raises awareness of the disorder with children by playing games, costume-making and storytelling. Much of the focus is on how interesting it is for us all to be different,” but it was a negative experience with a rail employee that started her on the superhero path. “Despite explaining that her outbursts were not directed at him, the worker refused to help Jess – whose ticket would not work at the exit barrier – and she was left stranded,” writes The Sun

It is because of this that she began the not-for-profit social enterprise, Touretteshero, which she co-founded with friend and colleague Matthew Pountney.

It was during a conversation with Matthew in 2009 that the idea of Touretteshero began to take shape.

Jess was still feeling quite negative about her tics and would get upset talking about them.

But Matthew said her tics “were like a crazy language machine” and that it was wasteful not to do something creative with them.

Currently, Thom’s condition causes her to say the word “biscuit” up to 900 times an hour as well as other phrases. Thom posts work from local artists (around Peckham, south London) who interpret her frequent sayings. “Jess also experiences very regular physical tics which can make it hard for her to control her body, cause her to fall down on the floor, and, more recently, to have fits where she convulses for minutes at a time,” wrote The Sun.

“Tourette’s can be very socially isolating which is why understanding and awareness are important,” said Thom. “If I could give one piece of advice to parents of a child with Tourette’s, I would say talk about it and try and give them that ability and confidence to explain it to others.”

“Touretteshero is a powerful character,” said Thom. “Tourette’s is not the hero’s problem, it is her power”.

(via Tipster Mike, The Sun, image by Laura Page)