Tornadoes More Likely to Form Mid-Week Because of Human Pollution 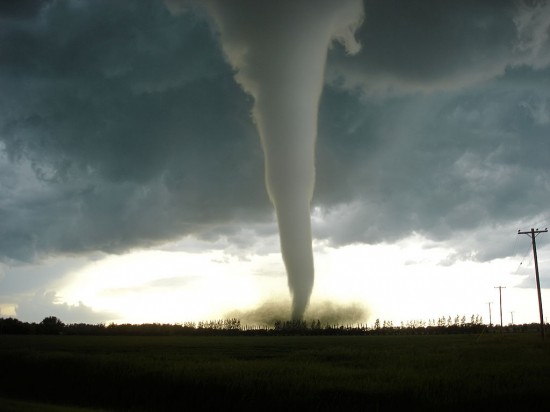 A new study has found that tornadoes seem to have an overwhelming preference toward forming in the middle of the week. This isn’t necessarily because the hyper-destructive funnel clouds are dedicated workers that live for the weekend, but rather because of the pollution created by humans commuting to work. Just another example of human beings sowing the seeds to their own destruction.

Looking at data set running from 1995 to 2009 from the National Oceanic and Atmospheric Administration (NOAA), study authors Daniel Rosenfeld from The Hebrew University of Jerusalem and Thomas L. Bell at NASA Goddard Space Flight Center found something odd. They found that tornadoes and hail storms were 20% more likely to form in the middle of the week. With results that slanted, it seemed clear that there is a preference toward storm formation during that time period.

Rosenfeld and Bell believe that this increase in storms is caused by a similar increase in aerosol pollutants that generally peak mid-week due to workers commuting to their job. Correlation is, obviously, not causation. However, the team has a pretty solid explanation as to what they think is happening.

Hail storms, the team says, are more likely to form in the presence of high pollution levels because water clings to the tiny polluting particles. These form into an unusually high number of water droplets which are lofted high up into the atmosphere where they form into balls of horrific hail.

The role of pollution in the case of tornadoes is more complex. National Geographic explains it this way:

First, the large icy particles of hail that pollutants help seed possess less surface area than an equal mass of smaller “hydrometeors”—that is, particles of condensed water or ice.

As such, these large hydrometeors evaporate more slowly, and thus are not as likely to suck heat from the air. This makes it easier for warm air to help form a “supercell,” the cloud type that usually produces tornadoes and large hail.

Interestingly, the pollution-storm interaction doesn’t seem to affect Western America because the air is too dry and the cooler regions of air too high up.

If further research supports these findings it could be a powerful argument for tighter regulation on air pollutants. After all, controlling destructive storms could be as simple as supporting busing programs or alternative power sources, in turn saving lives and untold millions of dollars. Perhaps the immediate threat posed by destructive storms may be better at provoking change than the dangers of global warming.