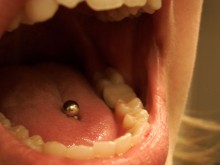 The tongue is a strong muscle that plays a role in our ability to speak and digest (and taste) food. But for paralyzed individuals, the tongue could also be the key to gaining some mobility. Researchers at Northwestern University, the Rehabilitation Institute of Chicago, and the Shepherd Center in Atlanta have launched a clinical trial of a tongue drive system for wheelchairs.

The system is based on first piercing users’ tongues with a magnetic stud. A headset with sensors that can read the magnetic signals emitted from the piercing is worn by the user, who moves their tongue to signal the desired movements of their wheelchair. For example, pointing the tongue to the upper left corner of the mouth will signal the wheelchair to move forward.

The tongue drive system was developed by Dr. Maysam Ghovanloo, an assistant professor of electrical and computer engineering at the Georgia Institute of Technology. Current wheelchair command systems can be bulky, or even block the user’s face as is the case with the “sip and puff” technology, which steers a wheelchair by having the user breathe through a straw.

Ghovanloo wanted to develop a wheelchair control mechanism that would give users more control and flexibility, in addition to having a better asthetic. The tongue seemed like the perfect part of the body to try to implement because control over the tongue is something that even severely disabled people tend to retain, and is not affected by spinal cord injuries because the tongue is connected to the brain through a cranial nerve.

The first attempt at a tongue controlled wheelchair, though promising, was not particularly successful. The initial version had researchers glue a magnet to a user’s tongue, but it was discovered that after a few hours the magnet would simply fall off. The idea of a piercing with the needed magnet was suggested to the researchers by Dr. Anne Laumann, an associate professor of dermatology at Northwestern who studied body art. After working with the piercing based tongue drive system for five years, the research has been translated into a clinical study.

Approximately a quarter of a million Americans suffer from spinal cord injuries, with an estimated 10,000 new injuries occurring each year. Millions of others experience some form of paralysis, which can be caused by a variety of conditions including stroke, multiple sclerosis or cerebral palsy.

The researchers say the tongue drive system could be developed to execute even more complex tasks, with perhaps even each tooth used to signal different commands.

(The New York Times via Neatorama)