Rumor: Tom Hiddleston May Play The Crow. Fact: This Will Obliterate Fans If True. 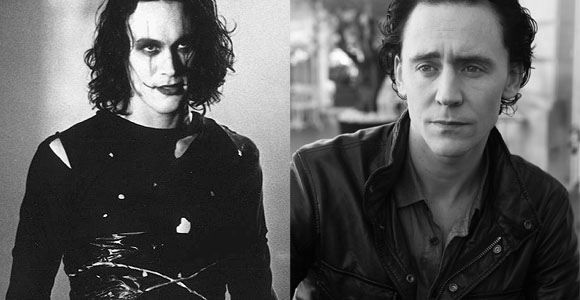 I think Hollywood just made me give a crap about The Crow remake.

Here’s the thing: remakes usually annoy the lot of us but when they choose the right actors/story, some of us are willing to give them a shot. And for me, at least, so it goes with The Crow remake, which I previously was against.

When last we left the project, it had already seen a few big-name actors paired with the role Brandon Lee made famous in 1994. James McAvoy was said to be in talks to play Eric Draven but Mark Wahlberg and Bradley Cooper had already come and gone.

Now, The Wrap says “individuals close to the project” name Hiddleston as being in talks. They write:

Hiddleston recently had dinner with producers and sent them a makeup test that he did on his own in London. He will undergo a proper makeup test in the coming days, as the character’s appearance is important to fans of the franchise, who should be delighted with the casting of a major member of the Marvel universe.

Acclaimed Spanish filmmaker F. Javier Gutierrez (“Before the Fall”) is directing “The Crow” from a script by Cliff Dorfman (“Warrior”), though it’s possible that other writers will be credited as well.

Production is tentatively scheduled to begin this fall, though the timetable could move slightly depending on several factors.

Hiddleston doing his own makeup tests would not surprise me in the least but let’s consider the implications of this possible casting. The Crow was based on James O’Barr’s comic of the same name and was a quick obsession for fans but more-so after Lee brought the character to life on film. [Full disclosure, I was one of those girls in high school who couldn’t stop staring at the boy who showed up in Crow makeup. It was a whole thing.] Fandom is already obsessed with Hiddleston thanks to his time as Marvel’s Loki, taking on this particular role would likely skyrocket them into space. At least that’s my take on it.

“Hiddleston appealed to producers who were enamored with his ability to project both a light and dark side. He has also displayed gifted physical talents as the villainous Loki in ‘The Avengers,’ as well as impressive dramatic chops in the acclaimed indie film ‘The Deep Blue Sea,’ ” wrote The Wrap.

What do you think? Could Hiddleston be the perfect actor to play Eric?