They Are No Men: Tokien's 6 Most Bad-Ass Forgotten Ladies | The Mary Sue

They Are No Men: Tolkien’s 6 Most Bad-Ass Forgotten Ladies 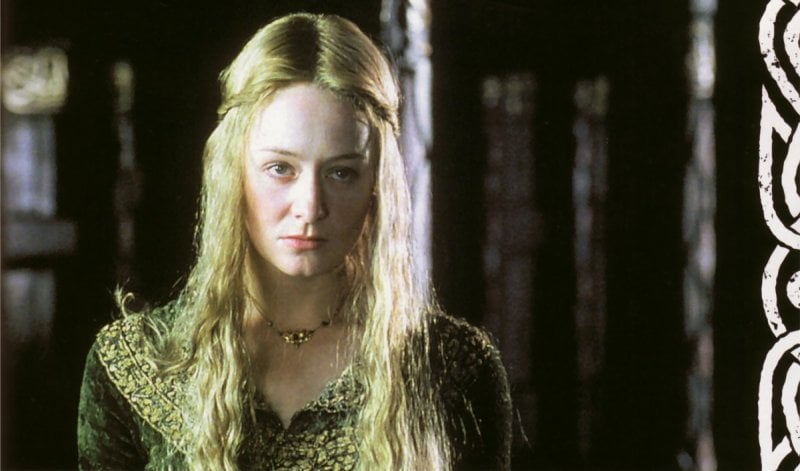 J.R.R. Tolkien isn’t exactly known for his “strong female characters.” Despite Éowyn’s memorable moment of triumph, the fact remains that The Hobbit doesn’t have a single female character (other than a brief mention of Belladonna Took), and The Lord of the Rings fares little better – I can think of five named women who appear in the entire series.

Nonetheless, the relative absence of women in Tolkien’s better-known works does not mean he never wrote any. Tolkien’s wider mythology, as published in The Silmarillion and Unfinished Tales, contains a number of memorable female characters that, outside of a small community of aficionados, all too often go unmentioned.

Here’s to some of Tolkien’s lesser known ladies. Whatever the shortcomings of their narrative treatment, may they not be entirely forgotten. 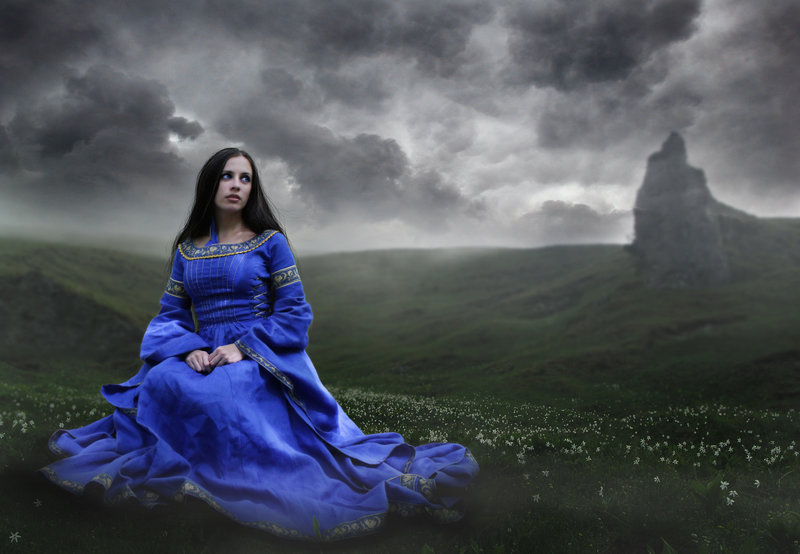 Odds are if you’ve heard of any one non-Lord of the Rings female character, it’s Lúthien. Her story appears in various forms across Tolkien’s work, including briefly in The Fellowship of the Ring, where Aragorn sings a portion of the story to spellbound hobbits. Aragorn’s relatively brief description of the story, centering on the meeting between Lúthien and her mortal lover Beren, hardly does her justice.

The daughter of one of Tolkien’s semi-divine Maia, Melian, and an Elf lord, Lúthien falls in love with Beren, a shaggy vagabond at the time. Her father sends him on a seemingly unachievable quest to retrieve one of the Silmarils (powerful jewels filled with divine light, to put it simply). Thus far, things seem fairly straightforward, and not really about Lúthien at all – she is the object of a love quest, the reason for Beren’s heroic adventure.

However, Lúthien is not content to remain safely at home. Escaping from a treehouse in which her father has imprisoned her using her magic powers (she has those!), Lúthien takes off in pursuit of Beren. She rescues him from Sauron’s dungeons, forcing Sauron to flee – the same Sauron that threatened the whole world in The Lord of the Rings. With Beren in tow, Lúthien then confronts Morgoth, the god-powered Satan of The Silmarillion (Sauron’s boss at the time). Through her dancing, Lúthien puts Morgoth to sleep so that Beren can cut a Silmaril out of his crown. Finally, when Beren is killed by a giant wolf, Lúthien travels to the world of the dead to plead for Beren’s life, and manages to move the merciless god of the dead for the only time in Middle-Earth’s history to pity.

For those of you keeping score, then: Lúthien manages to subdue two dark lords, saves Beren’s life on multiple occasions, and makes a daring escape from her father.

She also manages to thwart two dastardly sons of Fëanor attempting to force her into marriage. (For more on Fëanor and his sons, read Mariah Huehner’s hilarious recaps starting here.)

As the only character to take down Morgoth in single combat, she is indisputably the most powerful character in Tolkien’s universe. 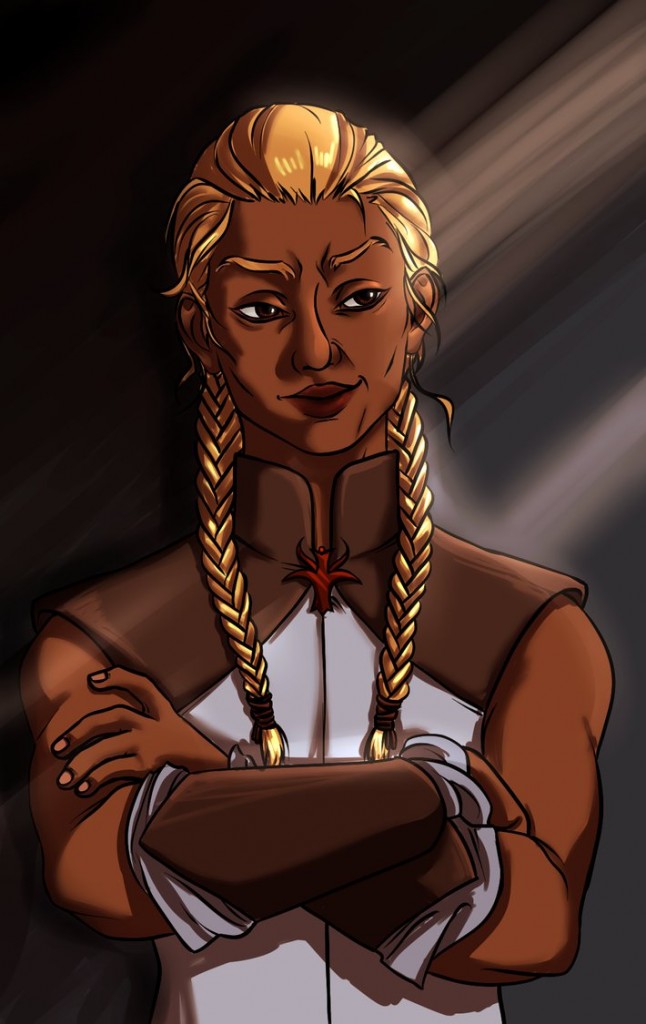 Most of the notable Men in Tolkien’s works are just that – Men. Haleth stands as a remarkable exception. Her people are the second group to cross into Middle-Earth. After her father and brother are both killed by Orcs, Haleth becomes their chieftain. Her people arrive in lands belonging to an Elf, Caranthir, and under Haleth’s leadership they hold off attacks for seven days. When offered land and protection under Caranthir’s rule, however, Haleth refuses, and she leads her people further westward. Tolkien makes a point of noting that she manages to bring them through dangerous country “by the strength of her will.” This may not sound like much, but given the relatively spare character descriptions in The Silmarillion, that Tolkien bothers to comment on Haleth’s will at all suggests that it must be prodigious indeed.

Haleth and her people settle in lands bordering the isolationist Elven kingdom of Doriath. When the king of Doriath grants them the land on condition they don’t make deals with Orcs, Haleth response is so excellent that I have to quote it directly: “If the King of Doriath fears a friendship between Haleth and those who have devoured her kin, then the thoughts of the Eldar [Elves] are strange to Men.”

Haleth is a rare instance of a female leader of a whole people, and one of the only characters that survives to die of old age, remaining leader of her people throughout her life. After her death, they raise a mound for her, the name of which translates to “Lady-barrow.” I hope it was engraved something like this headstone. “Haleth of the Haladin, killed over 9000 orcs, ‘we hope she has gone to rest.’” 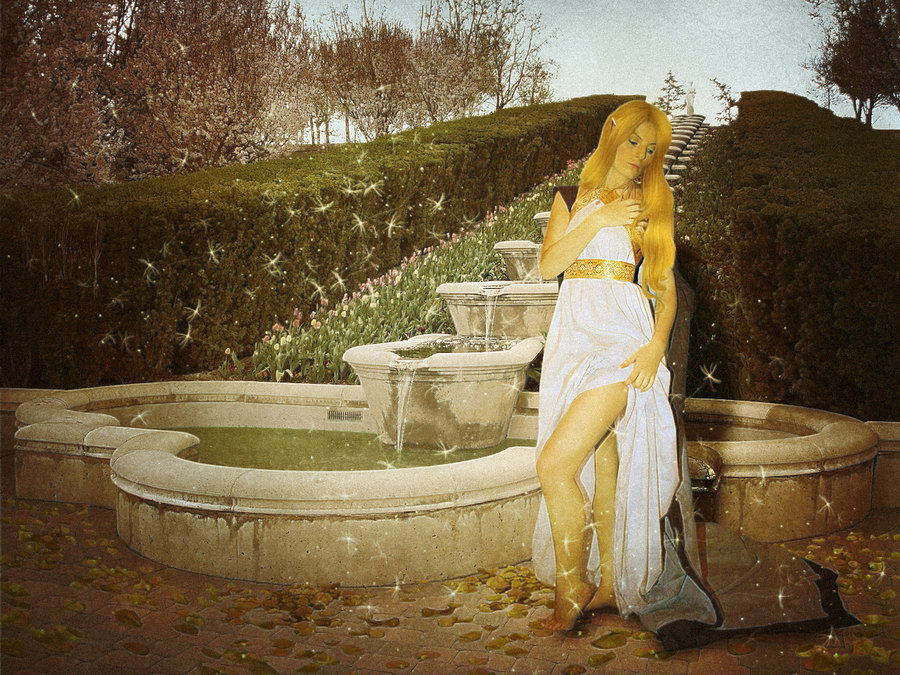 Most fans of The Silmarillion tend to talk about Idril in terms of the fact that her cousin has a creepy, stalker-ish crush on her, which I think is a major oversight when they could be talking about the fact that she single-handedly managed to have a secret tunnel built out of her father’s secret city without anyone knowing, a move which was the only reason anyone got out of said secret city alive when it went down in literal flames. There’s something to put on your resumé: built a secret passageway that managed to save a pretty good number of people from a burning city. Like a boss.

She also as a small child crossed a massive ice field that killed her mother and a whole lot of other people, so probably we should’ve known she’d turn out totally metal.

Oh, yeah, I guess she is also the mother of Tolkien-Jesus. But the real takeaway here is that whole “leader and savior of her people in her own right” thing. 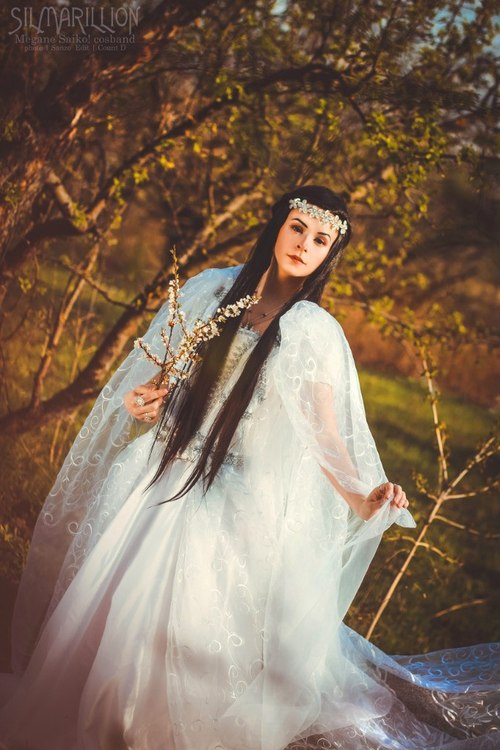 Aredhel is one of my personal favorites, if for nothing else than her fantastic “I do what I want” attitude. Best friends with the sons of Fëanor despite the fact that their families are basically the Hatfields and the McCoys, Aredhel leaves her brother’s secret city to go adventuring, telling him what basically amounts to “you’re not my real dad.” (The actual quote is better: “I am your sister and not your servant,” which I am remembering for any time my siblings try to tell me what to do.)

So Aredhel basically goes exploring all over Middle-Earth, and eventually ends up losing track of her escort in some haunted valleys. Not to be deterred, she keeps going and winds up at the former holdings of the aforementioned sons of Fëanor. They aren’t around at the moment, though, and Aredhel gets bored of waiting and takes off again.

Unfortunately, this is where Aredhel gets kidnapped by the Dark Elf Eöl. (Whenever someone in Tolkien has “Dark” in their name, you can generally assume they’re bad news bears.) She does eventually escape, only to die flinging herself in front of a javelin meant for her son. Which as far as tragic ends in The Silmarillion go, is…not too shabby, actually. 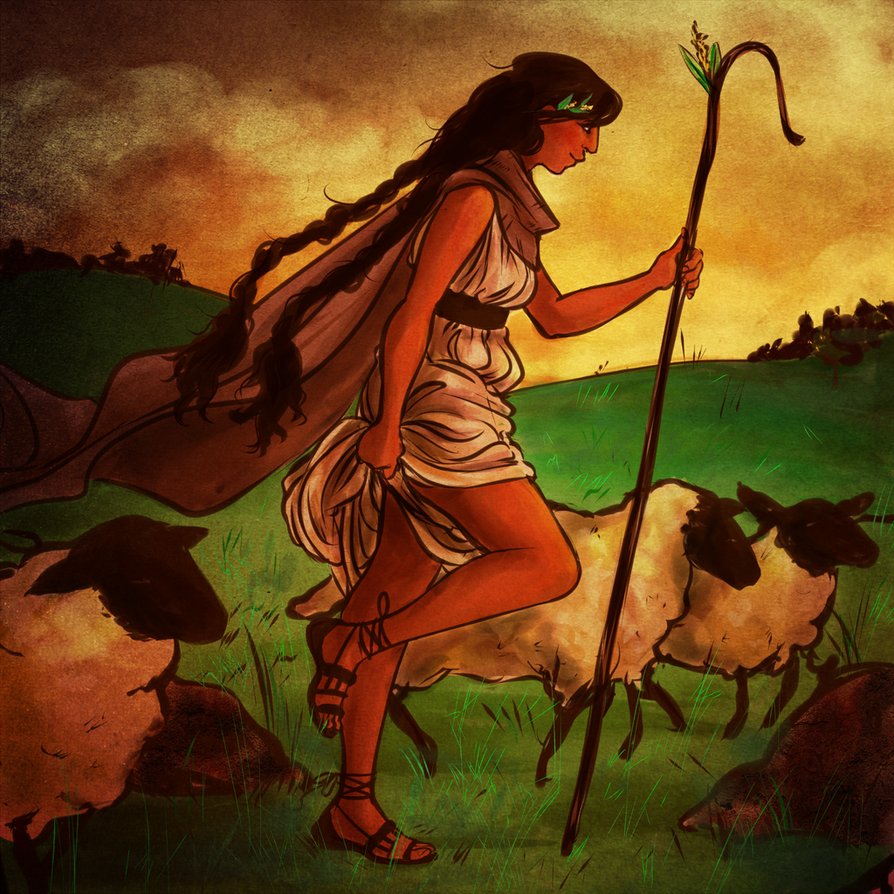 Ancalimë – later Tar-Ancalimë – was the first reigning queen of Númenor. One complaint frequently leveled against Tolkien’s female characters is that they are all pure and perfect – Ancalimë is one example that that is not always the case. Raised by her mother, Erendis, who was embittered by what she felt was her husband’s abandonment, Ancalimë grew up solely with the company of women, mistrustful of men.

When she gets tired of being courted by her suitors, Ancalimë deserts her father’s court and becomes a shepherdess. Tolkien describes her as willful and clever, playing her parents against each other deliberately. She marries only reluctantly to thwart her first cousin from usurping her rule, and her relationship with her husband is difficult and antagonistic.

My personal favorite of her lines is her declaration to her future husband that her preference is for the man “Úner,” meaning in Tolkien’s fictional language “Noman.” Burn. As far as fictional misandrists go, I like this one. 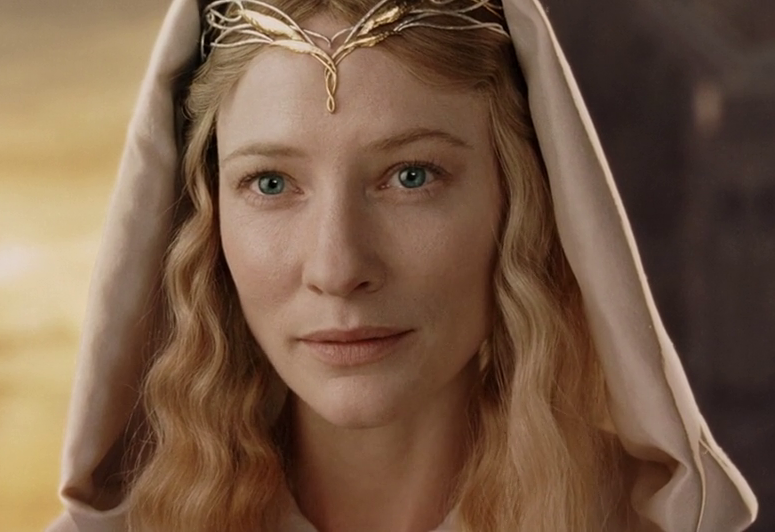 “Oh, come on,” I can hear you saying. “Everyone knows who Galadriel is. She was in the movies, she’s not obscure.” True, but the Galadriel of The Lord of the Rings is only a glimpse of her full character. She is one of the sole survivors from the First Age to live all the way through to the events of The Lord of the Rings (there are, like, three), and the only surviving member of the Noble and Most Ancient House of Finwë, also known as the family from which most of the great heroes of The Silmarillion came.

So. Galadriel. In her early years Galadriel was known as Nerwen, literally “man-woman” for her tomboyish behavior. When her uncle Fëanor (for reference, the man who slammed the door in Tolkien-Satan’s face) asked her for some of her hair for crafting purposes, she told him to back off and take his weird, creepy interest in her hair elsewhere. When that same uncle rebelled against the gods, she decided to leave the paradise of Valinor for new lands, both out of curiosity and explicitly because she wanted to rule her own land. When the Noldor, her father’s people, attacked another group of Elves, the Teleri, Galadriel took up weapons and fought on behalf of the Teleri, her mother’s people, against their aggressors. And that’s barely even getting started.

Sorceress, warrior, and seer, Galadriel also personally oversees the expulsion of Sauron from Dol Guldur. I’m still a little disappointed that Peter Jackson didn’t take that opportunity to put Galadriel in some armor. After all, she has to have some lying around somewhere from her battling days, eh?

These six women are only a small selection of a number of potential contenders I considered while writing this article. There is Morwen, who maintains her dignity and pride during what is basically a Greek tragedy in Middle-Earth; Elwing, who turns into a bird rather than give up on her husband; and Erendis, who is so sickened by men’s treatment of women that she resolves to raise her daughter in a world without them.

But you don’t have to take my word for it.

Elise Ringo is a freelance writer and enthusiastic fan of a variety of nerdy pursuits. Her twitter is @veliseraptor, which is a pun on her name because dinosaurs are awesome.