We're mad as Hell, and we're not gonna take it anymore. 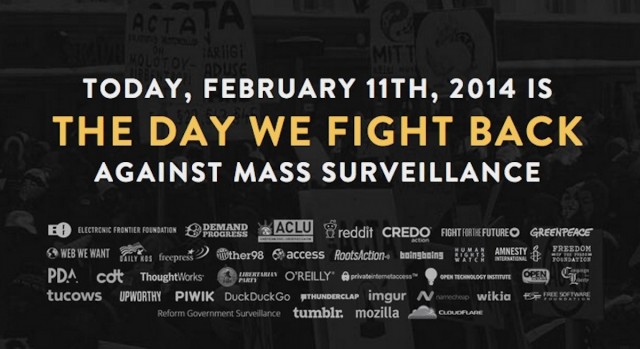 Tons of prominent sites around the ol’ Interweb are already participating in spreading word of the event, and you can get involved by placing a call (or an e-mail, because it’s not 1852) to your senator and giving them this message:

I’d like Senator/Representative __ to support and co-sponsor H.R. 3361/S. 1599, the USA Freedom Act. I would also like you to oppose S. 1631, the so-called FISA Improvements Act. Moreover, I’d like you to work to prevent the NSA from undermining encryption standards and to protect the privacy rights of non-Americans.

If that doesn’t help you get out all of your frustrations, you can also generate some memes and spread the word on social media with #stopthensa. You can also head over to the event’s main site and share directly from there. They’ve also got information on why exactly you should support one bill and what’s so bad about the other, and there are fun details on the NSA’s operations, such as:

The NSA is collecting the content and metadata of emails, web activity, chats, social networks, and everything else as part of what it calls “upstream” collection.

The NSA “is gathering nearly 5 billion records a day on the whereabouts of cellphones around the world.”

The event is being held today on the anniversary of the death of Internet activist Aaron Swartz. Swartz was instrumental in stopping the Stop Online Piracy Act (SOPA) in 2012, which was a bill that aimed to stop Internet copyright infringement, but Swartz and many others feared it would destroy the ability to freely share information.

SOPA was stopped through widespread action, and if the NSA’s surveillance is to be stopped, this is exactly the kind of thing we need. If you need something to whip yourself up into a righteous frenzy, Reddit has an excellent blog post about what exactly is wrong with the NSA’s actions and why you should get involved.

So, get to it, Internet. This time, your powers to make large numbers of people angry can be used for good.