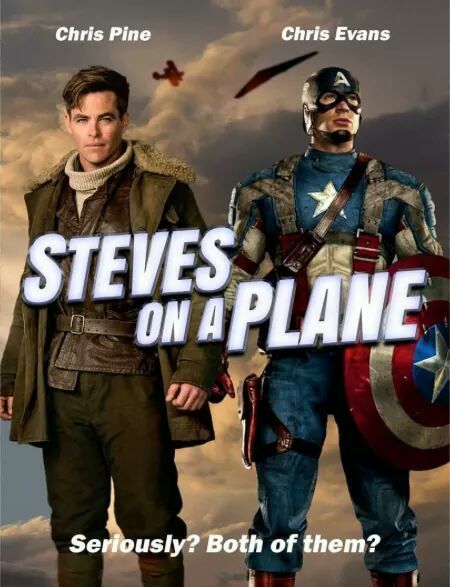 There is a fifth dimension beyond that which is known to fandom. It is a dimension as vast as space and as timeless as infinity. It is the middle ground between light and shadow, between science and superstition, and it lies between the pit of fans’ fears and the summit of their knowledge. This is the dimension of imagination. It is an area which we call the TMS Slack Zone.

From time to time, we here at The Mary Sue have Slack conversations that spin off wildly into “Are We Just Writing Fanfic Now” territory. Submitted for your approval, here is a fanfic that grew out of the above image (from thecaptainoutoftime on tumblr) that quickly spiraled out of control and crash landed in … the TMS Slack Zone.

Snatching the copy of Destinations from the seat back pocket in front of him, Steve Rogers let out a heavy, tired sigh. “They can put a man on the moon,” he muttered to himself. “But they can’t figure out how to make more space in an overhead compartment.”

A voice came from the slow-moving, cowherd-like procession of passengers in the center aisle. “You can say that again, pal.” It was attached to a smiling face and an extended hand. “Name’s Steve. Steve Trevor.” Steve couldn’t help but notice his immaculately sparkling teeth and well-coiffed hair that seemed to defy gravity. He met Steve’s hand with his own, and somehow the universe did not fold in on itself.

Someone else in the line groaned, rolling their eyes so hard that Rogers thought they’d fall out and roll across the floor. “Oh, come on.”

“Whoops,” said Trevor, with much chagrin and a wave to the eye-rolling passenger. “Let me just …” He quickly shoved his bag up in the impossibly-packed overhead compartment and flopped into the seat next to Rogers’. “Looks like someone in ticketing wanted to play a little joke, huh?”

“Yeah, something like that.” Rogers eyed Trevor, giving him a once over. He wasn’t sure why—it was just something he did since he left his shield behind with Tony. But he couldn’t help himself. His kindness won out. Something told him he could trust this man, Steve or not. “Believe you me, I’d be laughing if it wasn’t so darn warm and uncomfortable in these jets.”

Trevor smirked, arching an eyebrow. “You call this a jet, pal?” He reached up to turn on the air conditioner knob. “I’ve flown jets, and this thing? This thing’s a big bus. Greyhound of the skies, we call ’em.”

“Oh, are you military?” Rogers asked. It was only now he noticed the small tattoo of what may have been wings peeking out from under Trevor’s bomber jacket. Trevor followed Rogers’ gaze and pulled his sleeve up the rest of the way, showing off a tattoo of what Rogers instantly recognized as a World War I-era fighter.

“Something like that.” was Trevor’s reply. “How about you?”

Rogers instantly tensed up and turned away. “Ex.”

Of course Trevor noticed. There was no way he couldn’t notice Rogers’ sudden change in body language and how he seemed to … did he just flex? “Uh … huh. What branch? Or, uh … what ex-branch?”

Rogers just pursed his lips and looked down at his shoes. “Army.”

At that, Trevor slapped Rogers on the shoulder. “No kiddin’, huh? That’s swell. I was … well, I was Air Force, myself.” Rogers nodded. “Neat.”

Sensing the conversation was going south, Trevor began to fidget just a bit. “Well … ah, okay then. So … why are you headed to … ” Trevor fished in his jacket pocket for his boarding pass. ” … Canada?” He furrowed his brow. “Wait, we’re going to Canada?” He started looking around the cabin.

“You … didn’t know this plane was going to Canada?” Rogers asked. “How does someone get on a plane and not know where it’s going?”

“I mean, it’s not like I booked the damn flight.” He’d have to have a conversation with Diana about all this cloak and dagger and misdirection stuff. He’s the spy, after all, and they’re in peacetime, why shouldn’t he be the one who decides how to … ah, heck with it.

With a strong sense of finality, the cabin door sealed itself shut. Rogers picked up Trevor’s seatbelt and offered it to him. “Better buckle in, pal, cause it’s going to be a long flight to the Great White North.”

Trevor could only pout as he buckled himself in.

As the plane backed away from the gate for taxi and takeoff, Rogers nudged Trevor. “Oh, man, I love these little safety videos they show us.” He brightened up considerably, and it rubbed off a little on Trevor’s now-soured demeanor. Rogers began to sing along. “I got some safety tips … that you gotta know …”

Trevor was determined to stay under his little storm cloud. But Rogers continued on undeterred. Heck, he started dancing in his seat, much to the dismay of the poor passenger sitting behind him. “… and trust me, it’s something that you wanna hear.”

Squinting just a bit, Trevor relented. “So zip your lips and enjoy the show … before we move into the stratosphere …”

Jazz hands. Bouncing around. The poor sucker who thought they were getting a better deal out of an aisle seat next to the pair immediately began to regret their seat choice. She reached up to try to activate the Call Attendant button, but Trevor grabbed her hand and began to mock-swing dance with her. She even began dancing just a bit as Trevor moved back to sing the rest of the song with Rogers.

His mood considerably lightened, Trevor leaned back in his seat. Maybe this flight won’t feel so long after all.

Rogers tapped Trevor on the shoulder. “Trevor, don’t you find it strange that we’re asked to put on our own masks before helping children? I’ve always thought it was a little odd.”

Trevor grinned. “You haven’t been in many plane crashes, have you?”

“They never give you enough nuts in these snack packs.” Rogers stuffed the empty bag into the seat back pocket in front of him.

“Back in my day…” They pause, realizing that they both just said the same thing. Trevor winks and fires some fingerguns at Rogers.

36,000 feet up in the air. Beginning landing approach.

“Tell me, Rogers, have you ever seen Fight Club?”

The pair laughed and joked all the way down the aisle and up the jet bridge. “Well,” Trevor said with a sigh. “Thanks for the great ride, Rogers.” He held out his hand, again flashing Rogers with that winning smile, the same smile he gave him back when this whole journey just began. It was only a few hours of Rogers’ life, a few hours spent out of his admittedly already abnormally long lifespan. But despite the relatively short amount of time they spent together, Rogers found himself wishing what he wished so long ago with Peggy—that he had just a little bit more time.

At that, Steve Rogers, Captain America, the eternal boy scout, did something he never thought he’d do. He stole something from Trevor: a kiss. A bare grazing of lips on a stubbled cheek, under widened, surprised eyes.

Rogers turned beet red, sure that he looked just like the Red Skull in that moment. He nodded, muttered a “… bye …” and sprinted away.

Trevor stood at the gate, his hand still extended as if for a handshake. A slip of paper carrying Rogers’ number rests carefully in his palm. He looked down at it, as one might look at a freshly-born baby chick.

“Diana’s never going to believe any of this.”