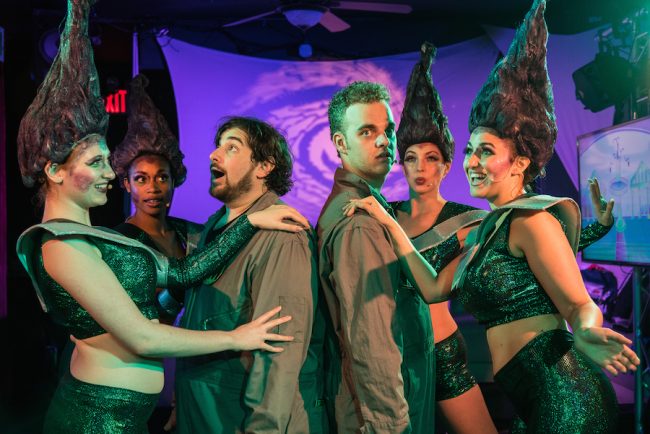 Last week, Kaila and Charline went to the retro-futuristic musical comedy Wild Women of Planet Wongo which, unfortunately, ends its run this week. The story centers around two astronauts landing on a planet of beautiful warrior women and it’s full of energetic dance numbers, catchy songs, and an old fashioned silliness that’ll transport you back into those sci-fi B-movies we all know and love.

Dave Ogrin, composer/co-lyricist and producer, cites Little Shop of Horrors and Rocky Horror as influences for his team of collaborators Steve Mackes and Ben Budick. The immersive environment (we were standing in a room that went from planet to spaceship through props and screens) was born from shows like Sleep No More, resulting in some hilarious and engaging audience interactions. That combination of genres means there’s probably something in there for everyone, and a delicious green Wongotini that we both agreed tasted like a liquified Jolly Rancher only makes it funnier.

Let’s break down our reactions to Wild Women of Planet Wongo, since we found some parts great and other parts less than ideal.

Charline: I can see people finding the “two dudes crash on a planet full of beautiful women” premise questionable, but I think a sci-fi sensibility lets you know that anything too Utopian or perfect inevitably turns sour. The two guys think they’re in for a sexy time, but the women have some other more sinister plans of enslaving them. Neither of us really knew what to expect going in, but we jumped on board pretty quickly.

I also appreciated that they space made a point to announce that anyone harassing the women would immediately be kicked out.

Kaila: Fans of campy science fiction and sci fi classics will feel right at home here. While the set-up feels pretty familiar—Twilight Zone Trek Futurama—since Wongo is in a world all its own, we’re never quite sure where it’s going to go next, and you’re guaranteed to never be bored. There’s two short intermissions throughout the show where you can grab more Wongotinis and the actors keep the action going with tongue-in-cheek immersive games involving the audience members. A fun time to be had by all is encouraged from the start.

The Space and Performances

Charline: We were in a pretty small space, but I feel like they used it really well! We were encouraged to move around which allowed people to listen to off-side conversations, murmurings, and other details. The actors also move around a lot, which meant that there really isn’t a bad seat in the house.

The stand-out performance for me, by far, was that of the Wongo Queen who has this amazing ability to perfectly enunciate all her lines in this fantastically shrill and camp tone. She yelled at me to move out of the way and I think I fell in love.

Kaila: With the way the play plays out, it really turns into more of a big interactive party for the audience. You’re in the spacious back room of a bar, and are moved around by the actors and the action throughout the night. Audience members are encouraged to take pictures, and if you wear a fun wig to the performance, there are drink discounts. It’s a transporting way to leave the rest of Earth behind on a Friday night.

The two male performers play a more serious captain and his horndog sidekick and both are game in their roles. But the wild women of planet Wongo are the big draw and the ladies do the heavy lifting here, dancing and singing in outrageous outfits and sky-high wigs. Charline and I both adored the Wongo Queen, who stalked about commanding her minions and coming up with sneaky plots with impressive Queen Bee flair.

Kaila: Wongo Wu-wow! I hadn’t known there were going to be musical elements and they’re definitely light-hearted and catchy.

Charline: There’s a point in the show where one of the astronauts, in an attempt to escape, seduces the Wongo Queen and ties her up. While you know nothing terrible is going to happen because the show is told in a light-hearted manner, we weren’t huge fans of this turn of events.

There’s also a small cross-dressing gag, where one of the astronauts incites a protest by disguising himself as a Wongo Woman and hands out protest signs to the Wongo Women who eagerly jump on board.

We asked Ogrin about this, here’s his answer in full:

Wongo is about resisting authority and changing out-dated rules, which is about as current a topic as you can get. We had a show the same day as the Women’s March back in January. A lot of our audience that day commented that they had been holding protest signs, much as the characters do in Wongo, and our show seemed incredibly relevant.
WWOPW is a parody of films created in a time before people thought about gender dynamic issues. We could have reversed the gender roles but that would not have stayed true to the genre. And the men get it worse than the women – they are turned into man-slaves for example. In the end, all the characters learn from the experience and end up in a better place than they started. We do all in a light hearted way and audiences are usually eager to go along with the ride.

The image of a man being the inciting incident for a women’s protest wasn’t my favorite thing, but I also acknowledge that WWOPW is a parody of old films that probably isn’t meant to be interrogated in that way. At the same time, it means I can’t comfortably recommend the show to everyone.

The themes of the show explore how misinterpreted doctrine can be harmful and challenging tradition for tradition’s sake should be questioned. Although I was less-than-eager about how it got there, that’s a message I do agree with. Since I firmly believe gender dynamics have always been on people’s minds either explicitly or implicitly, I believe the best way to read WWOPW is an adaptation of many of these older films with some imperfect updates.

Kaila: The scene of the Queen’s capture made me incredibly uncomfortable. We spend our days here at The Mary Sue looking at the treatment of women in media, politics, and the workplace and this depiction took the mostly silly and good-natured gender dynamics of the play to a level that I felt unnecessary. The Queen is bound down to a bed and gagged—at which point I actually exclaimed out loud, “Oh my god, no,” and felt a strong desire to break all the fourth walls and go and free her. I almost did it, this scene took me so much by surprise. Charline and I just looked at each other with our eyebrows Spock-high.

It doesn’t matter that she was cooking up nefarious plans—her captor doesn’t know that at the time. And later in the play, after events have resolved, she states that she rather liked that treatment. The whole bit could be axed and not lose any plot salience, and so it’s hard not to see the scene as exploitative.

Do We Recommend It?

Charline: Despite some of the moments above, the thing is we had a lot of fun! If you love “so bad it’s good” B-movies and silly musicals, WWOPW is a love letter to all those things. I think it’s worth a visit to the Wongo Queen, but it’s not for everyone.

Kaila: I had fun at the show, and it was a really different way to spend a Friday night. As a longtime fan of science fiction it was interesting to see where they went with long-established tropes. The cast works incredibly hard to keep everyone entertained, and they wrangle the crowd with ease. By the end, most of the room was dancing. It’s definitely not Sleep No More.

We’ve discussed our reservations, and while I have some friends who I would not take to this show, I have others who I know would love it. All hail the Queen.

You can learn more about the production here.