Enter to Win Game of Thrones: The Complete Third Season on DVD! | The Mary Sue

Enter to Win Game of Thrones: The Complete Third Season on DVD! 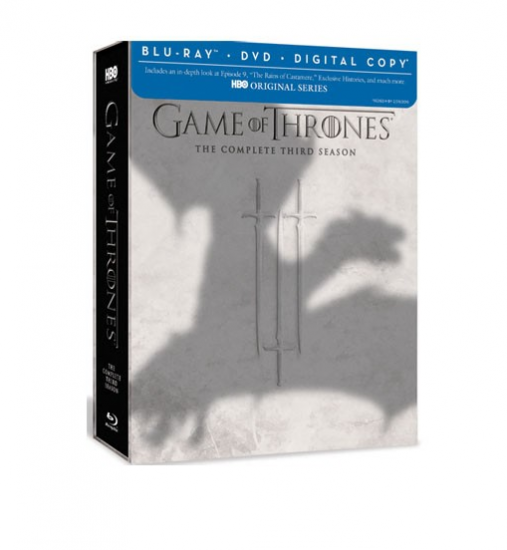 Spring is coming, and you know what you’re going to want to watch once you can stop huddling together under a blanket for warmth: Game of Thrones season three. You know, so you can get to the end of it and go right back to huddling under that blanket, only this time with more crying. Thanks to HBO, we’ve got a copy to give away! Read more to find out how to enter.

This contest is OVER. Don’t enter anymore. Thank you.

But first, here’s what the lucky winner will be getting:

The Blu-ray with HBO Select and DVD bonus materials in Game of Thrones: The Complete Third Season contain multiple featurettes, extended and deleted scenes, and audio commentaries. Additional features on the BD release include interactive guides, illustrated histories, and an extensive feature on the creation of “The Rains of Castamere,” containing nearly two hours of never-before-seen material, as well as new looks at the infamous “Red Wedding.”

Blu-ray with HBO Select – includes all DVD features plus:

And now, here’s how to enter: how you do you get your hands on the ones we have to give away? First, you’ll need a Twitter account. Second, you’ll want to follow The Mary Sue. The easiest way to do that is to click this button:

Can you believe @TheMarySue wants me to #ReliveTheRedWedding with their @GameOfThrones S3 blu-ray giveaway? http://bit.ly/1jtfFn0

Please remember, if you do not follow @TheMarySue on Twitter WE WILL NOT BE ABLE to contact you if you win and you will be disqualified. (Be sure to keep an eye on your Direct Messages!) The contest is open to addresses in the U.S. and Canada only. Each person may only enter once and entries must be received by 9:59 AM, Eastern Standard Time, Friday, February 14th, 2014. We will randomly pick 1 winner and contact them soon after the contest ends. Good luck!