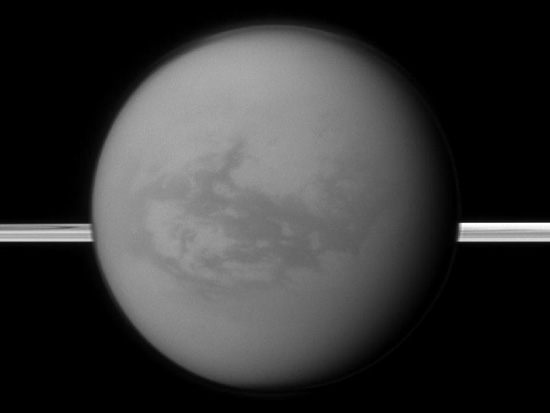 Saturn’s moon Titan has been of particular interest to scientists because of the tantalizing hints that the moon could possibly support life. A new study by NASA presented scientists with a new mystery on Titan: A series of methane lakes recently discovered around the equator, where no lakes were thought to be possible. How they got there seems to indicate that this distant moon may be far more complex than originally thought.

According to NASA, the lakes were found through analysis of older infrared spectrometer data from the Cassini probe which has been cruising around Saturn since 2004. The lakes are not composed of water, but of liquid methane — the chemical which drives the weather on Titan similar to water on Earth. One of the larger lakes (or large puddles, really) is estimated to be about three feet deep and half the size of Utah’s Great Salt Lake.

The find is surprising as the middle regions of Titan were thought to be completely arid. NASA scientist Linda Spilker explained, in a press release:

“We had thought that Titan simply had extensive dunes at the equator and lakes at the poles, but now we know that Titan is more complex than we previously thought[.]”

Our understanding of Titan’s weather system showed methane evaporating from the equator and drifting toward the poles as a vapor before condensing and falling as rain. Methane lakes around the moon’s polar regions were expected as part of this model, and have been found through previous analysis of Cassini radar data, but not equatorial lakes. They simply should not be there.

The solution to this mystery could be underground aquifers of methane, which I suppose makes it a methafer or something. If this is the case, it would also explain why Titan has so much methane — something the current model fails to explain. According to NASA, the Cassini data showed that these lakes remained around the equator despite little methane rainfall in the area, suggesting they were produced by some other process.

The results of the analysis were published in the journal Nature, with NASA researcher Caitlin Griffith as lead author. She explained the significance of methane on Titan this way:

“Methane is a progenitor of Titan’s organic chemistry, which likely produces interesting molecules like amino acids, the building blocks of life.”

Though the discovery of these lakes sadly do not provide a clear indication as to whether life — in some form — exists on Titan, it does change our understanding of this intriguing little world. There’s clearly quite a lot going on up there that we are only just now discovering.