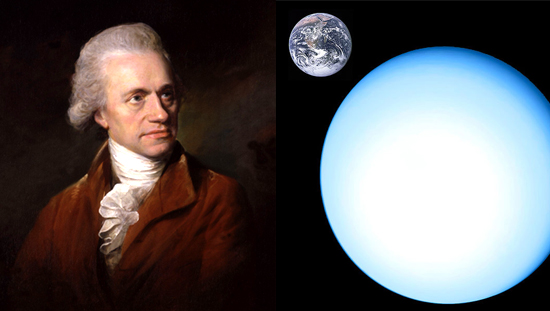 We love our planets. We clap our hands when we discover something new about one, we raise our hands when their moons need naming, and we lament when it turns out one of them isn’t a planet after all (but we secretly still pretend it is). We also positively freak out when we discover a new one. For example: On March 13th, 1781, astronomer Sir Frederick William Herschel announced the discovery of Uranus. Astronomical comedy was never the same, because no celestial object can generate more jokes than Uranus.

The interesting part of this story is that we already knew about Uranus. It was up there, drifting dimly, one of the few planets visible to the naked eye — just barely, if you knew where to look. English astronomer John Flamsteed noticed it almost one hundred years prior, but we always just assumed it was a star.

It wasn’t until Herschel did a survey of all stars down to a magnitude eight — those significantly dimmer than can be seen by the naked eye — that he noticed one that was a little off. He assumed it was a comet. It moved differently, but it did lack a tail. The others he told about his findings believed it was a planet long before he did, but Herschel — Sir Freddy to his friends? — is still credited with finding it. Oh, and he also discovered infrared radiation, and the Herschel Space Observatory is, of course, named after him.

And because Pluto hasn’t been in the news enough lately, it’s worth mentioning that on this day in 1930, Pluto’s discovery was also announced. They’d known about it for almost a month by then, but they held off talking up the then-9th-planet to coincide with Uranus’s 1781 debut.

Hey, did you ever notice that Uranus breaks the mold of planetary names? Uranus is Greek god (the father of Cronus, aka Saturn), sort of, not Roman like all the rest. Mostly this seems to be because there really wasn’t any Roman equivalent. They called him Caelus, the Sky Father, but he wasn’t a proper god in Greek myth — more of a primordial personification of the sky born from Chaos. Mythology is murky.