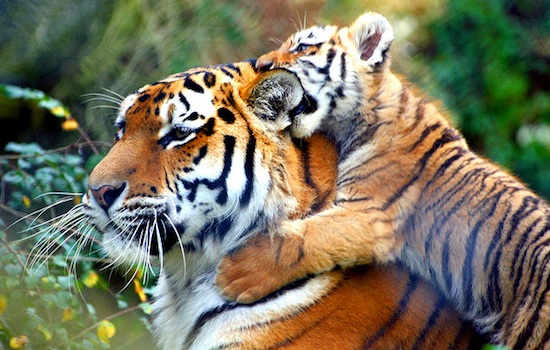 If you don’t think of “being exceedingly reasonable about scheduling matters” as a trait generally shown by big cats who chase down and eat small, fluffy things, you’re not alone. A group of tigers in Nepal, however, is demonstrating a degree of tact and diplomacy not usually seen in quarter-ton feline killing machines. The tigers of Nepal’s Chitwan National Park have changed from their normal daytime feeding habits to make their living as nocturnal predators, seemingly in the interest of avoiding conflict with the humans who call the area home and share many of the same roads and trails used by tigers.

Michigan State University researchers were surprised to find tigers and humans sharing the area so reasonably, as coexistence between people and tigers — solitary hunters that stake out miles upon miles of territory for their hunting grounds — was previously thought to be impossible, or at least extremely dangerous for all parties concerned.

Tigers are normally active at any given time of day, but over the last two years, Chitwan’s tigers have become much more active at night, transitioning to a mostly nocturnal life that doesn’t bring them into contact with humans in the area. Those humans, for their part, also avoid the forests where the tigers hunt at night, presumably because going into a dark forest filled with tigers is nobody’s idea of a fun way to spend an evening. When evening falls, Chitwan’s tigers take to the same paths through the forest trod just hours ago by humans.

The research, published in the Proceedings of the National Academy of Sciences, suggests that tigers can learn to share space and live in closer quarters with humans than once thought. That’s good news for the future of the species, which is native to densely populated areas and comes into regular contact with humans — often with tragic results.