The Mary Sue at TIFF: Black Mass and Sicario

Films Show Agents On the Wrong Side of the Law 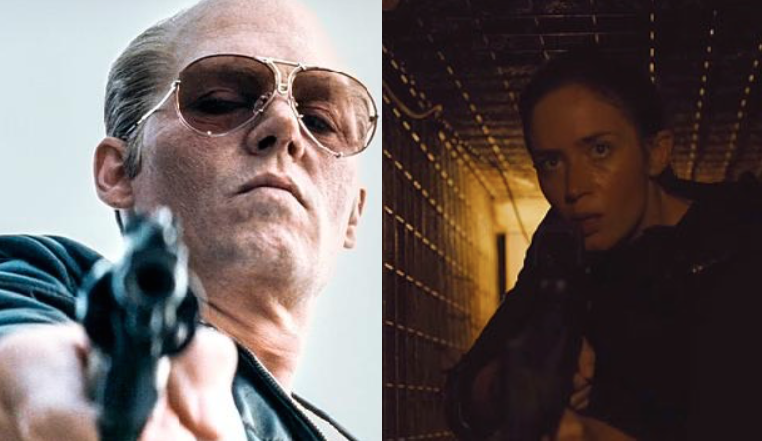 One of the odd things about film festivals is that you can literally be seeing the premiere of a movie in the city you travel to the same day you would if home. Both Black Mass and Sicario, the two big releases this week, premiered at the Toronto International Film Festival, essentially kick-starting “awards season.”

Even though September is a little early to even be considering Oscars (most of the titles considered most likely to be contenders don’t come out for another month or two), Sicario and Black Mass are certainly prestigious enough to garner some attention, if only in the acting categories. Ironically, the two films have a closer link than I originally expected, with both films focusing primarily on FBI agents working with the very people they should be bringing in.

Black Mass arguably features the best performance by Johnny Depp since his work in the late ’90s on Donnie Brasco (I like his Jack Sparrow but certainly don’t LOVE it). In that film he played the undercover FBI agent tasked with bringing down the mafia. In Black Mass, he plays the mobster working with FBI. Both are based on real people. And most importantly, both really do excel when it comes to showing not just the crime world and the law world, but how closely they intersect…and why one can be seduced by the other.

Johnny Depp is excellent in the role of Whitey Bulger, appropriately creepy as Bulger’s inclination towards intimidation and violence grow.  We’ve seen a lot of the violence and “mobster crew” scenes before (a lot of shooting people in cars and back of the head), and at a certain point that isn’t really the most compelling kind of action to watch. But what feels fresh and new are the connections and interactions between Bulger and FBI agent John Connolly (Joel Edgerton), who relishes the opportunity to put a known criminal to work for the FBI, if for no other reason than to stay a part of the “community” he is supposed to protect.

Community, and what is considered loyalty, is where the film breaks free of the crime dramas we’ve seen before. Both Depp and Edgerton are excellent in the film (although their exaggerated character design can be a little distracting). Most of the other character actors in the film (seemingly all white and mostly male) aren’t made up with such detail, and look more or less like themselves in non-specific period clothing (although Adam Scott does have a killer mustache). Although Depp is excellent in the film and Edgerton is a great actor, the best scenes are still probably those which focus more on the character actors. Corey Stoll, Kevin Bacon, Peter Sarsgaard, Rory Cochrane, David Harbour, Juno Temple, Julianne Nicholson and Benedict Cumberbatch (with his almost over-the-top Boston accent), each have at least one scene (usually opposite Depp) that is excellent. Sadly, although featured considerably in the trailer, Dakota Johnson might be the weak link in the film, but she is gone after the first act.

The film is clearly cut into three acts and skip large portions of these characters lives. The first focusese on Bulger and Connolly’s initial agreement to work together, the second on Bulger’s ultimate rise to power as an informant, and the third on his downfall. If I have one big issue with the film, it might be that director Scott Cooper, who seems to love to make movies that have a consistently under-lit general look, doesn’t alter the film’s look at all to coincide with the times. But that is a minor, petty complaint for a movie which is probably the director’s best and most consistent film to date. Sure, we’ve seen a lot of these types of stories before about gangsters, but this feels like a fresh take on the story and has a focus which will hopefully make audiences think about the thin line between the law and crime…and if that line can really be justified.

From street criminals in Boston, to international drug trading and murder, we have director Denis Villeneuve’s (Enemy, Prisoners) latest, another violent crime story. Emily Blunt plays FBI agent Kate Macy, who discovers a gruesome crime and is recruited to work as the liaison for the CIA by Josh Brolin’s agent, who also has a “consultant” of some kind (Benicio del Toro). Kate is immediately suspicious of working with a man who clearly seems to not be there with official jurisdiction, and even more suspicion when he finds out he’s from Columbia. The team is going into Mexico to find the drug cartel who runs the trade back and forth to America.

I will be honest…I didn’t understand a lot of what was going on this movie, or what the ultimate goal was. I really didn’t know what the “goal was” and, ironically, neither does Kate for most the movie (which is probably the point of her character). But it is also frustrating that with a character we’re told is so smart, tough, and tenacious, we don’t get to see her demonstrate those qualities very often in the movie. Once under the control of Brolin’s gum chewing character (who is right on the edge of ridiculous but avoided diving in), she is a pretty passive character, and it is her FBI partner Reggie (Daniel Kaluuya) that gets most of the info on her behalf. Kaluuya is a great actor and their partnership (which never becomes romantic) is nice, but Kate could have asked all the questions Reggie asks when he arrives…why doesn’t she?

Because of Del Toro, who is such a powerhouse and has an awesome sequence towards the end, it occasionally feels like the film sacrifices our lead’s character to showcase him. Blunt is good of course, but even a few more scenes of her in action, would have made the film a little more satisfying; as is, we are told about her accomplishments more than we see them. Along with the four leads, it is also nice to see Maximiliano Hernández (Marvel films) as a Mexican cop, and Victor Garber is always good as Kate’s boss.

But the biggest surprise is how great Villeneuve (and cinematographer Roger Deakins) make the movie look. Even if I was confused by the film’s narrative (which isn’t really a negative when a movie wants to have a twist), when the film is in action, you quickly know what they’re doing, where they are, and where they’re headed. The movie’s sound design is also remarkably well done, although everyone in my screening seemed a little jumpy during the gun fights. Although the film is extremely violent, Villeneuve clearly doesn’t want to make a movie which is “just” violent for the sake of thrills. The fights are gruesome and disturbing, and often emotionally effective. Just as Kate and Reggie are still physically offended by the sight of the horror, Villeneuve wants us to feel the same way…mission accomplished.

Interestingly, both Black Mass and Sicario are movies which seem to be at their very best when looking at the inner workings of these government agencies and the conflict these agents face. As procedurals, both films work, but it is far more about the connections these agents have to the people they have to deal with every day. Neither film is perfectly made and audiences who are turned off by violence (including domestic violence against women in both films) should probably stay away. But as films to kick off the prestige season, these movies are good examples of their genres.