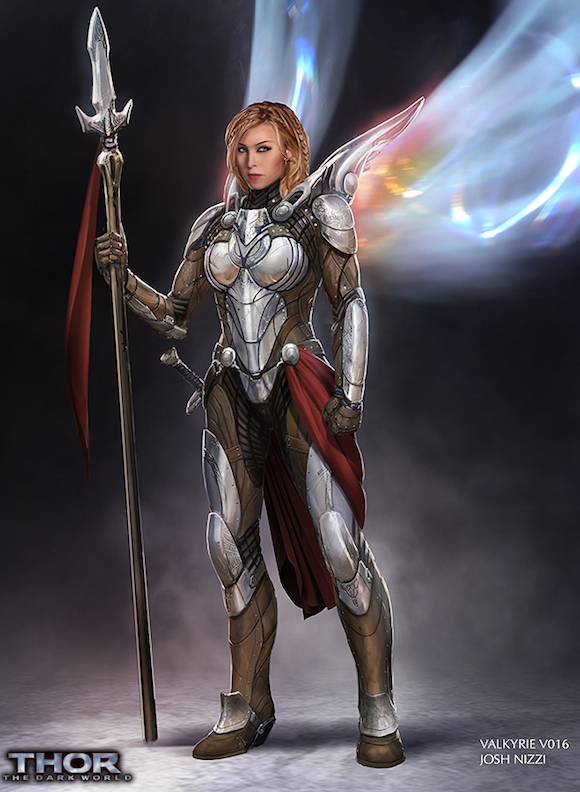 Concept Artist Josh Nizzi shared a number of unused art he produced for Thor: The Dark World, and among them are three progress shots of Valkyrie, or at the very least, a Valkyrie. While Vaklyrie is a superhero with a long history in the Marvel universe, and many incarnations within mortal women, she first appeared as about as literal a straw feminist as you can get: an pawn of the Enchantress created to divide the Avengers along gender lines by encouraging the Wasp, Medusa, Black Widow, and Scarlet Witch to embrace women’s lib. In retrospect, I assumed the issue would be kind of painful to read, but it turns out there’s no better response than laughter to the existence of a comic in which someone smashes through a window and yells “UP AGAINST THE WALL, MALE CHAUVINIST PIG” at the Hulk. That’s a line that’s really lost on any color of Hulk except perhaps this one.

It’s a pity Valkyrie (or a Valkyrie, or the Valkyries, I’m not picky) didn’t get her debut in The Dark World, but really the movie had enough on its plate already. Maybe next time. You can find two more pieces of concept art, including one with her winged horse Aragorn, at Nizzi’s page.