Marin Theatre Company is a well-known, well-respected regional theatre about 20 minutes north of San Francisco. I grew up just over the bay from Marin and always loved seeing plays there. The company is known for doing new and exciting work, staying current with theatre trends. They specifically choose works that engage their audiences and spark conversations. But black women theatre artists from the area have pointed out that the company is currently ignoring a conversation they very badly need to be having.

For weeks, protestors have been handing out flyers outside of MTC’s production of Thomas and Sally, a historically fictional imagining of the “relationship” between Thomas Jefferson and his slave, Sally Hemings, who gave birth to six of his children. The flyer (per the San Francisco Chronicle) reads, “Please help us put an end to harmful stereotypes; do not support this play or Marin Theatre Company. Ask for a refund and let Marin Theatre Company know why.”

In an open letter to the company, a group called Black Women’s Voices has laid out exactly why. The group, which describes themselves as “a community of African American/Black diasporic theater artists of varying cultural backgrounds, religions, sexual and gender identities, worldviews and artistic aesthetics” writes, “We are united in our belief that, from its very inception, Marin Theatre Company’s (MTC) current production of Thomas Bradshaw’s Thomas and Sally is an irresponsible, deeply harmful project with no accountability to black women and girls.”

They continue, “As black artists, and as black women, we are all too familiar with our histories and our narratives being imagined through the gaze of white supremacist patriarchy. We take issue with producing organizations whose choices perpetuate the notion that we are a voiceless, powerless group, incapable of understanding how we are being represented. We take issue with the dismissal of our concerns and the erasure of our country’s violent history.”

The play has received mixed reviews, with some raves and many criticisms. Some critics have insisted that it confronts the ugliness of slavery (if not the actual horrors), and that the framing of the play through the lens of two modern apparently white female college students (one of whom is a descendant of Hemings and Jefferson, both of whom open the play with a conversation about sharing a dildo) is a commentary on American racial identity. Now living halfway across the country, I haven’t seen the play, so I can’t say for sure what my opinion of these elements would be. (Although, having poured over numerous reviews, I feel pretty confident that I would not agree with the above praise.)

Either way, this letter makes it clear that Black women were left out of the conversation, and that’s inexcusable. During auditions and workshops for this world premiere production, their concerns were dismissed. In the company’s mission statement, they write, “We pursue a dialogue with our community that addresses our national and local concerns and interests and assists us in finding a new understanding of our lives.”

Yet, according to Black Women’s Voices, “Over the course of the performances which are still running, MTC has consistently responded to community questions or expressions of pain with either flippant or gas-lighting remarks on social media and worse, with silence.”

“Further, in response to peaceful protest ritual for Sally Hemings by Regina’s Door, a local group mixed with survivors of sex trafficking and artists, MTC called the police. Additionally, during these peaceful actions, MTC’s security staff verbally taunted and harassed protesters who have primarily been Black women.”

The biggest and possibly only concession the company has made was when they finally (if tacitly) admitted the shockingly poor taste of their promotional artwork. The original image featured Sally in the foreground, staring down the viewer with a seductive look. This play is historical fiction, but imagining Hemings–whom historians believe was 14 years old when she met Jefferson–as a grown woman capable of consent, let alone seduction, holding sexual or romantic power, is ludicrously offensive. 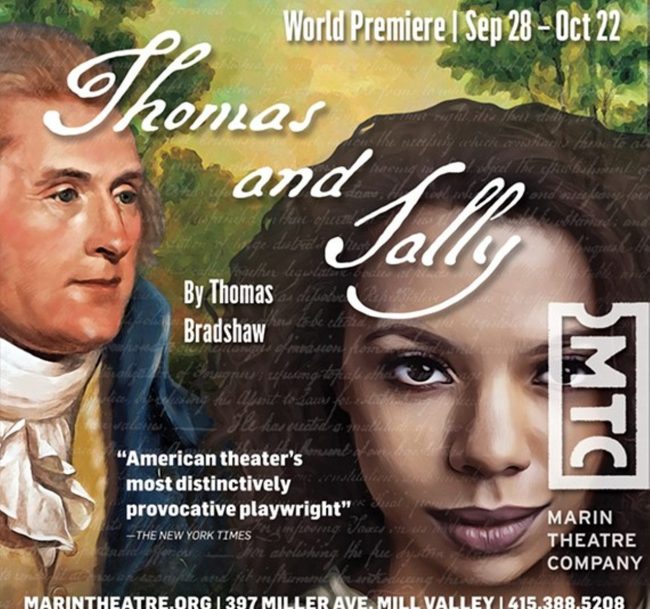 The company agreed to stop using the image in their promotions. They apparently didn’t think it worth the cost of printing new programs, though, so it remains there. They also refuse to listen to the women of color trying to explain how this plays into harmful, pervasive stereotypes about black female sexuality. In refusing to actually listen and engage, a half-removal of a picture reads as nothing more than tepid lip service.

The letter sets forth a number of steps the Marin Theatre Company could take to prove they’re actually interested in the community-engaging conversations they claim to be, from a basic apology to requiring staff and board members to undergo trainings in diversity and inclusion, as well as rape prevention/sexual safety/consent. They call on the theatre to put marginalized voices at the center of productions, “particularly those projects that attempt to explore our experiences and historical narratives.”

The letter ends with a call to action not just for MTC, but the larger, national theatre community.

This open letter serves not just as a recommendation for MTC but for other theater companies large and small moving forward. If MTC or any theater company across the nation wishes to create diverse works of art by telling Black or POC narratives, they must take responsibility for the messages they are promoting. Any theater institution across the nation who doesn’t have the resources to develop a piece by a person any systemically marginalized artist, should deeply consider whether continuing with the production is responsible.

Given the power of narrative and story to impact our nation’s decisions around juvenile and adult incarceration, police violence, continued violence against women and children and high rates of black women in human trafficking, we believe the stakes are too high for us to allow this to go on unchecked. We ask MTC to hold themselves accountable and we ask our national community to do the same.

The group has a meeting scheduled for today, Tuesday, October 24th, where they will talk to MTC staff about these issues. We’ll update this post as they release information. In the meantime, you can read the full letter here, and add your name in solidarity.