It's probably not what you're thinking. 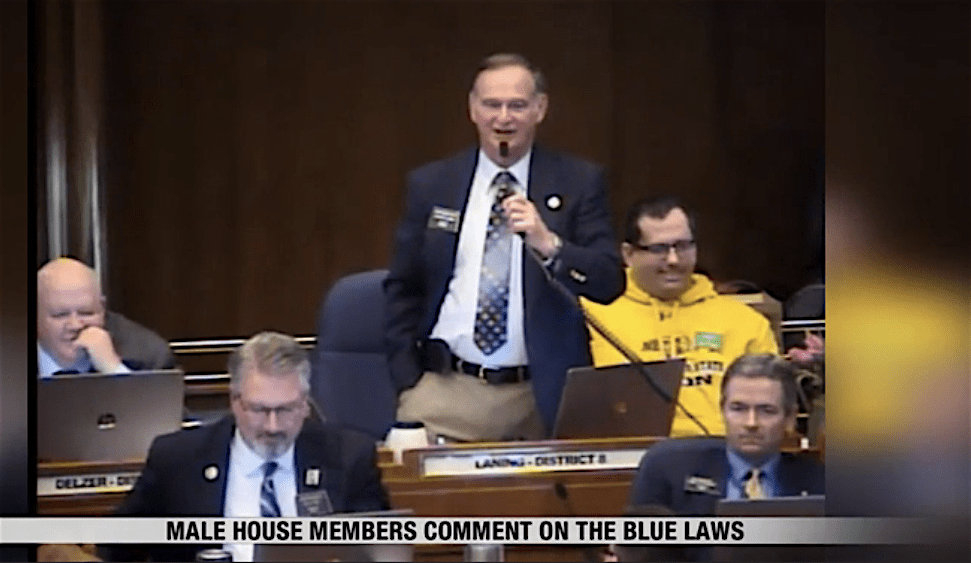 Growing up in my warm, soft, unapologetically liberal California bubble, here’s a thing I never knew existed: “Blue Laws.” If you’re also unaware that some parts of the United States exist outside of modern time, those are laws designed to uphold religious standards, that make it illegal to operate a business on a Sunday. Some Blue Laws only make it illegal to operate certain businesses (often involving the sale of alcohol), but others, like in North Dakota, extend to pretty much all operations in the whole state. There, nearly all businesses (with exceptions like hospitals and pharmacies) must remain closed from midnight to noon on Sundays. (Prior to 1967, that used to be midnight to midnight.)

It’s not surprising, then, that a lot of people want to get rid of these laws. They want to run their businesses and do their shopping on their terms and their schedules. (Not to mention that whole separation of church and state thing.) But a lot of lawmakers aren’t onboard. In North Dakota, lawmakers just voted against repealing the laws. And their reasoning for keeping the laws in place is… well, it’s not great.

The gist seems to be that these (male) lawmakers want to keep businesses closed so women will spend more time in the kitchen, and less time at Target.

“Spending time with your wife, your husband. Making him breakfast, bringing it to him in bed and then after that go take your kids for a walk,” says Representative Bernie Satrom.

Another feels his wife spends all his hard earned money the rest of the week and his wallet needs a day off. “I don’t know about you but my wife has no problem spending everything I earn in 6 and a half days. And I don’t think it hurts at all to have a half day off,” says Representative Vernon Laning.

Yup, according to these North Dakota lawmakers, those women, they be shopping too much. And rather than have these conversations within their own family, they’re opting to deny every person in the state the choice to spend their weekends as they see fit.

These are the people scared of Sharia law in the USA.We already have Sharia,they’re just called Blue Laws.And it’s NOT from Islam. #Puritans https://t.co/OacZD5QfQ1

And as an extra bonus, when Valley News Live drew public attention to these Representatives’ comments, they replied with predictable dismissive condescension. Laning told the outlet that he doesn’t get why people were so offended, but they probably “lack a sense of humor.”