Happy New Year! 🎉 Can you guess which Marvel characters made each of these resolutions? #NewYearsDay pic.twitter.com/DVTXeZqPm6

Marvel posted some unsigned New Year’s resolutions on behalf of their superheroes (and villains). Can you figure out who’s resolved to do what?

I’m Going to be the Mental Organism Designed Only for Kindness! Maybe.

My whole life is one giant failed New Years Resolution. Go away.

In 2018, I want to get bitten by a radioactive rich person.

I want to embiggen my time helping those in need!

You can check out the Twitter thread once you’ve made your guesses to see who fans have decided the resolutions belong to, or visit our comment section, since our readers will be quick to figure these out. As for the entire cast of characters involved in Avengers: Infinity War, I have a resolution for them all: stay alive to see 2019, please.

Happiest of New Years, Mary Suevians! What did you see today in 2018? 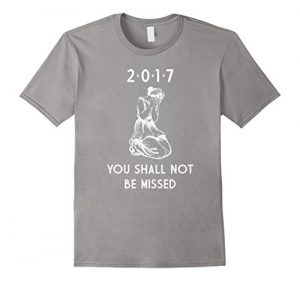 The only shirt I intend to wear for the rest of the year. (image credit)