A Cheatsheet for What the Infinity Stones Are In "Avengers: Infinity War" | The Mary Sue

Things We Saw Today: A Cheatsheet For What the Hell the Infinity Stones are in Infinity War

If you’re puzzled about the Infinity Stones, this might help! Movies they’re featured in, their containment devices, and who has them now. pic.twitter.com/gLquJlbzIT

If you’re not a big comics reader, it’s totally understandable that you might be wondering what all the fuss is about some colorful jewels and Thanos’ big gauntlet to collect ’em all. The Marvel movies have included and teased the powerful gems before, but Avengers: Infinity War is when they’ll really come into play.

The MCU has featured various Infinity Stones for many years now, but often indirectly—disguised in another object, embedded in an A.I.’s forehead, or straight-up unnamed. If you want a detailed breakdown of the Stones’ movie histories and the specifics of their unique powers, check out Collider’s Infinity Stones explainer or the Marvel Cinematic Universe wikia page, which I refer to when I need to jog my memory about this Stone or that. For a quick recounting of their origin in comics in 1972, when they were called “soul stones,” the Verge has got your back. 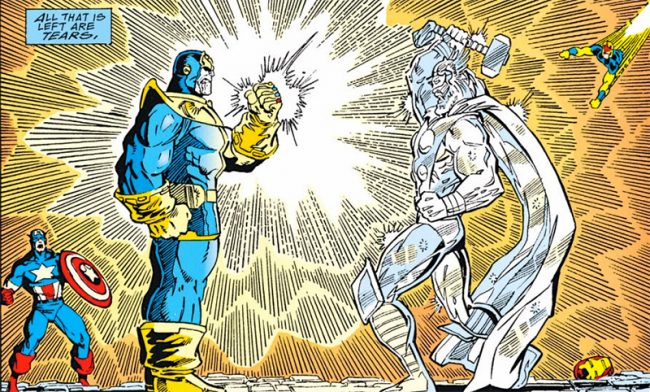 TL;DR: Thanos, the Mad Titan—a big ol’ bad guy from the suburbs of Saturn—needs all of the stones, which feature unique, reality-altering properties, in order to make his fetching gold Infinity Gauntlet extra-special, and gain the ultimate ability to manipulate, uh, everything you can possibly conceive of manipulating. The sky won’t even be the limit if the fully-powered Infinity Gauntlet is a go. 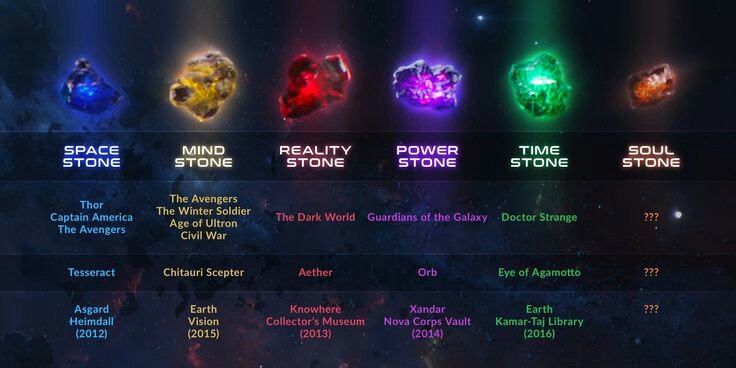 This is all still a lot of stones to keep track of—as well as remember where we saw them before and who has them now—so I loved this quick and easy visual guide, originally created to help sort out the stones by illustrator Louie Mantia in 2016. The guide shows us what movies the stones have popped up in, which items they inhabited, and where they were last seen. Of course, a few things have changed since 2016—like Loki snagging the Tesseract from Odin’s vault in Thor: Ragnarok—but this is still an excellent place to start. Print it out and keep a copy in your wallet! I know I will. What? I like to be prepared.

Anyway, if there’s one thing to remember about the Infinity Stones, it’s that we really, really don’t want to hear Thanos say, “By your powers combined …”

And today in non-Infinity War news (I know, I was also surprised that anything else happened):

That’s it from us—what reality did you manipulate today?