Things We Saw Today: The Golden Girls Are Getting Their Own Edition of “Clue”

It was Dorothy in the kitchen with the cheesecake and the lipstick. 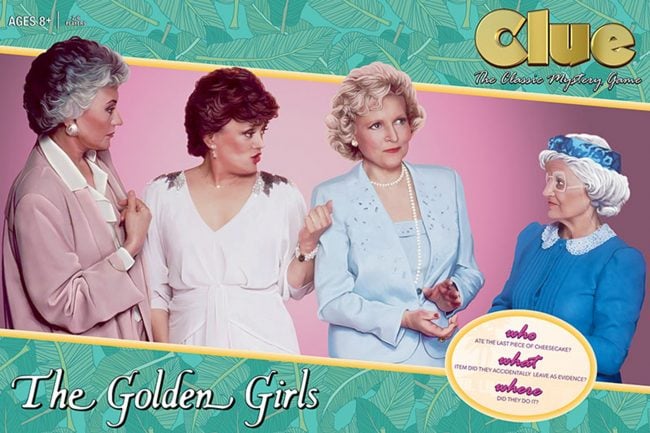 Instead of solving a murder, the Golden Girls “Clue” will see players trying to figure out who ate the last piece of cheesecake, and what incriminating item they left behind while doing so. (Yes, really.)

Nostalgia for the great Golden Girls has never been higher, as evidenced by plans for their “Clue” game, as well as a similarly-themed “Monopoly” edition due out later this summer. For “Clue,” you can play as Rose, Dorothy, Sophia, Blanche, or two “mystery men,” and the item tokens replacing our well-known candlestick, revolver, knife etc. are as follows:

That’s “a can of hairspray, a bathrobe, Sophia’s purse, a lipstick, a chair, and a high heel.” I love “Clue,” but it’s been a while since I’ve played. This seems like a fun game to have around for parties—and I think many of us know someone who would love this as a present. What do you think? Is this pop culture nostalgia gone too far, or just right? (via EW, images: USAopoly )

So what’d you see today, people who are definitely not Supreme Leader Snoke?