Which Chris Should Win the 2017 Chris Crown? | The Mary Sue

Things We Saw Today: Which Chris Should Win the 2017 Chris Crown? 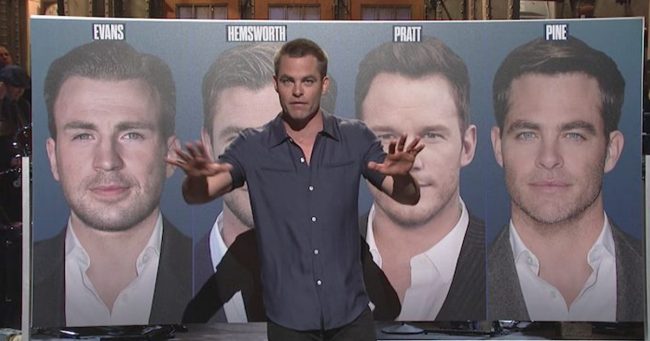 Hollywood has four golden Chrises who all star in superhero films, are all “jacked, but in a sweet way,” per Kate McKinnon, and all had pretty damn big years. But which Chris will ultimately come out on top?

Over at SYFY Fangrrls, Kayleigh Donaldson offers us an in-depth, highly scientific dive into ranking the Chrises—that’d be Pine, Hemsworth, Evans, and Pratt—using such metrics as “geek world cred,” “social media excitement,” and “thirst trap.” The article determines that in the end Hemsworth squeaks past Evans to be crowned the Chris King of 2017, but it’s a lot of fun to read how they get there.

As a person who has seen Thor: Ragnarok four times in theaters (it’s a good movie, okay, I’m fine) I highly agree with Fangrrls’ choice, although Evans’ social media presence as Actual Captain America in this wretched political hellhole of a year and Pine’s turn as Steve Trevor in Wonder Woman, which made me cry real tears, made this a tight race. Chris Pratt was there too, Star Lording it up, although he was also in Passengers, so.

As you go into your holiday weekend, do take Chris Pine’s SNL monologue, in which he sings about the Chrises to the tune of Billy Joel’s “Uptown Girl,” to warm you on those cold winter nights.

Do you agree with which Chris was crowned?