Following Michelle Obama, Statue of Liberty Protester Therese Patricia Okoumou Says “I Went as High as I Could” 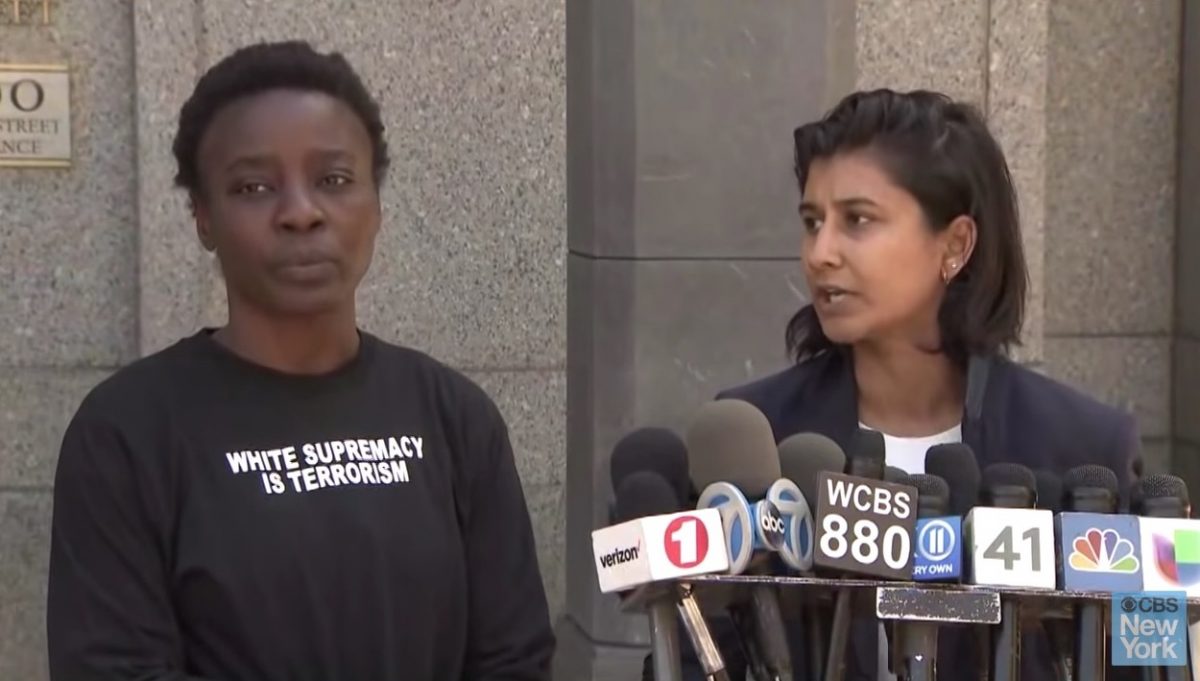 By now, you’ve probably seen the images of Therese Patricia Okoumou climbing the base of the Statue of Liberty. Okoumou’s July 4th protest against I.C.E. and the US administration’s immigration policies ended with her arrest. If convicted, she will face prison.

Okoumou was part of the Rise and Resist members who had hung an “Abolish I.C.E.” banner from the statue earlier in the day and decided to climb the statue independently of the group. With her lawyer Rhiya Trivedi, Okoumou spoke outside a New York courthouse about her status as a naturalized United States citizen from the Democratic Republic of Congo and the goals of her protest. Trivedi introduced Okoumou:

“There are times when justice demands that we transcend the law. I can think of no better time than the fourth of July, nor no better way to draw attention to the violence that is being done in the name of borders than to physically transcend those hallowed words at the base of the Statue of Liberty: Give me your tired, your poor, your huddled masses.

Okoumou, wearing a “White Supremacy Is Terrorism” shirt, spoke about her protest, saying “Michelle Obama, our beloved First Lady that I care about so much, said when they go low, we go high. And I went as high as I could.” She continues:

“Trump has ripped this country apart. It is depressing. It is outrageous. I can say a lot of things about this monster, but I will stop at this: his draconian zero-tolerance policy has to go. In a democracy we do not rip children—we do not put children in cages, period. There is no debating it. Nothing you can say to me will justify putting children in cages. Only a stupid, unintelligent coward and insecure—I will add, a maniac—will rip a tender-aged child from its mother. Reunite the children now.”

Trump, at a rally in Great Falls, Montana, called Okoumou a “clown” and praised the Park Police for getting her down safely. “I wouldn’t have done it,” said the President, “I would have said, ‘Let’s get some nets, and let’s wait till she comes down. Just get some nets.'” (Note: What? Why can’t he just say they did a good job, which Okoumou also did by thanking the Park Police in her speech? Why does he have to add that HE WOULD HAVE JUST LET HER JUMP!? Nets?!)

Okoumou remained silent after someone asked about how she felt about people who “saved their money” to visit the statue not being able to due to her protest. Trivedi answered, saying, “Hopefully they know that there are people out there like Patricia … trying to protect their civil liberties, which I would have faith that they treasure more than a trip to the Statue of Liberty.”

(Yes, civil liberties over a tourist trip/photo op any day.)