There Will Be… D-Dinosaurs? In, Uh, Your Jurassic Park Comic? 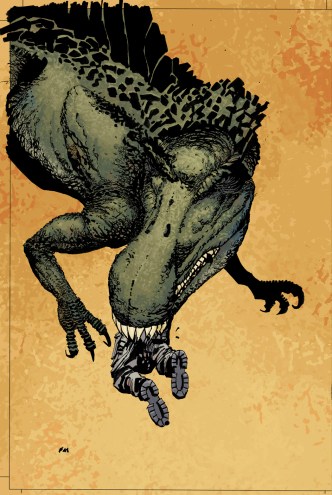 To the joy of every fan who’s still sort of hoping for a Jurassic Park IV (10 years ago I heard there was going to be a Velociraptor/ motorcycle chase and have clung to the idea ever since) IDW Publishing has announced that they will have a new Jurassic Park based comic series starting up in June.

The title is Jurassic Park: Redemption, and I can’t decide if that’s more awesome than it is hilarious, or more hilarious than it is awesome.

The first story arc of the series will be 5 issues long, written by Bob Schreck with art by Nate Van Dyke.  Frank Miller‘s cover for issue #1 (left) has already been drawn.

Jurassic Park: Redemption, takes up thirteen years after the very first Jurassic Park motion picture and finds John Hammond’s grandchildren, Tim and Lex Murphy, as well-to-do young adults. While Lex is working with the UN to continue keeping people off of both Isla Nublar and Isla Sorna — her brother Tim has other ideas about how to get their grandfather’s name back in good standing.

Jurassic Park, Darkwing Duck, Ducktales, and Batman Beyond?  My childhood is coming back in COMIC BOOK FORM.