Let’s Get Dangerous: Darkwing Duck is Back 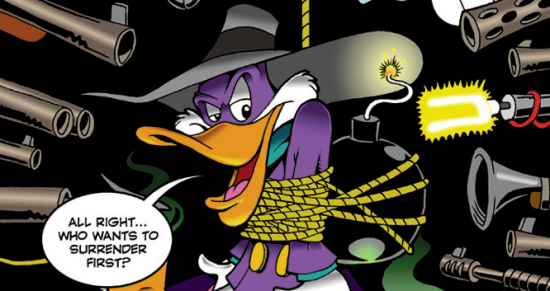 Nostalgia warning: Darkwing Duck is back this June.  BOOM! Studios, who already publish numerous Disney character comics through their BOOM Kids! imprint, are bringing the terror that flaps in the night back in a four-issue miniseries beginning in June.  The announcement was made yesterday at the Emerald City Comic Con.

Ian Brill, writer on the miniseries, promises lots of villains:

“Darkwing has such a great rogue’s gallery, I couldn’t pick just one. By the time you get to the end of the first issue you’ll see four, and then there are only going to be more as the series progresses. All the villains’ lives have been changed, too. There have been big changes in St. Canard and everyone’s dealing with them in their own way. This series has the familiar characters you want but given new situations that we hope gives a sense of vitality to the stories.”

If you need a refresher course, or even just a regular course, TVTropes has you covered:

Darkwing Duck was a superhero cartoon produced by Disney that ran from 1991 to 1995. It followed the adventures of a masked duck, who was somewhere between Batman, Sandman and The Shadow, parodying many superheroic tropes and characters along the way. Nevertheless, it was one of Disney’s Darker And Edgier series, fondly remembered for things like total aversion of Never Say Die and an episode featuring Satan as the Monster Of The Week…

Darkwing was comedically inept, hampered by his vainglory, short-sightedness, bad temper and general klutziness. He always came through in the end, usually after being brought to his senses, and uttering the phrase, “Let’s get dangerous,” after which he’d really show his true skills. His other catch phrase “I am the terror…” changed endings every time it was used.

Darkwing Duck also has the honor of being a TvTropes Trope Namer.  Man, I wish we’d had the Disney channel when I was a kid.