The Zombie Research Society Is Real, and There Is a Chapter In New Jersey 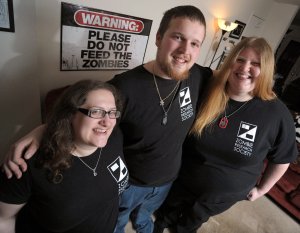 In case you live in the New York tri-state area and you are concerned about the region’s preparedness in case of a zombie apocalypse, worry no more — the Hackettstown chapter of the Zombie Research Society is on it like vomit. But also, they actually exist, and are available to answer your questions. There are currently only three members of this chapter, but at least their newfound existence has given us a good reason to tell you about other chapters across the country. So, zombie buffs and tinfoil-hat-wearers alike now have something fun to talk about — if you know it’s fake, because, as we all know, zombies are not real. (I’m talking to you, tinfoil-hat-wearers.)

As something like this is wont to do, this all began while three friends — Colleen O’Neill, Bella Rosen, and Matt Mitchell — were watching a TV show. No, that show was not The Walking Dead (but they do count themselves as fans). But the show in question did feature author and creator of the Zombie Research Society Matt Mogk, and when the trio learned that such a society existed, they immediately started setting up a local chapter. Why? Because Hackettstown was lacking a chapter of the Zombie Research Society, duh.

The mission of the ZRS is the dedication to “the serious study of zombie science, survival, and pop culture.” That last item shows you that this whole thing really is more tongue-in-cheek than a group of people who really believe in an impending zombie apocalypse. On the site, you will find posts about the Center for Disease Control and what they’re doing about the zombie threat, zombie snails, symptoms, methods of escaping as well as killing zombies, and new books about zombies. On the illustrious advisory board? George Romero, Dr. Steven Schlozman (The Zombie Autopsies), and infectious disease epidemiologist Dr. Tara Smith, among several other authors and academics.

And it’s all for pure, good fun. However, O’Neill, the president of the Hackettstown chapter, says that while this is all for kicks, it still might serve them and others well in the face of different kinds of danger:

The Hackettstown chapter was formed in November, and at their first open meeting, which took place earlier this month, 20 people showed up. The topic at hand? The movie Zombieland. No, they aren’t going to be forming a band of survivors or building a bunker (just in case). They just like to hang out with “like-minded people.” But the ZRS doesn’t mess around:

As part of the group’s initiation, the chapter must complete research projects that have a zombie theme but are meant to promote the common good.

The group will visit the gun range to learn how to safely handle common fire arms. Another idea is to host a nurse to lecture on blood-borne pathogens.

And this is part of the real-life preparedness element of the ZRS. Sure, they’ll hold a debate on sprinting zombies vs. slow zombies. But they really are aiming to help people in case of an actual emergency, like a disease outbreak.

So, I’m going to see if there’s a chapter in my area.