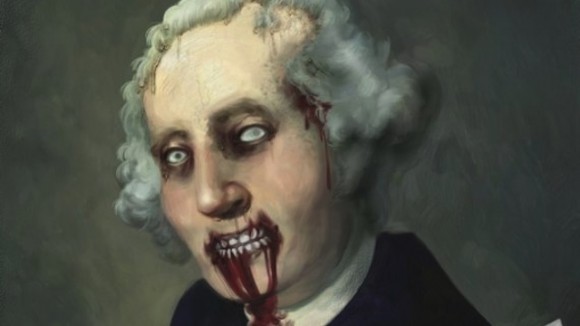 After George Washington passed away following a bout with a nasty cold, the guy who designed the Capitol Building — who was also a practicing physician — had the brilliant idea to hold off on the burial, inject the corpse of the first President of the United States with lamb’s blood, and bring him back to life. This is the story of William Thornton and his crazy plot to become a real-life American version of Dr. Frankenstein. Of course we had to cover this.

Hero Lauren Davis at io9 found this story by way of the book Blood Work: A Tale of Medicine and Murder in the Scientific Revolution by Holly Tucker. And our lives are all better for it. Here is the 18th Century scoop, and how George Washington almost became the Walt Disney of his day against his will:

After exhausting every possible counterproductive measure — repeated bleeding, plus the continuous evacuation of his stomach and bowels — to save Washington’s life after he took ill (which occurred after the president took a ride on horseback on a rainy, wintery day), the man who led the American Revolution turned to his doctors and said, “I die hard, but I am not afraid to go.” And then he died. His body was put on ice to preserve it until three days had passed, at which point, he would be placed in the family vault. Washington was very afraid of being buried alive, you see. This will become a tiny bit ironic very shortly.

Then William Thornton showed up, a guest of Washington’s step-granddaughter, Elizabeth Law. Despite Washington’s wish to be buried like a normal dead person, Thornton thought it might be a good time to try a little experiment. Because, you know, it’s not like Washington was going to mind. His plan?

Thornton told Washington’s wife Martha that he wanted to thaw Washington’s body by the fire and have it rubbed vigorously with blankets. Then he planned to perform a tracheotomy so he could insert a bellows into Washington’s throat and pump his lungs full of air, and finally to give Washington an infusion of lamb’s blood.

Why lamb’s blood? Because according to other mad scientists-slash-practicing physicians in the 17th and 18th centuries, it was thought to contain “special properties” that can bring the dead back to life. This was, apparently, all the rage back then, when blood transfusions were first discovered to have an invigorating effect on an ailing human body. (Which makes perfect sense after all those liters of “diseased” blood are drained. Out with the bad in with the good!) Many doctors coming out of the University of Edinburgh were conducting research on this, including Thornton. (Not necessarily with lamb’s blood, though. And not with the intent to bring dead people back to life.) The university may have even been at the forefront of transfusion in medicine.

Needless to say, Washington’s family declined the architect-slash-doctor’s offer to reanimate the late president, and the unabused corpse was peacefully laid to rest at Mount Vernon. Not in the vault that Thornton was kind enough to work into the design of the Capitol building, just for him. Probably because of the whole “Let me turn him into a zombie” thing.