The Women of Black Widow Have an Accountability Problem

The standalone film stumbles when it pulls its punches. 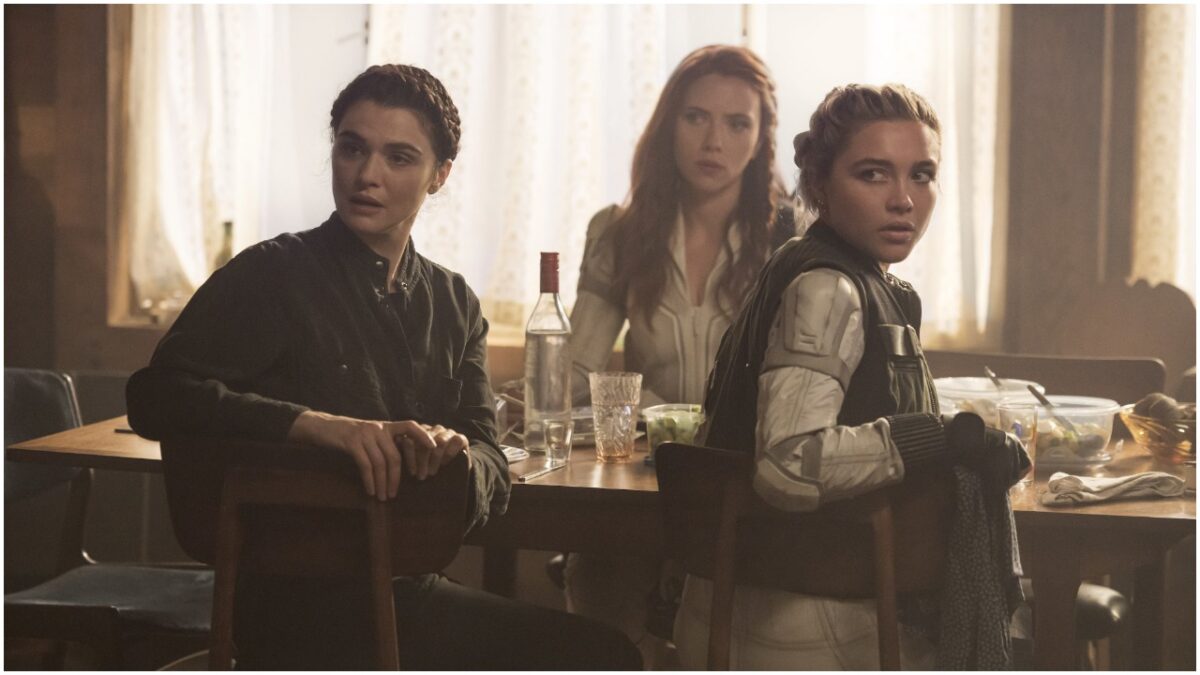 Marvel’s Black Widow hit theaters and Disney+ yesterday, wrapping up Scarlett Johansson’s tenure as the MCU’s first (and for a long time only) female Avenger. The film is a very entertaining spy caper, complete with strong performances from its cast, kinetic fight sequences, and a satisfying ending to Natasha Romanoff’s run. I enjoyed the film very much, but I keep coming back to its issues of accountability, especially with regards to Natasha herself.

Natasha Romanoff has always been a morally ambiguous character, comfortably operating in the grey areas of the MCU. The reformed Russian spy and assassin was recruited into S.H.I.E.L.D. by Clint Barton/Hawkeye, where she worked tirelessly to write her wrongs. Or as she put it in The Avengers, “I’ve got red on my ledger. I’d like to wipe it out.”

High on that red list is her revenge mission in Budapest, which has been hinted at throughout the MCU but is finally explained in Black Widow. Clint and Natasha bombed a building to kill General Dreykov (Ray Winstone), who oversaw the Red Room. In addition to Dreykov, they also bombed his daughter Antonia. Intentionally killing a child is pretty dark, especially for a family-friendly brand like Marvel/Disney.

But of course, Natasha’s guilt is largely unfounded. Not only did Dreykov survive, but so did Antonia. Unfortunately for her, her father quickly enrolled her in the Red Room, turning his daughter into a brainwashed uber-assassin, complete with experimental enhancements. So not only did Natasha not kill Antonia; in the end she liberates her and the rest of the Widows from their chemically-induced brainwashing.

It’s a convenient rewriting of Black Widow’s past that absolves her of the guilt she’s been carrying all these years. But this revelation makes Natasha less compelling, not more. Of course, the Avengers have left plenty of casualties in their wake, an issue that dominated Captain America: Civil War. But absolving Natasha of her greatest sin only undercuts her journey towards redemption.

Issues of redemption also plague Natasha’s surrogate mother, Melina Vostokoff (Rachel Weisz). If there’s a villain to rival Dreykov, it’s surely her: a brilliant scientist who invented the chemical mind control compound used on the Widows, including Yelena (Florence Pugh). Melina, who lives a quiet life on a pig farm/lab, is shocked to see her faux family track her down. She demonstrates the mind control capabilities by ordering one of her hogs to stop breathing.

Later, Melina tells Natasha, “I was cycled through the Red Room four times before you were even born. Those walls are all I know. I was never given a choice.” Natasha responds, “you were born in a cage, it’s not your fault.” Yet Melina continues to live her own life, seemingly free of outside influence. If she’s not under chemical mind control, then why is she so loyal to Dreykov? Shouldn’t she be held accountable for chemically brainwashing countless women soldiers?

Of course, Melina earns redemption by helping her family take down the Red Room and Dreykov. And perhaps there was more to her journey that didn’t make it into the final cut of the film. It’s a shame, because Rachel Weisz is a talented actor and Melina is clearly a complicated character. One wonders why the film spent so much time setting up Alexei (David Harbour), the brawns of the operation, as opposed to Melina, its brain.

It would be more satisfying if Melina had engineered the Red Dust antidote to the mind control. But we never find out who made the antidote or where it came from, only that Yelena got it from a rogue Widow. The film largely glosses over Melina’s misdeeds once she joins up with her family, but you would think that Natasha and Yelena (who again, was under Melina’s brainwashing) would be more angry at their mother for robbing countless Widows of their free will. It’s a cognitive dissonance that just doesn’t jibe with the rest of the film.

We don’t yet know if we’ll see either Alexei or Melina in future MCU projects. Yelena will return in the Hawkeye series, where she will go after Clint Barton on the orders of La Contessa Valentina Allegra de la Fontaine (Julia Louis-Dreyfus). And like her sister before her, Clint will presumably invite Yelena to join S.H.I.E.L.D./the Avengers 2.0.

What did you think of Black Widow‘s treatment of accountability? Did Melina ultimately redeem herself or does she still have much to answer for?