Some years back, while we played Left 4 Dead, my friend Greg told me his idea for a truly scary zombie game. Don’t make it a shooter, he said. No magical first aid kits, no weapons but found objects. Find food. Hide. Fight back if you can, but only if you have no other option. Otherwise, your goal is to stay as far away as possible, and to not starve to death in the process.

The protagonist, he said, should be a kid. Ten, maybe eleven years old.

To my regret, I did not ask my friend for winning lottery numbers that day. The game he unknowingly described, The Walking Dead: Season Two, released its first episode earlier this week. As he had predicted, it is one of the scariest, tensest, most gut-wrenching games out there.

And it is so very good.

I had no end of praise for last year’s The Walking Dead, which broke my heart in a hundred ways and left me begging for more. In the wake of that, I found myself both excited and apprehensive for this week’s release. The Walking Dead was an unexpected, unparalleled success, with more Game of the Year awards than I can count. That’s not an easy act to follow, especially since the game’s hallmark was emotional impact. I was concerned that an attempt to replicate that might result in melodrama, a concern underscored by the choice of protagonist. Clementine was the driving force of the first game, the moral compass, the part of the world worth saving. A story about a man trying to protect his de facto daughter from a world gone wrong is one thing. Throwing her into that world alone is quite another. I was wary of two opposing outcomes: that playing a child in such harsh surroundings would feel overly sensational, or that said surroundings would be dumbed down in the presence of a ten-year-old leading lady. None of that slowed the speed at which I pre-ordered, but I knew that achieving the sweet spot in between those two points would be no easy task.

Yeah. I had nothing to worry about.

I cannot say much about the story of Episode One: All That Remains without spoiling things, but like its predecessor, it somehow manages subtlety in the face of rampant brutality. Violence is not the point of this story. It’s the impetus, not the crux. Rather than setting up cheap, maudlin thrills, All That Remains uses violence as a foundation for more nuanced dramas about deceptively mundane things: a backpack, a can of beans, a need for bandages. As deftly written as the dialogue is, some of the most powerful moments are fueled by things left unsaid. One early sucker punch comes through nothing more than a change in a character’s appearance. It’s never explained. It’s never mentioned. I didn’t need it to be. Its quiet inclusion was enough to knock the air out of my lungs. I felt a pang of grief in that moment, all from a few shifted pixels.

Playing a ten-year-old girl in a world like that is one of the boldest things I’ve seen a game attempt, let alone pull off. Clementine is recognizable as the kid I knew in the first season — bright, inquisitive, a bit shy — but she’s changed. Or more accurately, she’s changing. She’s taller than she was in the first game. Her voice is a little lower. She carries a gun. There is a palpable gravity to her, a sadness that I doubt will fade. She knows death, and loss, and how to do things with a pocket knife that I definitely don’t. But she’s still a kid, growing and learning. When she says reassuring things like, “Might as well look, you never know,” when scavenging a campsite, there’s something in her tone that suggests that though this is a lesson she knows by heart, she’s copying words she’s heard an adult say. Her dialogue choices reflect her state of transition, offering phrases that suggest hardness, compassion, curiosity, pragmatism, hope. These didn’t feel like mere roleplaying decisions. They felt like a question of which human traits I thought should endure.

Naturally, Clementine’s physical abilities are as limited as her cognitive ones. For an adult, picking up a small log and bashing a walker’s head in would be an act of will. It’s every bit as scary for Clementine, but there’s the additional fact that she weighs about seventy pounds. And it’s not as if she only has dimwitted zombies to worry about. She can’t outrun a grown adult. She can’t prevent one of them from picking her up. The deck is thoroughly stacked against her. 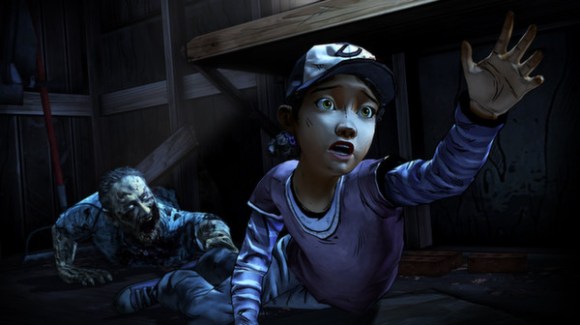 While such limitations might suggest that the player feels disempowered, I found myself loving Clementine because of them. I was reminded, oddly enough, of the new Tomb Raider, in which Lara’s expressions of fear were what cemented my belief in her courage. Same holds true for Clementine, who feels all the braver for her average abilities and finite stamina. Her fear, her hunger, her loneliness — those most basic human vulnerabilities were what drew me in. Playing through a survival situation as a kid could’ve felt like a stretch, but the key is that Clementine is neither helpless nor overpowered. She is not too wise or clever for her age. She is not ingratiatingly charming. She’s a smart, likable, believable kid, made real through some of the best writing and voice acting in games today. If the rest of Season Two is on par with All That Remains, Clementine is on track to become one of the most admirable heroines I’ve ever played.

As I found in Telltale Games’ previous release, The Wolf Among Us, traditional point-and-click puzzles have been pared down in favor of more simple solutions. I like the boon this grants to pacing, though I did slightly miss having as much stuff to poke around in. Combat sequences are the same easy press-Q-when-prompted affairs as in the first game. No real challenge, but it kept me feeling involved. Just like before, the simplicity of the gameplay did not hinder my sense of engagement. The game’s that good.

A few points for those who plan on picking this up:

There are still four episodes ahead, so don’t go in expecting a big payoff. This episode spends almost all of its character development time on Clementine (probably rightly so, though we’ll see). There are a lot of people I don’t feel invested in yet. But again — we’ve just left the starting gate. I think that’s entirely fair.

If you haven’t played last year’s game yet (or 400 Days, the interim DLC), you need to. Season Two will randomize game choices for you if it can’t find a previous save, but aside from that being no fun at all, Clementine’s story will lack some punch if you don’t know how she got this far. Trust me. It’s worth the time.

And on the off-chance that this isn’t abundantly clear — this is a graphically violent game starring a young child. It is tough to get through. There were scenes I found physically difficult to watch (I am nothing if not squeamish), but the quality of this series is such that the horror has yet to alienate me. So yes, you will see bad, bloody things happening to a grade schooler, and yes, she can die. But the death scenes are mercifully short, almost clinical in their portrayal. Like everything else in the game, each instance of violence that Clementine encounters feels carefully measured. I found none of it to be in poor taste. Still, you should know what you’re in for.

A thought has occurred to me on the subject of choice. When I wrote about the first game, I commented that every choice I made for Lee was what I thought was best for Clementine. The same is still true, but my motivation has changed. I’m no longer protecting her. I’m helping her grow. I want her to know that she can survive, that she will grow up, that she can be strong. That she is strong already. There is a part of me that wants nothing more than to bundle her up and give her hot cocoa and keep the monsters at bay. But that’s not what she needs. Clementine is no longer the little girl who climbed down from her treehouse, clutching a hammer without knowing what to do with it. She knows what a hammer is for now. And though I think she’s tough enough to make it down this road without me, I’m so glad to be on this journey with her.