The Walking Dead Recap: “Them” 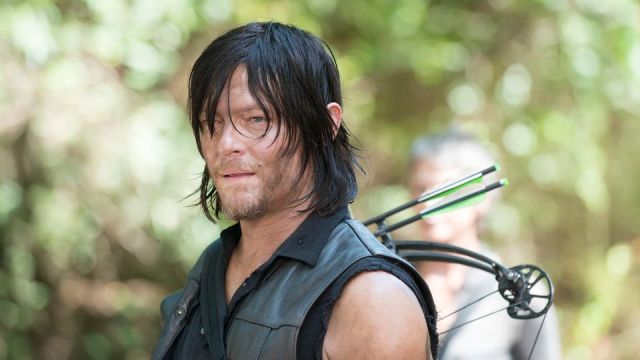 As always, this recap contains spoilers, so if you aren’t caught up on The Walking Dead, turn back now!

The last two episodes have been pretty brutal and we were, mercifully, offered a bit of respite from the show’s new favorite hobby of killing off major characters. This week also offered us one of the best character-focused episodes we’ve had in quite some time.

As the group treks off to Washington D.C., they find themselves fighting off one of the zombie apocalypse’s most relentless villains: the elements. As the group trudges forward, they start to cower under the lack of water and relentless heat. This, paired with the fresh losses of Beth and Tyreese proves to be enough to nearly break the group, especially Daryl, Maggie, Noah, and Sasha. Of course, because this is The Walking Dead, the stakes are a bit higher because while they march, the group is also trailed by a herd of even slower walkers. The group has a choice, press on and hope the walkers trail off or die and they can find water, or they can stop, face the walkers–walkers which will most likely overpower them–head-on.

It’s kind of the theme hovering over the entire episode, the choice to survive. The group is forced to daily decide if they want to press forward in search for something better, or face the threat pressing on them in that moment until it ultimately overpowers them. By going to D.C. to find whatever might be there is Rick and the rest of the group choosing to continue to search for something better.

Of course, not everyone in the group was so optimistic. Noah was crumbling under the weight of sorrow and guilt he felt after Tyreese’s death, even confiding in Sasha that he was unsure if he could continue to press on. Daryl is destroyed after losing Beth, sneaking off from the group to mourn, sneak in the ever-tragic Daryl tears, and burn himself with a cigarette. You know, normal sad guy stuff.

While a sad Daryl is always a tragedy, the real soul-crusher came from Maggie and Sasha as they tried to work through the loss of their siblings (and don’t forget, Sasha is still mourning Bob). Both of them are heartbroken and destroyed, and both of them are finding it harder and harder to continue on. Sasha shows this by recklessly travelling headlong into throngs of walkers, and Maggie essentially shuts down any sort of emotions and her usual instincts. She even finds herself unable to put down a walker when she discovers the grisly scene of a bound and gagged walker in the trunk of a car.

Finally, it begins to rain. Of course, just as the group starts to enjoy the rain, it quickly morphs into a powerful storm, causing the group to take shelter in a nearby barn. When a herd of walkers tries to force their way into the barn, it is Maggie, Daryl, and Sasha who are the first to jump up and try to keep the herd at bay. Of course, they aren’t able to keep away the flood by themselves, but the rest of the group wakes and joins in on the fight. It’s a hard fight, but they are able to keep one another safe.

Obvious metaphor? Sure, but it was still great.

The next morning, Maggie and Sasha go out to survey the damage, finding several uprooted trees and lots of walkers killed or impaled in that classic, Walking Dead gore fashion. As they walk around the area, the two share a pretty sweet moment, acknowledging one another’s loss, one another’s pain, but encouraging each other to move forward. Moving on in this world is hard, but they have to keep going. Despite everything, there is still hope, and there are still things worth fighting for.

Of course, nice moments don’t last long on this show. Just as they are finally laughing for the first time in ages, a super clean-cut man named Aaron, walks up. He claims to be a friend, asks to speak to the leader, and knows Rick’s name. While on the road the group had stumbled across a small pile of water bottles with an attached note that read “from a friend”, so it stands to reason that Aaron was behind that as well. The internet has been buzzing over the introduction of Aaron on the show, so it will be interesting to see how closely the show sticks to the Aaron storyline from the comics. As someone who is pretty unfamiliar with them, I’m very interested to see what Aaron is going to mean for the group.

Also, I’ll just say it: I’m really ready to see Morgan again, and I’m curious if he is connected to Aaron. There aren’t too many episodes left in this season, and I’m definitely ready to figure out what is up with Morgan (and now Aaron).

What did you think of this week’s episode? Are you a fan of the character-focused episodes, or do you prefer action-centered episodes? What do you think about Aaron? Let me know in the comments!