Carol’s Growth, Daryl’s Sexuality, and Negan’s Ruthlessness: What We Saw at The Walking Dead Panel at NYCC 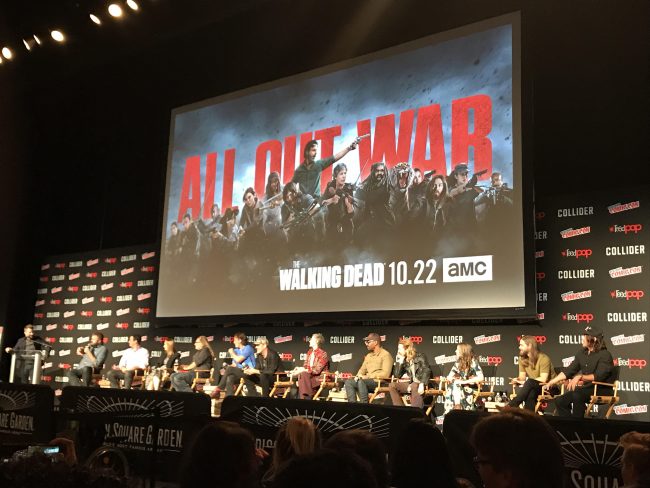 New York Comic Con (or as I like to call it, Nerd Church) is undoubtedly one of the best places to be for a Walking Dead superfan: just as the long hiatus between seasons is coming to a close, fans are blessed with the panel that always includes the majority of the cast as well as sneak peeks of the season that is yet to come.

This year’s panel did not disappoint—totally worth the hours spent in Madison Square Garden (and the $12.00 spent on two bottles of Dasani).

After airing some footage from the past seven seasons spliced together into a nostalgic montage that elicited a loud, enthusiastic reaction from the rambunctious crowd, the panel got down to business.

Season 7 was rough for our faves—after getting a brutal crash course on Negan’s reign of terror, “Rick is getting his groove back,” said Lincoln.

Negan is different from any villain—or any character—that has been seen on the show so far. Morgan acknowledged his character’s ruthlessness, along with the fact that he’s just plain “fucking smart,” which is why he’s been so difficult to vanquish.

The rest of the Alexandria Safe Zone representatives on the panel agreed that they were ready to take action against the show’s most formidable big bad, including McBride’s character Carol. Carol has overcome a series of unbelievable adversities, both pre-apocalypse and post, including being tethered to an abusive husband and losing her only daughter. Rather than allowing herself to be defined or limited by these things, however, Carol is stronger than ever.

“She’s ready to fight. She’s capable and she cares; her heart is always in the right place. She sees things no other characters see,” said McBride on Carol’s character and her season 8 mentality.

As a female fan of a genre show that doesn’t always get it right, it is beyond refreshing to see a character like Carol survive and evolve as long as she has: she’s a femme with a tender heart who’s been dealt a difficult hand, but who is also valued enough by the show’s writers to experience real growth. In a way, she’s the group’s atypical moral compass—whose morality shifts to accommodate the situation—and a great example of a fleshed out, fascinating, utterly human character to whom everyone can relate. Plus, lead male characters from Rick to Daryl to Morgan to Ezekiel often defer to her judgment, or at least ask her opinion, and treat her like the valued community member and badass fighter that she is.

Though lady faves Danai Gurira (Michonne) and Lauren Cohan (Maggie) were woefully absent from the panel, it was Katelyn Nacon’s (Enid) first Comic Con. The fans eagerly welcomed her, and her discussion of Enid’s evolution throughout the show from her first appearance in the fifth season. Of her standing within the main group, Nacon says Enid’s motto of “just survive somehow” has become “just survive somehow for the people around [her]”, who have become her family.

It’s not just the women who are growing as characters. Morgan promised us snippets of Negan’s backstory, which will hopefully flesh him out as more than just an evil nemesis on the show. James’ character Morgan will be grappling with the reconciliation of his reality of imminent war with the Saviors and his staunchly upheld philosophy that all life is precious, and that killing is unnecessary. Like Carol, Morgan has overcome untold adversities to ultimately serve as a gauge of humanity for the group.

In addition to character growth, family and trust were also recurring themes throughout the panel. Amelio was a good sport when the audience loudly proclaimed that they do not trust his character Dwight, who we last saw claiming to want to help the Alexandria crew to defeat Negan. Amelio laughed, “At least you have to admire his ballsiness.” I don’t know about all that … but we’ll find out if he’s for real soon enough.

The cast’s tight-knit nature was evident in the way they riffed off of one another, transmitting the joy they get from making the show to the fans who love loving the show. As usual, they were beyond good to their fans, allowing lengthy time at the end of the show for fan questions.

One fan asked Reedus and Payne about the potential for a Daryl/Jesus romance, something that a decent-sized fandom contingency has been not-so-quietly hoping for since the latter’s first appearance in season six. After some charming hair-stroking and hand-holding (and even a little hand kiss), the fellas shrugged coquettishly and Reedus responded, “Never say never, it is the apocalypse.”

Aside from setting Tumblr shippers’ hearts ablaze, a Daryl/Jesus romance would be totally plausible—Jesus is (awesomely) canonically gay, and Daryl’s sexuality has been heretofore unaddressed. Yup, for eight seasons we have not seen any allusions to one of the lead male character’s sexuality. In a way, that’s kind of nice, but I am hoping for some payoff in terms of LGBTQ+ representation when it finally is revealed. This being said, that show has come a long way in terms of its queer representation, but there’s always room for more. Plus, just sayin’: Daryl and Jesus have some undeniably great chemistry!

As usual, the panel flew by, but we got some adorably dorky Galaxy Quest-inspired dancing from Andrew Lincoln, some righteous preview footage from the 100th episode that recreates one of season one’s most iconic scenes almost shot-by-shot, and a better understanding of what’s to come. It seems like the upcoming storylines will pare down their locations as the communities band together to live up to the show’s latest catchphrase, “All-Out War.”

As I mentioned before, the show doesn’t hit every mark every time, but it is impressive to see how it has grown into a character-driven narrative, and I am looking forward to its continued growth and the stories it has left to tell.

Lexi Cummins is a Philadelphia-based professional writer, film critic, content editor, and secret alien life form. When she isn’t moshing her way to the front of a heavy metal concert or aggressively loving & dissecting the latest installment in the Saw movie franchise, she is known to hula hoop professionally. Her piece on queer representation in The Walking Dead was published in the most recent issue of The Walking Dead Official Magazine (on 9/26/2017). Follow her nerdy adventures on Twitter and Instagram.