Is There Only Room for One Interracial Relationship at a Time on The Walking Dead? 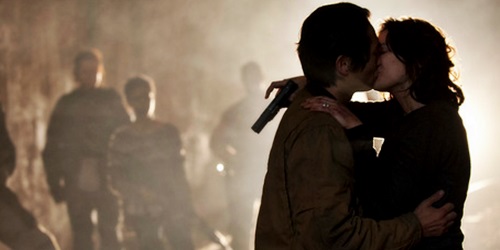 The Walking Dead’s torture-fest of a season seven premiere sent many long-suffering fans running for the hills. It was indeed shockingly and unnecessarily gory. It left us with two beloved characters dead: horrifyingly, heartbreakingly dead. (Spoiler alert here. If you haven’t watched the episode yet, turn away now.)

Last season’s cliffhanger ending warned us that a Major Death was coming, and fans spent the summer speculating on who it would be. We knew Rick, Carl and Daryl would likely be safe, since fans were already on the edge of revolting and taking one of them out would set them tumbling over the edge. So it was, in a way, not surprising that the show’s writers had to follow up on their threats and kill off Glenn, after teasing us with a brief moment of, let’s admit it, relief when we thought Abraham would be the only one to die.

But let’s think for a moment about the reasoning behind the offing of these two characters in particular. Here’s what struck me, viscerally, as soon as the episode finished: Both Glenn and Abraham were in interracial relationships. Glenn and Maggie’s marriage offered viewers a reassuring continuity in the chaotic post-apocalyptic drama of the show. Abraham and Sasha, after making googly eyes at each other all last season, finally got their heads straight, and it looked as though those two tough kids were going to make a go of it.

Here’s the thing: it seems that now Richonne is finally a thing, the show only has room for one major interracial coupling. It certainly took Rick and Michonne long enough to get together, too, after viewers had to suffer through Rick’s blessedly brief infatuation with the insipid, blonde, entirely-wrong-for-him Jessie. There was plenty of backlash, though, from internet wogs aghast at the idea of a dark-skinned black woman hooking up with the show’s home-bred white boy.

The Walking Dead has had a race problem for a while. Earlier seasons killed off black male characters with abandon. Remember T-Dog? He was barely a blip of a caricature in seasons one through three who straight up disappeared from the show for months at a time, only to be reprised, given a heroic death, and promptly forgotten. Bob and Noah lasted a few episodes each, and their truncated stories gave rise to the idea that The Walking Dead only has room for one black male character at a time. Tyreese had a better story arc, but he too died in a Season Five that couldn’t hold onto its black male characters to save its life.

That leads us to Tyreese’s sister, Sasha, and her burgeoning love affair with Abraham. The two shared a toughness and endearing honesty with each other. But their romance was barely getting started after Abraham called it quits with Rosita, another interracial relationship. Romance has never been a major driving factor in the show’s storyline, but why conjure up an unnecessary and awkward love triangle between a white man and two women of color, only to abruptly kill off one of the triad? It begins to reek of ill-conceived and poorly executed attempts by the writers to shout “Look, we’re so diverse!”

But what about the (awfully named) Gleggie combo, you say? Glenn and Maggie had a genuine, stable and non-controversial love match. To the show’s credit, the characters’ racial differences were never played for dramatic effect…which makes my suspicious mind wonder why it’s more socially acceptable for the show to have a longstanding, committed and happy relationship between a Korean-American man and a Caucasian women than just about any other interracial pairing. And again, why this particular interracial relationship had to end just as another strong pairing (finally) begins.

Finally, will TWD’s “One Social Issue at a Time” agenda carry on to the next generation? Glenn and Maggie’s child is critically endangered, as is Maggie herself, as of the season seven premiere. The show does have a tendency, realistically enough in a post-apocalyptic zombie haven, of offing kids. Rick and Michonne have both had children, so the possibility is definitely open for a Richonne baby. And although there’s plenty of room in Alexandria, I doubt a nursery full of babies is in the show’s future. If I haven’t stormed off after another gorefest, I’ll be watching future episodes carefully to see what’s next.

Mickey Lyons is a Detroit-based freelancer who thinks far too hard about representation in pop culture for someone who doesn’t own a TV. You can find her online at ProhibitionDetroit.com and very occasionally on Twitter @ProhibitDetroit.